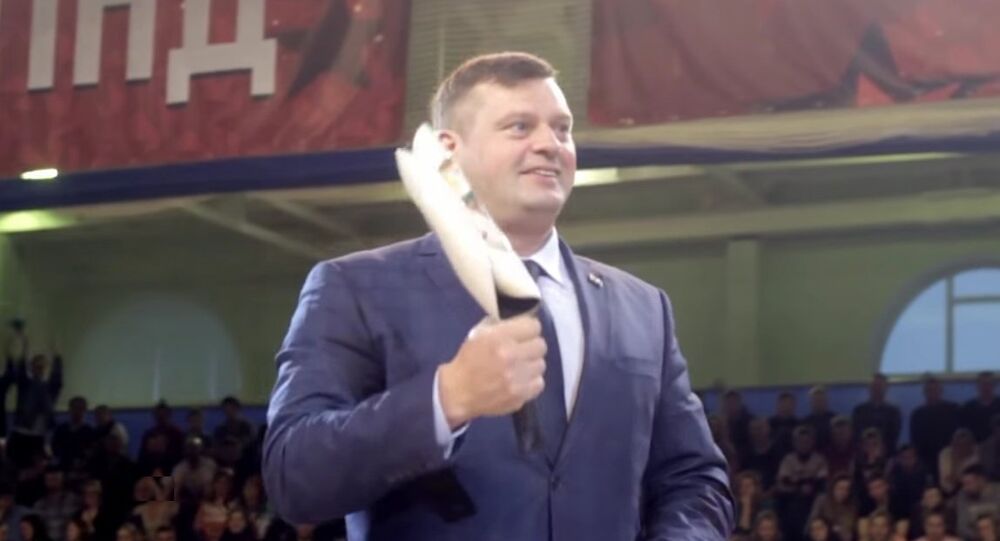 Guinness World Record title-holder Alexander Muromsky demonstrated his superhuman strength at a basketball match in Oryol, Russia. The excited public gave him a round of applause, as he twisted the metal pan into a tube.

During one of the timeouts at the all-star match of the Association of Student Basketball (ASB), which took place in Oryol on January 28, Alexander Muromsky came out on the court and rolled a frying pan into a tube in a few seconds.

According to the official website of the Association, the rolled skillet was then presented as a souvenir to Russian Justice Minister Alexander Konovalov, who chairs the ASB.

© Sputnik / Alexander Kondratyuk
Russian Samson: Famous Strongman Sets Record Carrying Piano on His Back (VIDEO)
Muromsky works in the administration of the Oryol Region and heads the Department for Physical Culture and Sport. The strongman also leads an extreme athletic show of Russia's strongest men "Russian Bogatyrs," where he performs 50 different stunts together with his partners. Rolling pans is one of those tricks, which has already become Muromsky's trademark and was registered as a Guinness World Record in 2008.

Altogether, Alexander Muromsky holds nine world records officially registered by the Guinness committee. The latest one was set in Orel in May 7, 2015, when he bent 12 thick metal rods on his head in one minute.