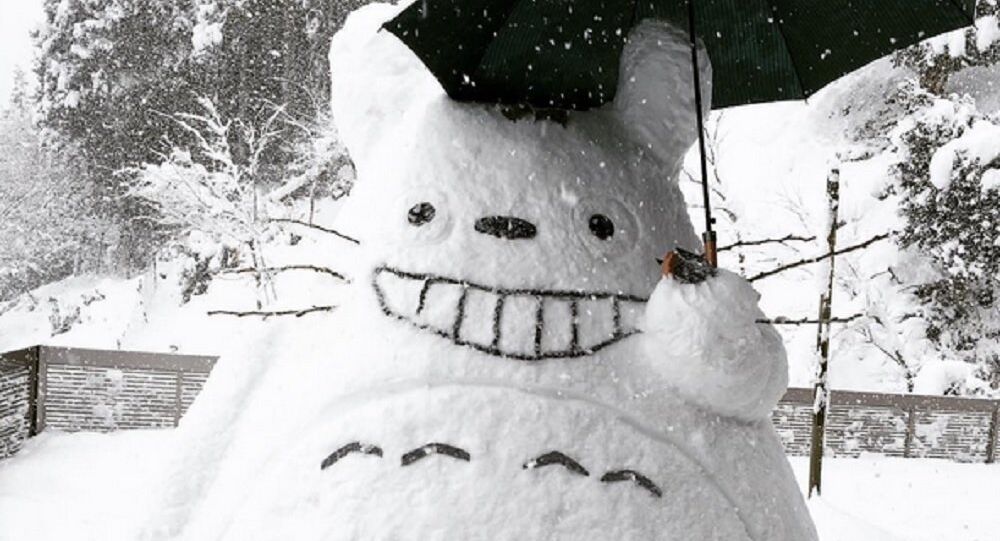 The largest and most impressive winter event in Japan is the annual Sapporo Snow Festival in Hokkaido which features hundreds of enormous snow and ice statues and attracts thousands of visitors every day. However, this winter the Japanese have no need to go far to that northern island in order to see some dazzling snow sculptures.

After the heavy snowfall that hit Japan in recent days, the sculptures are everywhere.

Japan’s main island of Honshu usually has some snow around the New Year, but most often it melts after its falls. The southernmost island of Okinawa is classed as sub-tropical, which means that normally there is no snow at all. Only Hokkaido, which lies in the north, has actual winters. But this January brought heavy snowfall and freezing temperatures to many regions of the country, especially along the Sea of Japan coast.

Heavy snowfall left 3 dead and 300 injured on Sunday, the coldest day this winter in Japan, local media reported. However, those who remained healthy and sound rejoice now in banks of fresh snow all around the country and use it to bring their favorite characters to life.

Totoro from the Studio Ghibli anime film My Neighbor Totoro is one of the simplest yet most adorable snow sculptures we have found, especially when it is big enough to hold an umbrella, just like in the cartoon.

Another snow Totoro was found next to a bus stop, just like the movie character did.

Another Studio Ghibli character which came to life after the snowfall was the enormous larva known as Ohmu from Nausicaä of the Valley of the Wind.

No Face from the famous Spirited Away changed his usual jet-black garb to a pure white robe in celebration of the fairytale-like snowfall.

But Ghibli characters weren’t the only ones to grace the streets to enjoy the white wonder of nature. Here Winnie the Pooh comes!

A couple of Minions went for a walk as well.

Some sculptures impress with their size, like this enormous figure of popular children’s character Anpanman.

The Colossal Titan from the manga Attack on Titan looked really threatening at night.

Godzilla, however, does not appear to be giant, but the resemblance is striking.

​Lots of Pokémon have been caught and frozen on the streets. The famous Pikachu is not so hard to catch if it is made of snow.

While the elaborate details in this likeness of Blastoise are really impressive.

As for Baymax, it was just made to be turned into a snow creation.

Some 60 Flights Canceled in Japan Due to Heavy Snow

Off the Rails: Snowman in Germany Causes €5,000 in Damage to Train