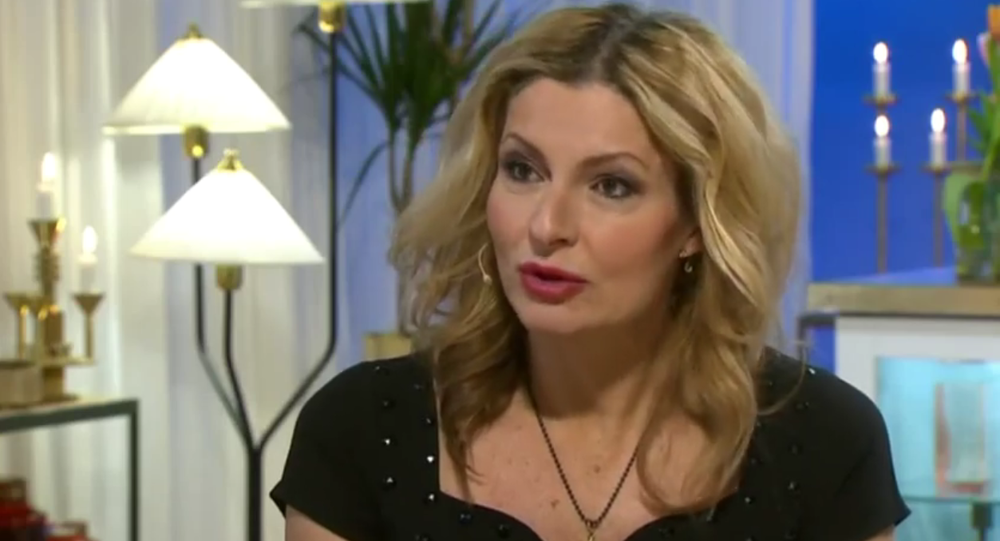 Swedes pride themselves in their traditions of liberty of expression, yet sometimes prove reluctant to accept other people's free speech. Dissenting journalist Katerina Janouch who last week painted an embarrassing picture of Sweden found herself the victim of a witch hunt quite unbecoming of a free country, such as Sweden.

© Wikipedia / Thron Ullberg
Dissenting Swedish Journalist Gets Lambasted for 'Spreading Russian Propaganda'
Last week, Czech-Swedish journalist, author and children's writer Katerina Janouch shared her grim view of the situation in Sweden, which many Swedes found humiliating and insulting. Janouch's personal impressions of Sweden's failed multiculturalism, which she shared to digital Czech TV channel DVTV, resulted in a hateful media campaign in Sweden. In addition to being accused of "spreading Russian propaganda," Janouch had her books removed from Swedish book shops in a shocking campaign against dissent.

"It may be that her political views are not visible in her cute books, but my firm conviction is that I do not want to support her work in any way. Instead, I'm choosing to fill my shelves with books by authors who do not encourage fear and hatred," Lietoff Schüssler wrote.

Actress and Stand-up comic Elina Du Rietz went even further by tweeting that she would have burned Janouch's books if she had had any. Katerina Janouch alluded in her answer to the infamous book burnings by Nazis in the 1930s. "I'm glad that I don't have the nice books of mine in this fascist bookshop," Janouch wrote, referring to Läslusen.

​"Contacting employers of people whose opinions one dislikes is unfortunately a growing trend, which is also being facilitated by social media. This is an alarming development that happens to politicize people's livelihood and privacy. Publishers and booksellers are of course free to sell or publish the books they want, but I cannot think of anything poorer than a bookstore that only sells books by authors it agrees with politically," Aftonbladet's columnist Mattias Svensson wrote.

"For those of you who intend to give public opinion, there are some important things to consider. First, it is important not to say anything that goes beyond the opinion corridor or contradicts public opinion if, unless you are prepared to pay a price. There is a great risk of damnation, which will greatly reduce your future options for expressing yourself. Also, your old enemies will seize the opportunity to kick you when you are already down," Stig-Björn Ljunggren wrote in an opinion piece in Expressen.

"It is sad that a children's book shop sends out such signals, listening to those who demonize me. I have not said anything derogatory about anyone in particular. I only have criticized the decisions that have put Sweden in a difficult situation. All I have said are plain facts," Janouch retorted, as quoted by Swedish newspaper Uppsala Nya Tidning.

© Flickr / Anders Lejczak
Fear of Rape on the Rise Among Swedish Women, Study Finds
In her interview with DVTV, Janouch vented her own feeling of insecurity, which is happens to be totally in line with recent statistics which reveal that a third of Swedish women appeared to suffer from anxiety due to higher crime rates, particularly sexual assaults. Furthermore, Janouch described Swedish multiculturalism and diversity as some sort of symbolic man-made hell, touching upon such "taboo" issues as ethnic ghettos, sex-related violence and religious extremism, all of which are aggravated by migration.

Czech-born Katerina Janouch (originally Kateřina Janouchová) is a Swedish author, journalist and children's writer. In Sweden, she is known to a wider audience as a contributing sex advisor in a number of Swedish newspapers.