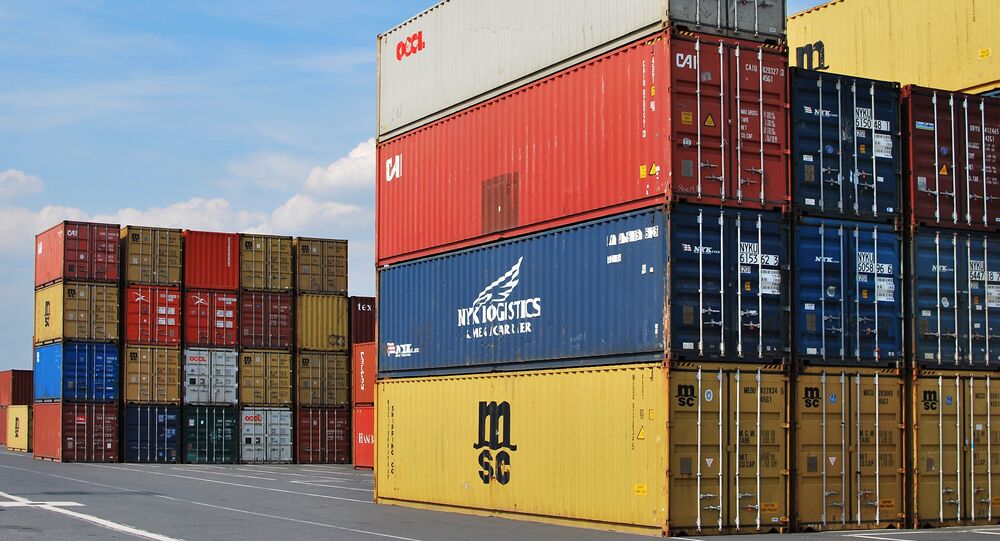 Despite its sturdy welfare economy, Sweden is suffering from an acute housing shortage, which has hardly improved since the Nordic country became an attractive destination for tens of thousands of migrants in need of shelter. Having tried modular housing, Sweden is switching to such unorthodox methods as scrapped containers as future homes.

© AFP 2020 / JONATHAN NACKSTRAND
There's No Place Like Home: 'New Swedes' to Move Into Cities of Their Own
The rampant housing shortage in Sweden is calling for drastic solutions. The severe lack of housing across the country has pushed the demand for simple, affordable homes to the limit. While modular homes are tried as a panacea in parts of Sweden, the northern city of Skellefteå, where winter temperatures of under 20 degrees Celsius are not uncommon, is pioneering the use of scrapped steel containers as the future of housing.

At present, exports from China to Europe are much greater than imports, which accounts for the surplus of Chinese containers that has piled up in Sweden. In the US, the UK and the Netherlands, thrashed containers have been successfully converted into homes. Today, Swedes intend to follow in their footsteps to plug the gaping holes in their housing market. In the first place, the low-cost housing is intended as accommodations for refugees, as well as for the young homeless.

"We looked up on the Internet how homes like this are built in the United States, and were inspired by their recycling ideas to make affordable, small accommodations of our own, Peter Eriksson, CEO of Svenska Containerhus in Skelleftea, told Swedish national broadcaster SVT.

© Photo : Pixabay
Homelessness Snowballs in Scandinavia as Side Effect of Migrant Crisis
The new 26-square-meters-large homes are aimed at Swedish municipalities, housing companies, campgrounds and private individuals as future clients. With a price tag of slightly above 400,000 SEK (about $45,000) this is more than affordable housing by Swedish standards. However, additional expenditure on the plot, sewage and electricity are to be paid for by the customer.

Previously, this type of accommodation has been tried several times in Stockholm and southern Sweden. The idea had mixed success, but attracted significant criticism of the building quality, which compelled the city of Helsingborg to scrap plans for 100 container homes. This painful experience, however, would not deter Peter Eriksson.

"We build homes adapted for the Nordic climate. Besides, the containers are designed for a serviceable life of 20 years at sea in the wind and salt water. These homes are also easy to move," Eriksson said.

© Flickr / Anders Lejczak
Desperate Sweden Banks on Hotels to Combat Homelessness, Housing Shortage
According to Swedish housing portal Hur vi bor ("How we live"), nine out of ten Swedes live in a municipality that is suffering from a housing shortage. According to previous estimates by the Swedish Housing Board, a total of 710,000 new homes will be needed in Sweden, a nation of roughly 10 million, by 2025.

The lack of homes is most severe among newcomers. According to the Swedish tabloid newspaper Aftonbladet, Swedish municipalities currently plan to invest nearly 100 million SEK ($11.2mln) in procuring apartments for new arrivals.

Across the country, various means of combatting the housing shortage among "new Swedes" have been tried, from conveyor-built modular housing to temporary renting of villas, hotel rooms and cruise ships. In December 2016, Stockholm tried accommodating newcomers in dormitories, where up to 16 people sleep jammed in a single room. The dormitory lacks kitchen facilities, and all the food is delivered there.

​"Here I can neither study nor sleep. Everything is so difficult," A frustrated Gidey Germay, a refugee from Eritrea, told local news outlet Stockholm Direkt.