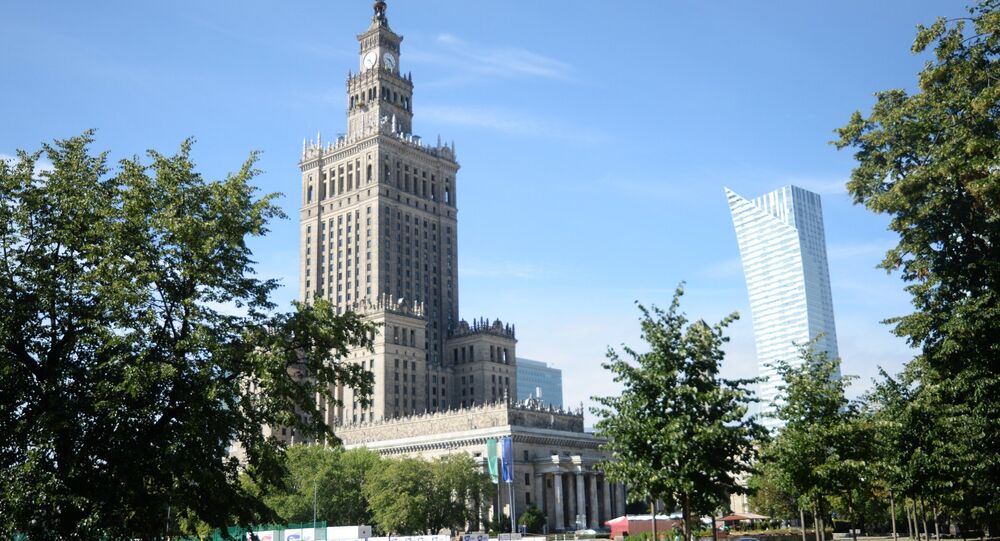 Last year, Warsaw authorities celebrated the 60th anniversary of the Palace of Culture and Science, a monolithic, 42 story, 778 ft tall Stalinist high-rise in the heart of Warsaw. The building's controversial history has led to conflicting attitudes among Poles: some value it as a historical landmark; others call it a relic of Soviet domination.

The Palace of Science and Culture continues to hold the record as the tallest building in Poland. At any one time, only a few dozen of its 3,288 rooms and offices are occupied by companies and public organizations. The Palace is a major cultural center, and a regular home to concerts, theater performances and film screenings. As its name implies, it is also a major academic and scientific center. It houses libraries, scientific institutions, and academic conference halls belonging to the Polish Academy of Sciences.

The building's architectural style has been described as a mix of Polish historicism and American art deco, although it was designed by Soviet architect Lev Rudnev, and the building is widely considered as the eighth, 'lost sister' to Moscow's Stalinist Seven Sister skyscrapers. As expected, the building's roots in the Soviet period have led to public debates about whether the building is worth the upkeep, or whether it should be dismantled and replaced with something modern.

The construction of the Palace of Culture and Science began in May 1952. The building was officially conceived as a gift to the 'brotherly Polish people' from the people of the Soviet Union. As the term implies, design and construction expenses were covered by the USSR, and an estimated 5,000 Soviet construction workers and engineers joined 4,000 Polish ones to complete the project over a three year timeframe.

As a recent RIA Novosti article on the building recalls, even at the planning stage, two questions were at the forefront: the building's ideological significance, and heated debates surrounding its design.

© Sputnik / A. Novoselskiy
The Palace of Culture and Science in 1955.

Officially, the idea for the skyscraper was thought to have been conceived personally by Soviet leader Joseph Stalin; it was first discussed with Polish authorities during a visit to Warsaw by Soviet Foreign Minister Vyacheslav Molotov in 1951. Warsaw chief architect Josef Sigalin was informed of the proposal, and Polish architects were soon tasked with coming up with several possible locations for the building, and providing the chosen territory with the necessary infrastructure, including electricity, water and accommodation for the Soviet construction workers. Unsure of how the final design would look, architects oriented their proposals around the then-new Moscow State University building.

The building's impressive height owes itself to intense lobbying by Polish architects. At the design stage, Soviet architects proposed a height of just 120 meters, but Sigalin and his colleagues insisted that it be much taller, settling on 237 meters, including the Palace's spire. This would make the Palace of Culture and Science taller than all of the Seven Sisters in Moscow, with the exception of Moscow State University, which edged out the Palace by just three meters. Polish architects were also able to successfully incorporate elements of Polish national architecture into the skyscraper's 'Stalinist Gothic' look.

© Flickr / Michel G.
Russia Wants to See Poland as Strong, Independent Partner – Putin
The building was designed and redesigned repeatedly. The final proposal came to include everything but the proverbial kitchen sink, featuring scientific, research, museum, exhibition and theater complexes, as well as a Palace of Youth.

Following its completion in July 1955, the building, which housed the Polish-Soviet Friendship Society, became a must-see destination for foreign officials and tourists. The building featured the tallest viewing platform in the country on its 30th floor. In 1955, the building was unofficially inaugurated when it hosted the Fifth World Festival of Youth and Students.

In the 1960s, 1970s and 1980s, the Palace hosted historic concerts by artists including Marlene Dietrich, Yves Montand and Leonard Cohen. The Rolling Stones held their first concert in an Eastern Bloc country at the Palace in 1967. The building was visited by leaders including Nikita Khrushchev and Ho Chi Minh, and was rumored to have been greatly admired by cosmonaut Yuri Gagarin.

In the late 1940s and early 1950s, as Warsaw was painstakingly rebuilt from total devastation caused by the Nazi occupation, city architects came to terms with an odd fact: the Polish capital did not have a city center as such. The old city's Castle Square, the historic square in front of the Royal Castle, is widely considered as a central tourist attraction. But as RIA Novosti pointed out, it is near the Stalinist high-rise that the bus stop simply called 'Center' is located. The Palace is often the first tourist photo snapped in the Polish capital, and draws attention to itself for those arriving at the Warszawa Centralna Railway Station.

© Sputnik / V. Lvov
Vintage photo of the Palace of Culture and Science.

The Palace has become a favorite landmark of souvenir makers, with shops featuring magnets, cards and miniatures of the building, in an assortment just as wide as trinkets featuring other popular locations, including the Old Town, Sigismund's Column, the National Stadium and the Warsaw Barbican.

After the collapse of the Soviet Union and the Eastern Bloc, a competition was announced to redevelop the Palace, but none of its radical proposals ended up getting implemented. Until the present, the building has remained virtually unchanged, with the exception of the removal of a dedication to Stalin and a few minor design elements.

The Palace is owned by the city of Warsaw; its halls, once filled with references to Polish and Soviet socialism, now house corporate offices, shops, travel agencies, restaurants, several theaters, exhibitions and the offices of research institutes and universities. The building's central location, transport accessibility, and wide use as a landmark that is visible from across much of the city, makes it a popular location.

However, for some the building's legacy continues to generate resentment. In the 2000s, then-Foreign Minister Radoslav Sikorski became one of the most active proponents of the building's demolition. In 2008 he suggested that demolishing the Palace of Culture and Science and replacing it with a green area and a pond "would do more good for the residents of Warsaw" than keeping it in place. In 2009, Sikorski tried to connect the demolition with the anniversary of the 1989 fall of the Berlin Wall. He tried again in 2012, proposing the creation of a Central Park of Warsaw, saying the building was uneconomical, energy-inefficient, and expensive to repair.

© AP Photo / Pavel Golovkin
Alexandrov Ensemble Tragedy on Everybody's Lips All Over Poland
Polish media soon began poking light fun at the politician, comparing him with Ancient Roman senator Cato the Elder, who finished all his speeches in the Senate with the phrase "Furthermore, I consider that Carthage must be destroyed," with the Palace taking the place of Carthage in this case.

Sikorski's proposals were met with opposition among city residents. For some time, at bus stops and on building walls, graffiti appeared depicting the Palace and the phrase 'Gifts are not returned'.

Other, less radical ideas have been floated, from proposals to repaint the building, to one proposing complementing it with a chic hotel, to another suggesting that the building be surrounded with ivy. After each proposal, local media queries Poles' views on the ideas, with the option 'leave it alone' always coming out on top.

Right-wing organizations regularly hold campaigns against the Palace, explaining that it is really a "symbol of Polish dependence on the USSR," and that it was built so that Poles "never forget their dependence on the Soviet empire."

© Sputnik / Mikhail Voskresenskiy
The Palace of Culture and Science today

These appeals have been met with a response from Polish historical heritage laws. In 2007, the building was entered into the registry of monuments. That decision led to an outcry from some media, cultural and academic figures, and calls for the president to hold discussions or even a referendum on the building's fate. Others, however, including architects and art historians, wholeheartedly support the legal protections, saying that the building has already lost the integrity of some of its design elements, and that it is now the last major surviving example of socialist architecture in the Polish capital.

Polish Authorities Knew About 'Coup Attempt' Ahead of Opposition Protests