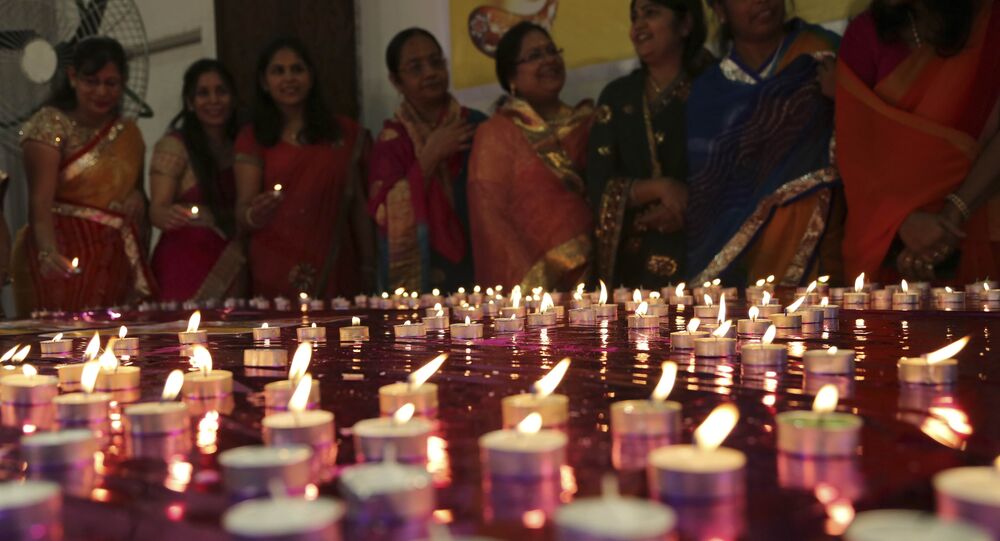 The New Year's Day, observed on January 1, is, probably, the most celebrated public holiday. What is known about New Year traditions in India?

NEW DELHI (Sputnik) — Does January 1 have the same meaning for the Indians, and if not, when do they celebrate the New Year?

One can often hear that the Indians celebrate the New Year in October-November during the Hindu festival of lights, Diwali. This holiday is actually considered the most important in India and is celebrated in the best traditions of the Western New Year's Day, with fireworks, joint meals, exchange of gifts, and seasonal discounts.

© AP Photo / Wong Maye-E
Indian Prime Minister Modi to Celebrate Diwali With Army at Pakistani Border
Diwali is one of the few Indian festivities to receive coverage in the foreign media, largely due to the feverish seasonal shopping. Many Indians give each other jewelry, often gold. The demand in India is so high that it even affects world prices for the precious metal. Omnipresent fireworks do not only attract foreign tourists, but often make it to the news due to the sharp rise in the fire accidents and the level of air pollution.

However, Diwali is not what one may call the Indian New Year. It is celebrated as the New Year by the Jainism followers, who comprise 0.37 percent of the population, or 4.5 million according to the last census. The first day after Diwali, called Bestu Varas, is the New Year in the Indian state of Gujarat.

© AP Photo / Ajit Solanki
Indians light lamps at Akshardham temple on the eve of Diwali, the festival of lights, in Gandhinagar, India. (File)

India became an independent nation in 1947, following partitioning of the British Indian Empire. Today, various ethnic groups speaking hundreds of languages and dialects, and followers of radically different traditions and cultures, do live in the country together.

© Flickr / Edmund Gall
Which Traditional Russian NYE Food Should You Try?
Christians, who comprise 2.3 percent of the Indian population, or 27.8 million people, celebrate the New Year on January 1. They constitute the majority of the population in three north-eastern Indian states of Nagaland, Mizoram and Meghalaya. There are Christian communities in Goa, in the southern states of Kerala and Tamil Nadu. In addition to the New Year, Christians in India also celebrate Christmas.

For the Muslims, the second largest religious group in the country, comprising 14.3 percent or 172 million people, the New Year is celebrated according to the Islamic calendar, which is based on lunar phases and therefore has a floating date. Last Islamic calendar year began on October 3, while the next one will begin on September 22. However, the New Year is not a big holiday for Muslims, and remains largely ignored.

Buddhists in India, who comprise 0.7 percent of the population, or 8.4 million people, usually celebrate Tibetan New Year, also known as Losar. Its date is also determined by the lunar calendar. The next Tibetan calendar year will start on February 27. It should be noted that there are several branches in Buddhism which have different traditions of determining the New Year's date.

© Photo : Youtube/Sputnik
New Year's Eve: World Welcomes 2017
Sikhs, who comprise 1.72 percent of the population, or 21 million people, celebrate the New Year on March 14 according to the Nanakshahi calendar but the Vaisakhi festival celebrated on April 13-14 has more importance for this religious group. According to the Punjabi calendar, Vaisakhi is also the Punjabi New Year.

The New Year is also celebrated in mid-April by a part of the dominant religious group of Hindus, who comprise 80 percent of the population, or 966 million people. Another part of the Hindus celebrate the New Year on April 8. However, technically, it is just the date of holiday, but not the date of the beginning of the year. The day when the new year begins is being determined in different regions according the local traditional calendar, but generally it is March 22, the day after the spring equinox. In a leap year, the date is March 21.

Thus, due to the diversity of traditions, the concept of a single national New Year does not exist in India, one can only talk about Indian New Years.

Many religions and local traditions is only the part of the answer why the New Year is not the most important holiday in India.

A well-known Indian scholar, the president of Indian Council for Cultural Relations, Lokesh Chandra, explains that the key factor in determining the New Year dates in India is based on agricultural work.

City dwellers, usually westernized Indians, do celebrate the New Year on January 1, but it is limited to "dancing and drinking," the professor added.