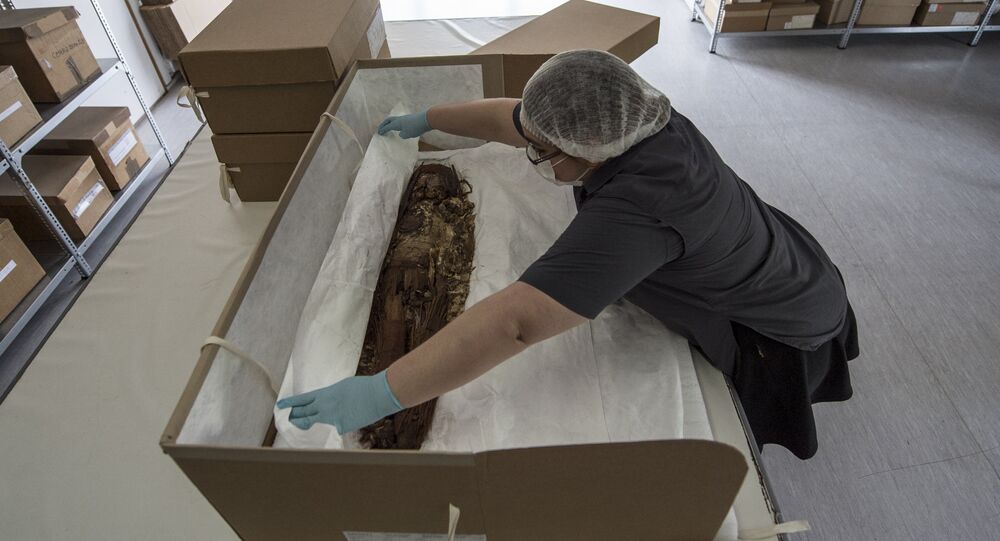 For Science! World’s Oldest Mummies Get a DNA Scan

Chilean researchers conducted an extensive genetic analysis of mummies embalmed by the Chinchorro people over 7,000 years ago.

© AFP 2020 / MOHAMED EL-SHAHED
From Pyramid Builder's Diary to Queen's Legs: Top Five Egyptian Archaeological Sensations of 2016
As part of an enterprising project conducted by Chilean researchers, 15 mummies embalmed by the Chinchorro were taken to the Los Condes clinic in Santiago and subjected to DNA analysis and a computer tomography scan.

The scientists hope to learn what the Chinchorro looked like while alive, and to possibly unveil other mysteries surrounding this ancient civilization by studying the mummies’ genetic structure, according to science news website Phys.org.

"We want to better understand their way of life—from their diet to whether we Chileans still carry their genes," said Veronica Silva, chief of the anthropology department at Chile's National Museum of Natural History.

The scientists intend to virtually dissect the mummified remains without touching them in order to further preserve the remains in digital form.

The Chinchorro were sedentary fishermen who inhabited the Pacific coastal region of current northern Chile and southern Peru from 7,000 B.C to 1,500 B.C. The Chinchorro culture is famous for its mummification practices as Chinchorro are believed to be one of the first people in the world to mummify their dead.

During the mummification procedure, which apparently evolved over the ages, the Chinchorro would first remove the skin and muscles of the deceased. Then, using materials like plants and clay, they would reconstruct the body around the skeleton, sewing back the previously removed skin afterwards. A mask was then placed on the mummy’s face, and the process was complete.

Interestingly enough, it appears that the Chinchorro culture left no trace of its existence save for the mummies, of which some 180 were discovered since 1903.

The researchers also hope to use DNA analysis to determine whether the Chinchorro have some kind of genetic links with the modern-day population of the region.

"We want to better understand their way of life—from their diet to whether we Chileans still carry their genes," Silva declared.