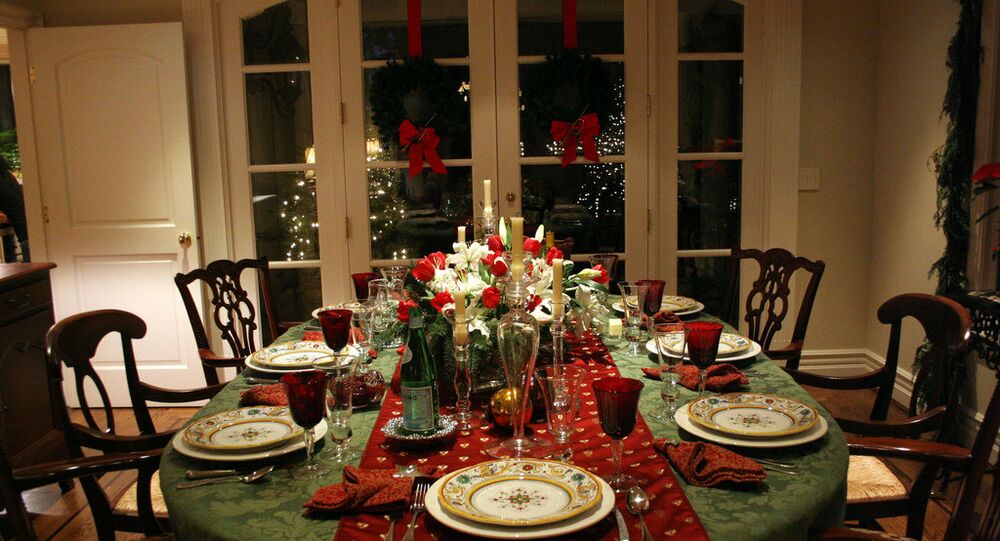 Every country has its national cuisine, but in every country dishes eaten for Christmas dinner have long-standing traditions and some symbolic meaning. Learn more about what is cooked for the festive table around the world.

In Denmark Christmas dinner traditionally starts with a roasted goose stuffed with dried fruit, or baked pork with potatoes and red cabbage. For dessert on this special day Danes have grütze which is thick rice porridge with sweet berry jelly and toasted almonds. They drink glёg and beer.

Nepalese celebrate the New Year in mid-April, according to Hindu religious traditions. This festival called Bisket Jatra is celebrated by hilarious theatrical performances, playing music and throwing color powder to greet passers-by. For a festive dinner on that day people eat traditional dishes of Indian and Tibetan cuisines. The most popular dish called Dal Bhat is made of lentils, tomatoes, onions, ginger, rice and spices.

Like in many catholic countries, in Italy families gather around a festive table on December 24, while the New Year is mostly celebrated by noisy parties in the streets. For Christmas dinner Italian housewives usually cook home-made pork sausages called cotechino which are usually served with lentils – a symbol of longevity, health and well-being.

Mexicans who like spicy and hot dishes usually have for Christmas dinner romeritos consisting of sprigs of a wild plant known as seepweed, also stuffed turkey, corn, beans, and sweet pastries. As for drinks, they prefer light wine, punch, and tequila.

England’s traditional Christmas dish is well-known stuffed turkey with vegetables, and pudding for dessert. Pudding is made from bread crumbs, flour, bacon, raisins, eggs, and various spices. Before serving, they dowse it with rum, set fire to it and put it on the table blazing.

In Vietnam the New Year’s day is called Tết. It celebrates the arrival of spring based on the Vietnamese calendar, which usually has the date falling in January or February. Festive dishes are traditionally cooked from rice and meat. The most popular ones include pork in coconut milk or Banh Chung cake which is a mixture of rice and pork wrapped in bamboo leaves and fried.

It is difficult to imagine French festive table without oysters, foie gras sandwiches, cheese, and French wine, of course. Christmas celebration is not an exception.

Japanese people eat a selection of dishes during the New Year celebration called osechi. Many of these dishes can be kept without refrigeration, since the culinary traditions date to a time before households had refrigerators and most stores closed for the holidays. The Japanese believe that chestnuts bring success in business. Therefore, for the New Year they added chestnuts in desserts such as mochi cakes of rice balls. Kale, peas, beans and herring roe are often eaten on New Year’s eve as well.

​The True Meaning of Christmas Is Theological, Not Calendrical