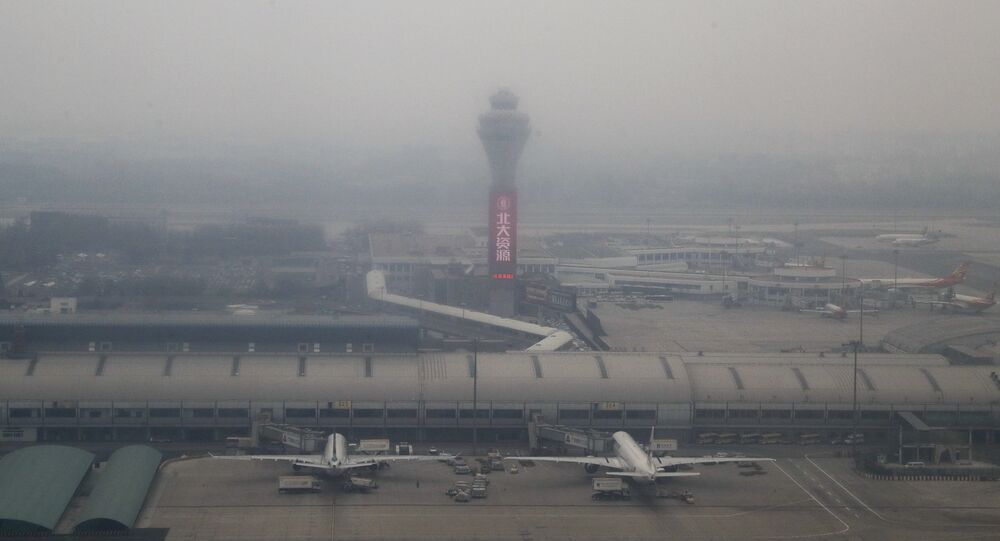 An aircraft belonging to Russian state airline Aeroflot was the only commercial passenger plane able to successfully land in Beijing amid dangerously high smog levels Monday, gaining the admiration of Chinese media.

© REUTERS / Jason Lee
Northern Chinese Cities' Authorities Introduce Car Restrictions Amid Heavy Smog
The "heroic" Russian plane became the only one to actually land among over 60 other passenger aircraft scheduled to arrive in the city late Monday, with other airlines and pilots deciding to turn around or land in other cities.

Chinese media and social media users have since spread a screenshot of an online airport schedule showing the Russian plane lit up in green (successfully landed) amid a sea of red 'canceled' flights.

Aeroflot's SU200 only flight to manage landing in smoggy Beijing between 24:00-3:00 on Tuesday in third victory over haze since 2014 pic.twitter.com/0aUQAGiweq

​Social media users also recalled a similar 'heroic flight' taking place in 2014. At that time, Flight SU200 made eight loops over the course of half an hour over Chinese Inner Mongolia until easterly winds blew away strong smog in the Chinese capital.

Russian AEROFLOT SU200 made 8 circles in 1.5 hours before landing in Beijing on 2:09am Sun due to heavy haze. pic.twitter.com/UcmNITaPmm

China's coastal cities have been known for producing massive amounts of air pollution, partly because the country uses coal-burning power plants, but also because China serves as the so-called 'workshop of the world', producing trillions of dollars-worth of industrially-produced goods that are exported around the world.