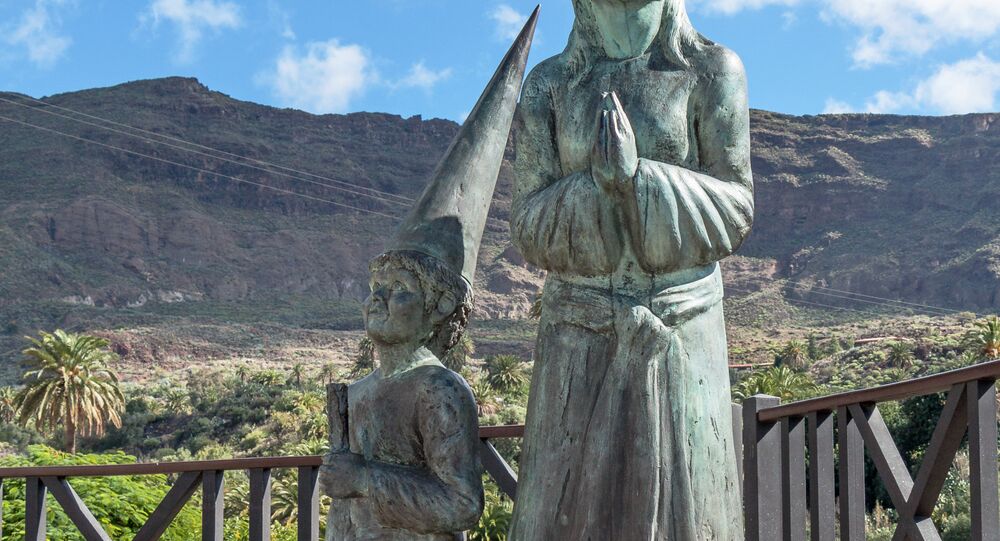 On Saint Lucy's Day, which is widely celebrated across the country, Swedish Police were alerted about a Ku Klux Klan march. Later, callers were reported to have mistaken a Saint Lucy procession clad in white robes for a Klan meeting. Still later, the whole thing turned out to be an internal prank by the police.

© AP Photo / Heikki Ahonen/Lehtikuva
Finnish Anti-Migrant Protester Sporting Ku Klux Klan Robe Walks Free
The whole drama started when regional newspaper Jönköpings-Posten reported that police had been called out to a location in Jönköping municipality after a Swedish Saint Lucy's Day procession was mistaken for a Ku Klux Klan meeting — the only similarities being white robes and lit candles lights. The Klan gathering in a local dining hall was later reported to be an ordinary Saint Lucy's Day celebration. A number of Swedish newspapers, including major dailies, took the bait reporting the incident.

Still later, the whole story turned out to be an inside prank. On Wednesday afternoon, Swedish police issued a press statement explaining that none of the previously reported episodes had in fact happened, not even the call. The misunderstanding proved to be the result of an officer trying to amuse his colleagues with a joke written on the police log. The "Klan meeting" was later accidentally reported to Swedish media by another officer as an accomplished fact, even if he was unsure whether it had actually happened or not.

​"This is not acceptable. You have to be able to trust that the information the police hands out is correct. But sometimes mistakes slip in. In this case it was a joke that came out all wrong," Fredrik Lindfors, head of the police in the Södra Vätterbygden region, said in a written statement.

© AFP 2021 / JONATHAN NACKSTRAND
Disgruntled Swedes Drift to the Right to Protest Migration
Saint Lucy's Day is celebrated on 13 December, commemorating Saint Lucy, a 3rd-century martyr who according to legend brought food and aid to persecuted Christians hiding in the catacombs, using a candle-lit wreath to light her way. The story of a young girl bringing light in the midst of darkness struck home with the Nordic population suffering from dark winter days. Saint Lucy's Day (colloquially known as Lucia) is celebrated with lantern-bearing processions clad in white robes.