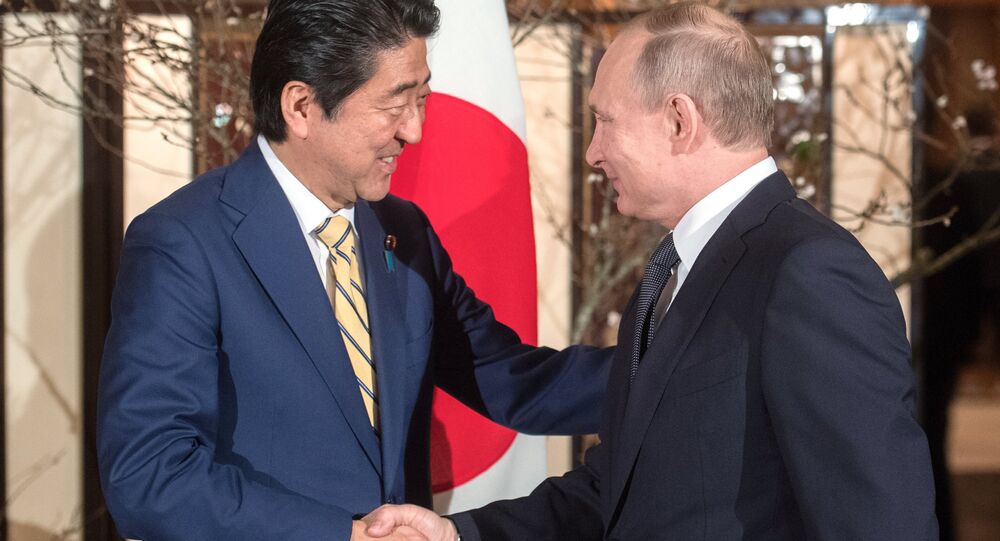 During a meeting with Russian President Vladimir Putin in Nagato, Japan, Japanese Prime Minister Shinzo Abe expressed hope that the Russian leader will have time to enjoy Japanese cuisine and nature during his visit, as well as to relax in hot springs.

At the beginning of the meeting, Abe stressed that he is happy to welcome President Putin to Nagato given the fact that it has been 11 years since the Russian leader visited Japan

"I am very glad that I can welcome you to my hometown of Nagato," Abe told Putin during the meeting. "I want you to enjoy the beautiful nature of Japan and the excellent Japanese cuisine. Maybe, you would like to enjoy one of our hot springs, as well. When you bathe in a hot spring, all tiredness goes away. So after this meeting, I promise that you will be able to relax in a hot spring."

The Russian leader thanked his Japanese counterpart for the offer and replied to it with a joke.

"Thank you very much for the chance to visit the sights of this wonderful place, including a hot spring, which, as you said, is a nice place to relax. But I think it is better not to get too tired," Putin said, laughing.

According to reports, the Japanese PM is also planning to have a dinner with Vladimir Putin, during which both politicians will be served Japanese grilled beef and fugu fish, a dish that is very popular in Japan despite the fact that it contains lethal poison and must be prepared under strict control to remove toxic parts.

© Sputnik / Michael Klimentyev
East Meets West: Brief History of Putin and Abe's Meetings
Earlier on Thursday, the Russian president arrived in Japan. Putin's visit to Japan on December 15-16 is widely seen as a breakthrough in Russia-Japan relations taking into account that it had been postponed since 2014.

Abe and Putin are expected to discuss various issues, including the territorial dispute between Russia and Japan, the potential build-up of the political dialogue, joint projects in the economic and trade sphere and cultural ties between the two countries.