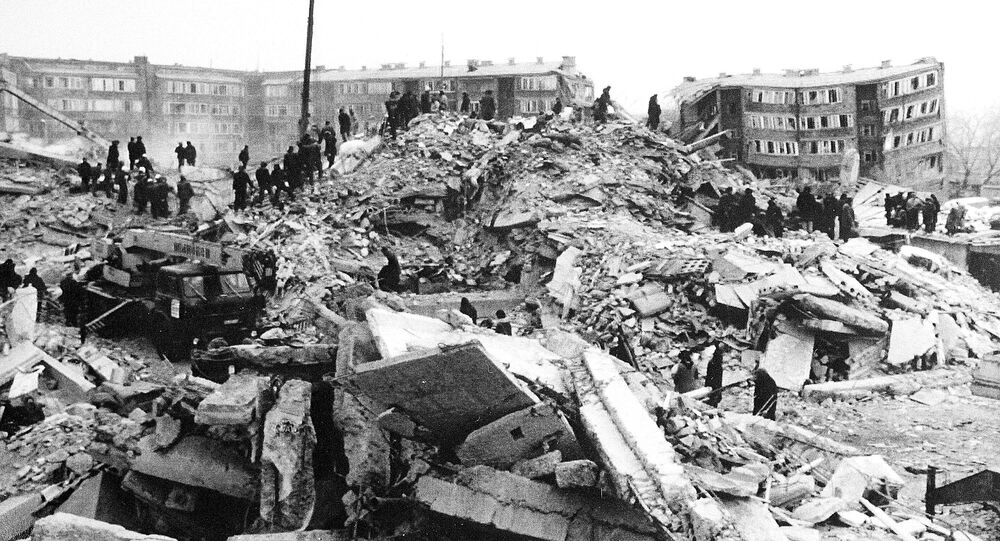 Spitak Earthquake: How Half of Armenia Was Wiped Out Within 30 Seconds

Twenty-eight years ago, one of the worst disasters in the history of Armenia struck northwest of the country. As result of the devastating earthquake, the town of Spitak was almost completely destroyed within 30 seconds. 25,000 people were killed, while 140,000 more were injured.

The 10-magnitude quake struck on December 7, 1988, at 11.41 am and affected more than 300 Armenian settlements. The town of Spitak which was at the epicenter of the disaster was virtually leveled to the ground within 30 seconds. Other cities like Leninakan (now Gyumri), Stepanavan and Vanadzor were partially destroyed.

"There were people standing in front of each destroyed house with strained expressions on their faces. Grief and hope entwined in their souls, in their faces," former First Secretary of the Armenian Communist Party Suren Harutyunyan recalled the terrible events of that day in an interview with Sputnik Armenia.

"At this point, the only goal for people was to find their loved ones, and if fate decided otherwise, to bury them according to the customs of their ancestors," he continued.

The earthquake affected 40% of the territory of Armenia, with 970,000 people living in the disaster area. Most hospitals in the area were destroyed; local medical workers were killed or injured; the electricity supply and water supply systems were also damaged.

All then-USSR republics participated in the rescue operation and the reconstruction of the devastated areas. 111 countries, including Belgium, the UK, Italy, Lebanon, Norway, France, Germany and Switzerland, helped the USSR by providing emergency equipment, specialists, food and medicine.

Over 20,000 soldiers and officers were actively involved in the rescue work, in addition to volunteers. Most of them were in a permanent state of shock. Some were even transferred to mental health facilities to recover from what they had seen during the rescue operation.

"One of the crane workers — who was working at one of the schools — was taken by ambulance to psychiatric facility when he lifted several plates and saw a whole class of dead children. Of course, a rescuer is supposed to have strong nerves and stable psyche. But we're all human. We also had problems with it. The guys could not fully relax after work, they had nightmares at night: one or another jumped up, shouting something," the head of a rescue team Ivan Dusharin said, sharing his memories with Sputnik Armenia.

According to official data, tens of thousands of people were killed by the earthquake. 140,000 people were injured and 500,000 more were left homeless. In the course of 1989-2008, 60,000 people moved into new housing facilities thanks to the financing of local government and international organizations.

In 2008, the government launched a state aid program for the families affected by the disaster. The beneficiaries of the program were 5,381 families. As of November 2016, 4,728 families from this list have new homes.