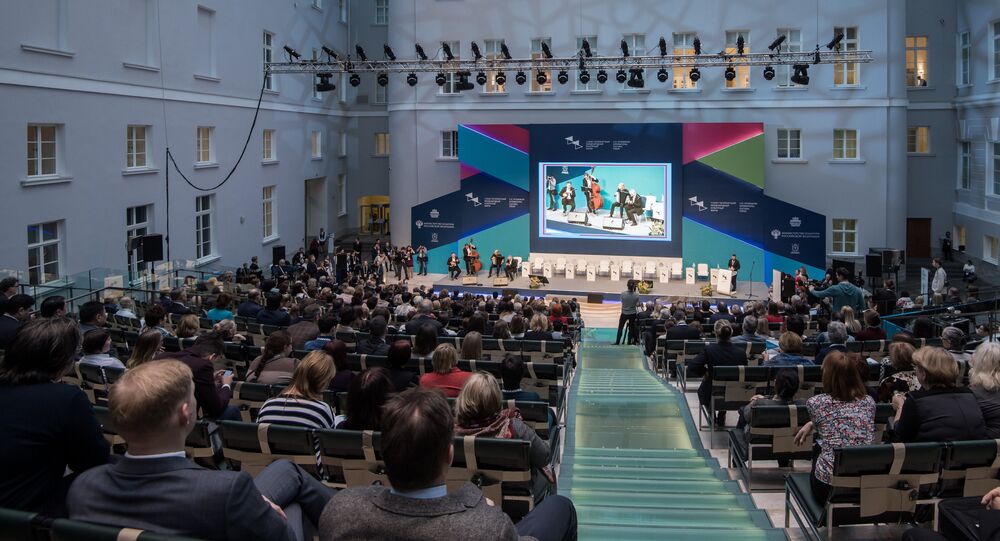 NT Live is something that helps put British theatre before a global audience, including Russia, Emma Keith, Head of Broadcast and Producer at National Theatre Live, told Sputnik.

© Photo : Nikolay Seredin
No Place for Tensions in Culture: Polish, Russians Team Up on Theater Stage
In an interview with Sputnik, Emma Keith, Head of Broadcast and Producer at National Theatre Live, touted NT Live as something that helps get British theatre out to global audience, including Russia.

National Theatre Live is an initiative operated by the Royal National Theatre in London, which broadcasts performances of their productions to cinemas and arts centers around the globe.

Keith's interview came after the fifth International Cultural Forum kicked off in Russia's city of in St. Petersburg, in a three day event that will gather representatives from 82 countries who will discuss key vectors of cultural development.

Asked about what attracted National Theatre Live to the St. Petersburg International Cultural Forum, Keith said that "NT Live is a fantastic way for us to help get British theatre out to a global audience, including Russia."

She added that it was great for them to attend the forum and discuss with colleagues ways of cooperation, again touting the St. Petersburg as "a fantastic opportunity to let people know about NT Live."

She also called for more cooperation between theaters in Russia and the UK in the future, something which he said would be an amazing chance "to show what we do."

She specifically mentioned that being able to communicate and share information with people during this event is especially important in light of the current political situation.

© AFP 2019 / Karin ZEITVOGEL
US Institute of Russian Culture Honors Author of ‘The Icon and the Axe’
The main sites of the forum, which, in particular, is due to sum up the Year of Russian cinema, will be the main headquarters of the State Hermitage, the Russian Museum of Ethnography and St. Petersburg's film studio "Lenfilm".

The St. Petersburg International Cultural Forum has been held since 2012.

It seeks to promote the preservation and development of Russian culture, support cultural initiatives at regional, federal and international levels, and develop international cooperation in the cultural sphere.

Live and Learn: Moscow Foreigners to Immerse Themselves in Rich Russian Culture

Russian Legend: Top 7 Things You May Not Know About the Bolshoi Theater