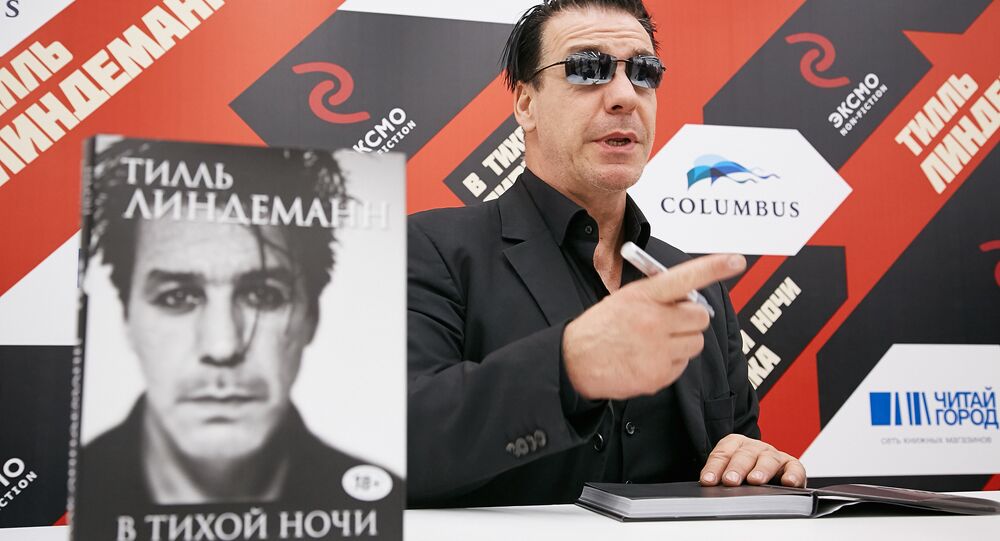 Last week, frontman of the world-famous German rock group "Rammstein" Till Lindemann came to Moscow to present a collection of his poems. In an interview with Sputnik Germany, the German singer revealed details about his newly published book and shared his attitude to Russia and its people.

Lindemann believes that the success of his band in Russia could be explained by the fact that German and Russian languages are quite similar in their structure and pronunciation. In his opinion, it should be much simpler for people in Russia to understand songs written in German, rather than in English.

"I can't explain it [the popularity of the band] in another way. But it's still awfully cool. I am really surprised about it again and again," Lindmann told Sputnik Germany.

With regard to his newly released book of poems, Lindemann said that it was very important for him to publish it in Russian.

"I was insisting on that. First, the book was translated into Dutch. Then, Polish and Swedish. Then English. And all the time I was waiting for a [Russian] publisher that would be interested in it," Lindemann said.

© Sputnik / Vitaliy Belousov
Till Lindemann, lead vocalist and frontman of the Rammstein band, at the presentation of book On Quiet Nights at the Columbus retail center, Moscow

According to the singer, the process took quite a long time. But after a while, Lindemann's team managed to find a publishing house and "suddenly all went very quickly," the musician recalled.

In his opinion, Russian people love poems: they like reading them and are not afraid of reciting them in contrast to many Germans.

"Russians — including girls and women — like reciting poems and are not afraid of doing it. And this is a huge difference between Russia and Germany. I was so happy that it, I mean the lyrics, can find a great response here. In Germany, almost no one is interested in poetry," the musician complained.

In an interview with Sputnik, Lindemann confessed that most of his poems are based on his personal experience.

"You can try to play a role and set your imagination free, but a lot of personal traits, your character traits, will still erupt into a poem. As well as the experience, desires, dreams and nightmares. All these things get into poetry," the artist explained.

Answering the question on his opinion about Russian women, the band's frontman said: "I think Russian women care about themselves very much, regardless of their appearance. They are always very good-looking, fond of fashion, they pay a lot of attention to their appearance, hairstyle. For example, I am very fond of fur. And fur is an integral part of the fashion culture here. Fur is very sexy by itself. And the women wearing fur are twice as sexy," Lindemann stated.