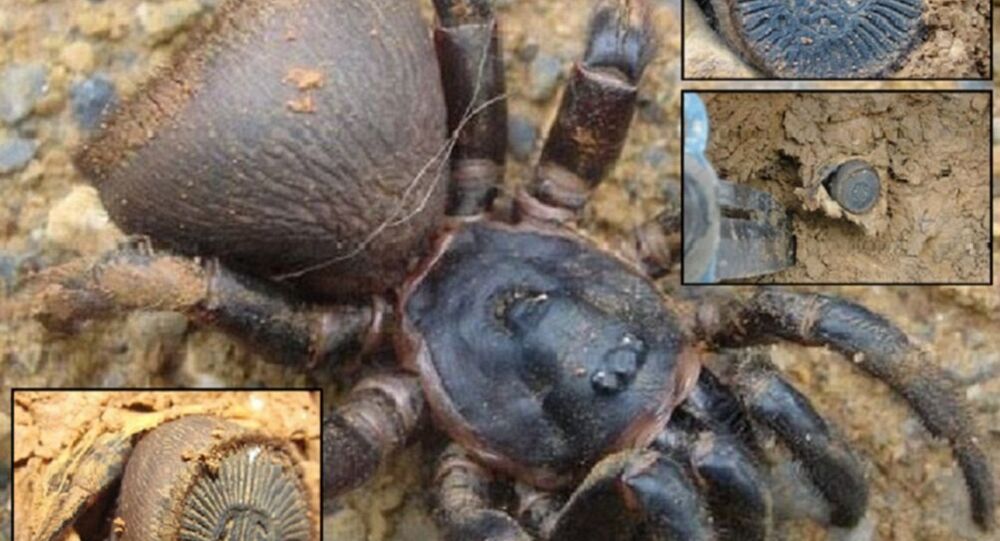 A Chinese farmer working in his garden came across a disk with mysterious signs on it. It appeared to be an ancient seal, but then upon closer inspection he discovered it was a weird spider with a flat patterned abdomen.

An unnamed Chinese farmer was working in his garden in Pujiang county in Sichuan province when he thought he found a valuable ancient seal, but then he noticed it moving and realized it was actually a weird arachnid, the South China Morning Post reported.

The spider had an abruptly truncated abdomen which ended in a weird patterned disk. The name of this genus of arachnids is Cyclocosmia ricketti, “trapdoor spider” or “Chinese hourglass spider”. They are considered to be the most ancient spiders on Earth. Nowadays they inhabit some Southern US states, Thailand and China.

​The Cyclocosmia spider was first identified in Southeast Asia in 1901. Since then, there have only been six sightings of such spiders in the region.

The spiders of this species are quite large, up to 28 mm long, with a disc diameter of 16 mm. They live in burrows in the ground and use their strong flattened abdomen to clog the entrance when they are threatened.

Today the spiders are kept as pets by some people. Since the spiders are rare their prices are high. Lately a Cyclocosmia was sold online in China for 12,000 yuan (~$1,750). The farmer, who has brought the spider home, now intends to sell it “at a good price,” the report says.

Ack! A Spider on the Gas Tank! Kill it!