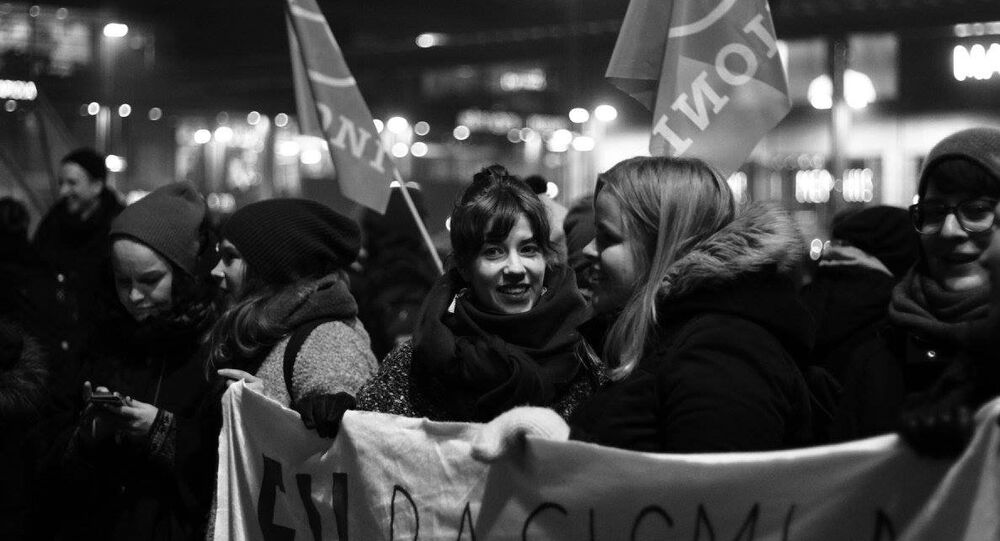 On Saturday, November 12, Finnish feminists HelFem are holding a forum named FemF in the capital city of Helsinki. Part of the curriculum is a sub-forum, where people with white skin are not welcome. Whereas this controversial approach stirred an uproar on social media, the feminists themselves have no qualms about this obvious display of racism.

© AFP 2021 / JONATHAN NACKSTRAND
About-Face: Swedes Begin to Lose Faith in Multiculturalism
The "No Whites Allowed" room is part of the feminist-themed sub-forums for people with a skin color different than white. The room is intended to serve as a "safe zone" where non-whites may enjoy a drink, listen to music, watch documentaries or just relax, Finnish national broadcaster Yle reported.

This provocative, apartheid-reeking initiative caused a sensation in the social media. Subsequently a Facebook announcement about the forum was removed due to numerous complaints by enraged users.

Curiously, HelFem saw nothing disparaging in either the sub-forum name or their approach in general. According to HelFem representatives, the idea was pretty much the opposite: namely, to eliminate racial persecution and hate speech and raise awareness about ethnic minorities through positive discrimination.

​"Mainstream feminism is very white. Sometimes people use feminist messages simply for promoting their own brand," a HelFem representative told Yle, citing the dominating percentage of white women in institutions working against discrimination.

© Flickr / Sara Löwgren
Reverse Discrimination? Blonde Bashers Denigrate Swedes in Their Own Country
In present-day Finland, the white skin color is still the given norm, even in feminist circles. Consequently, people of color are, according to HelFem, forced to be aware that they deviate from the norm, which lends a feeling of insecurity and fearfulness. They argue that this leads to white feminists discussing racism without actually having experienced it. Hence, FemF intends to reverse the tables by giving whites a taste of their own medicine.

Given the fact that Finland remains the most ethnically homogenous and conservative Nordic country immigration-wise, with the share of non-Finns hovering at about 3 percent of the population (compared with Sweden's 17 percent), it is no wonder HelFem's compatriots were not particularly impressed with the idea of using "positive" discrimination to eliminate the "negative" one. Unlike many European nations, Finland has neither had an imperial past nor overseas colonies, which is why the intention to induce a sense of guilt has never struck home.

Among others, Sebastian Tynkkynen, who is chairman of the Finns Party Youth League, reported the "No Whites Allowed" idea for racism.

Remarkably, HelFem dismissed all accusations of "reverse racism." According to the group, organized racism requires structures and institutions, and whereas people of color never have structures on their side, reverse racism simply cannot exist.