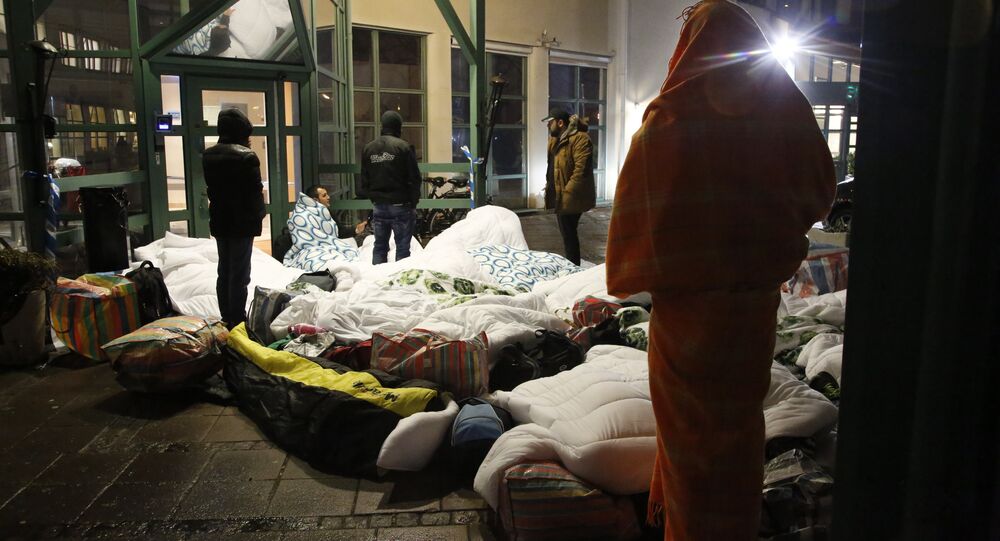 Islamic "morality police" have become more active in vulnerable suburban areas across Sweden, which are in effect ghettoes where real police are hardly welcome. Girls' rights have become heavily restricted when it comes to sporting activities, hanging out with guys or choosing partners, associations working against "honor crimes" stated.

© AP Photo / Santi Palacios
Refugee Women Shut Themselves Away to Avoid Harassment in Sweden
Recently, a report from the Swedish NGO Varken hora eller kuvad ("Neither whore nor subdued") voiced concern about the rise of oppression and so-called honor crimes among young people in Gothenburg's disadvantaged suburbs. The same trend has become manifest in the Stockholm urban area, as powerful forces affecting girls' and women's public and private lives have intensified in recent years, Swedish national broadcaster SVT reported.

Today, girls raised in Muslim families may find themselves in a hard situation.

"A girl is not allowed to have male friends. Also, her friends must be approved by her family. She is only allowed to go to school and then straight home. So she starts a love relationship, which the family quickly finds out about. Then the father plans to marry her off to avoid any disobedience issues. This is very common," Azam Qarai of the women's clinic Linna, which supports young people who have fallen victim to honor-related oppression and violence, told SVT.

"If you visited for example Rinkeby [a troubled Stockholm suburb with 90 percent of the population being of immigrant descent] some 15 years ago, you would have seen girls in hip-hop attire. Now, more extreme currents seem to dominate," Qarai pointed out.

According to Zeliha Dagli, chairwoman for the women-only association of Kibele, a macho culture has developed with a morality police who controls girls' behavior. This control applies to everything from everyday life (how to dress and who to associate with) to vital life choices on education, job and marriage.

"There are lots of attitudes here that did not exist in Sweden before. The clothing must be decent, makeup is not allowed. Girls are being restricted from childhood onwards," Zeliha Dagli said.

It is not uncommon that girls living under relatives' oppression end up as victims of honor crimes, few of which are ever reported to the police, Bernardita Nuñez, director of the women's shelter Terrafem, said.

"It is very difficult to break with one's family. Many of our residents have been married off and have lived with their spouses for several years before they have mustered the strength and courage to escape," Nuñez said.

© AP Photo / Jon Super
Swedish Women Urged to Wear Headscarf - Or Be Raped
Both Nuñez, Dagli and Qarai argued that politicians do too little to address the issue of "morality police." This attitude was shared by Swedish Democracy Minister Alice Bah Kuhnke, SVT reported.

In many cases, honor-related violence and oppression limits the young people's freedom of choice. Those who challenge or defy the norms are considered to bring shame upon the whole family and risk being punished for the family to regain the perceived loss of honor. In most extreme forms, "honor crimes" may be fatal, usually performed by family members, relatives or other members of the community.

About 70,000 people between 16 and 25 years of age in Sweden are estimated to experience limitations when it comes to choosing partners. Above all, girls of foreign origin admit to suffering restrictions. A total of 78.4 percent of the girls in suburban areas believe that their private life is too tightly controlled by their parents, compared with only 16.9 percent among boys. Furthermore, 76.8 percent of the girls may only spend time with the girls, while 93.2 percent of the boys get to socialize with people of both sexes, Varken hora eller kuvad reported, after surveying 1,200 young people in Gothenburg's socially and economically disadvantaged suburbs.