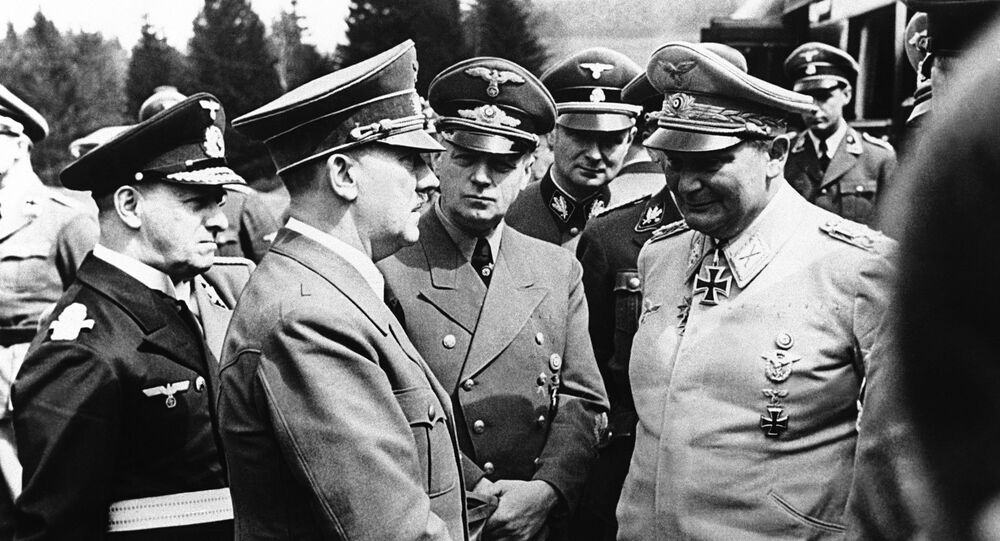 Despite the common stereotype that everything worth mentioning about WWII has already been chewed over, new facts (and "facts") continue to appear. A German novelist claims to have found an alternative explanation for why the Third Reich became what it ultimately became. Nazi machinery, down to the last cog, ran on drugs.

© AP Photo
Austria Announces Destruction of Adolf Hitler’s Birthplace
In his book "Hitler's Addiction," which gained a lot of attention in Germany and was subsequently translated to a number of European languages, 46-year-old Norman Ohler took a closer glance at the drug habits of Nazi leader Adolf Hitler and his compatriots, citing Hitler's personal physician Theo Morell's archives. According to Ohler, Hitler had nothing against a "healthy" medication boost, and nor did his close associates.

Morell, who supplied Hitler drugs from 1941 to 1945, is regarded as Führer's own pusher. Before the collapse of Nazi state, Morell had stuffed his Führer with tons of tablets and stabbed his hands with hundreds of opioid syringes, Ohler told Norwegian newspaper Aftenposten.

​Besides the Nazi leadership, even rank-and-file members of the Third Reich were spoon-fed on hard stimulants such as the methamphetamine Pervitin to expedite the insane campaigns in the West and the East alike. Ironically, the Nazis, who claimed that Germany had become decadent and morally unhealthy, had started out putting drug addicts in concentration camps.

© AFP 2020 / JONATHAN NACKSTRAND
Once Bitten, Twice Shy: Ikea Removes Controversial 'Hitler Boy' Ad
Having lost its colonies as a result of the Treaty of Versailles in 1919, Germany forfeited colonial produce and had to stimulate the population with chemical substances, which ultimately made the country a pharmaceutical superpower. By 1926, Germany topped the list of countries producing morphine and was also a world leader in the export of heroin.

In 1937, the Temmler-Werke plant in Adlershof, Berlin, received a patent for a particularly invigorating new methamphetamine, which was called Pervitin. It was sold in pharmacies without a prescription, and soon became a source of happiness and self-confidence for millions. It was "National-Socialism in tablet form," Ohler said, claiming Pervitin pills were widely used by workers, housewives and soldiers alike. In the spring of 1940, before the Nazi blitzkrieg in Belgium, the Netherlands and France, a party of 35 million tablets that muffled the need for hunger and sleep were ordered by the Nazi Wehrmacht. German Panzer tank crews knew Pervitin as "tank chocolate."

​On the Eastern Front, however, methamphetamines weren't used as widely. Russia's distances and harsh climate proved too overwhelming to arrange for timely shipments. Soon it became clear that the war against the Red Army could not be won with a heap of pills, no matter how potent.

As Nazi Germany fell further into the quagmire, Hitler, a staunch vegetarian and non-smoker, developed a powerful addiction himself.

"From August 1941 to April 1945, Hitler was received almost daily treatments from his personal physician. According to Morell's notes, "patient A" was treated on 885 days out of 1349 during this period. In 1,100 cases, we are talking about medications, whereas nearly 800 injections were mentioned," Ohler told Aftenposten.

​Following the catastrophic defeat in Stalingrad in 1943, Hitler's health started deteriorating at a rapid pace, and his daily cocktail of hormones, steroids and vitamins became clearly insufficient. Consequently, Morell started injecting his Führer with opiates and analgesics.

© Photo : Julia Petrova /Russian Arctic National Park
Dead Snow: Abandoned, Long-Lost Nazi Base Discovered in Arctic
Utterly dejected, Hitler was no longer able to inspire the public at mass meetings. In his early years, direct contact with a jubilant audience gave him a desired energy boost; later on, he had to resort to replacement chemicals, which further increased his isolation.

Morell was relieved from duty in April 1945, only 13 days before Hitler committed suicide, when the Nazi loss became as clear as daylight. At the end of the WWII, he was arrested by the Americans, only to be released and die in a hospital in 1948.

"War without the use of hard drugs is impossible to imagine. Drugs have always been a part of it, and it always will be," Norman Ohler concluded.

Last year, Norman Ohler's book attracted substantial attention in Germany, but was met with contradicting responses. Der Spiegel magazine lauded Ohler's theory as "a well-narrated secondary exposure of well-known facts," albeit "richly flavored with speculation." Die Zeit argued that Ohler's hypothesis could be used to explain or even partly justify the endless evil that Nazism represented.

​Norman Ohler is a 46-year-old journalist and writer living in Berlin, who is known, among other things, for his screenplays, made in collaboration with German filmmaker Wim Wenders and American actor Dennis Hopper.