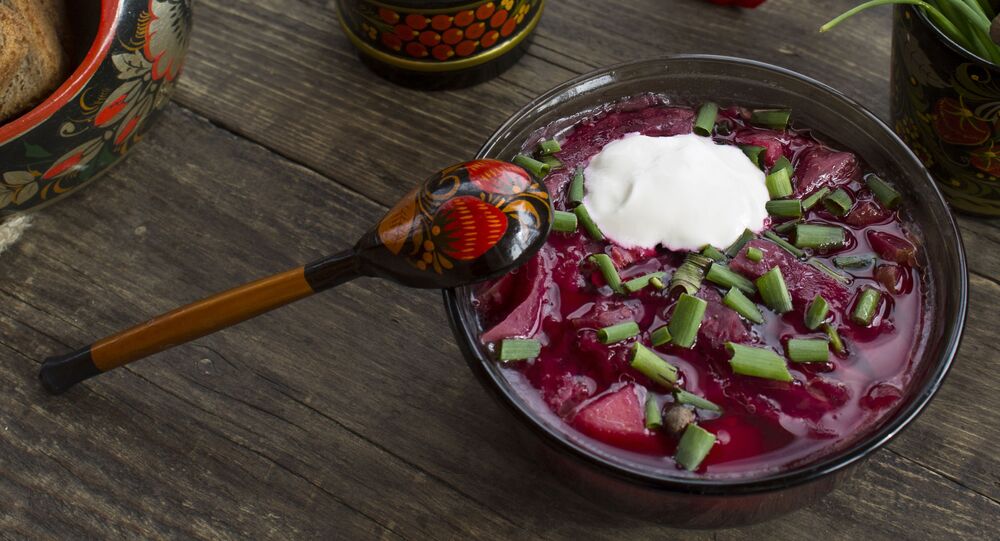 Citizens of Hanoi and many others were introduced to popular Russian dishes during the cuisine week held from September 19 - 25. The event was organized jointly by the Russian Embassy in Vietnam and hotel Deu-Hanoi, where highly skilled chefs including foreign ones work. Sputnik met with the Russian Ambassador and the chef behind the event.

© Sputnik / Valery Titievsky
QUIZ: What Traditional Russian Food Should You Try?
The many guests of the event included representatives of the Vietnamese government, ambassadors of foreign countries, various business organizations, literati and the media.

The chef behind all the Russian dishes was Anton Nosikov, who is also a personal chef to the Russian ambassador.

Speaking at the opening of the event, the Ambassador of Russia to Vietnam, Konstantin Vnukov, noted that Russia is not only politically and economically strong but it also has diverse cultures and ethnic groups, each of which carrying a unique culinary tradition of its own.

In an interview with Sputnik, the ambassador spoke about the idea behind organizing the event “Week of Russian cuisine” in Vietnam.

“During the long period of diplomatic relations between our countries, tens of thousands of Vietnamese studied and worked in the USSR and Russia. They are already familiar with Russian cuisine and love it. When I came here as an ambassador, I regretfully found out that the so-called Russian restaurant dishes are far from perfect.

They do not have Russian chefs, whereas, Russian cuisine requires high professionalism,” Vnukov told Sputnik.

The ambassador further said that a number of factors motivated him to carry out the Russian food week.

“On the one hand there is a very high demand for Russian cuisine in Vietnam. Many Vietnamese who have lived in Russia for many years delightfully remember our cuisine and during each meeting they ask where one can eat real Russian food,” Vnukov said.

He further said that there are no such places in Vietnam where one can get good Russian food. “We will work hard to create highly professional Russian restaurants and cafes here. There is an idea supported by the new leadership of the city of Hanoi to start producing black rye bread here.”

The ambassador also said that on October 5 the free trade agreement between the EAEC and Vietnam will come into force and this agreement will create favorable conditions for Russian high-quality food products to arrive from Russia quickly and at competitive prices.

This food week showed that interest in Russian cuisine in Vietnam is huge. According to the ambassador, since the start of the event on September 19, during every lunch and dinner time in the hall of Café Promenade, where the event took place; there were virtually no vacant seats.

“This is a total success! To Vietnamese and foreign guests of the hotel, we tried to show our wide range of dishes: appetizers, soups and main dishes. For many, it was a discovery that Russian cuisine is not just borsch, which is known by every Vietnamese citizen, kebabs or Stolichniy salad.”

In an interview with the Head Chef, Anton Nosikov, Sputnik found out what was on the menu during the Russian cuisine week.

“Let’s start with the appetizers. We have black caviar [which is produced in Vietnam, on a farm in Dalat], blini [Russian pancakes], an array of classic salads including our Russian ‘New Year Olivye’, herring salad, cold smoked sturgeon and salmon, smoked eel, marinated mushrooms, pickled cucumbers and tomatoes and sour cabbage. All of these were prepared according to traditional home recipes,” Nosikov said.

He further spoke about soups and the main course that was presented during the food week.

“For soups we had okroshka, meat-solyanka and classic Moscow borsch. There were cabbage and meat pies to go with the soups. The main course included Caucasian cuisine, different types of kebabs, lamb chops, as well as Russian fish pie. There were of course, dumplings with meat and fish,” the chef said.

As for desserts, there were different kinds of pancakes with sweet fruit and berry fillings, which grow here in Vietnam. “There was the classic Russian honey cake; called Medovik, and apple cake [every Russian hostess can cook it in under 40 minutes]” Nosikov said.

One of the visitors of the event, Hong Thanh Quang, shared his reviews with Sputnik saying that, “Never before has Russian cuisine been so well represented in Hanoi. Of course, now we have a restaurant with a menu that includes Russian and European cuisine [usually, their owners are people who once studied in the Soviet Union].”

“However, such a wide variety of Russian dishes, such as those presented here during the Week of Russian cuisine, has never been seen before! The quality of cooking in restaurants is not always up to par. Here it’s on another level and everything is very tasty,” Quang said.

Trade Between Vietnam, Russia Increased by 28% in July-January