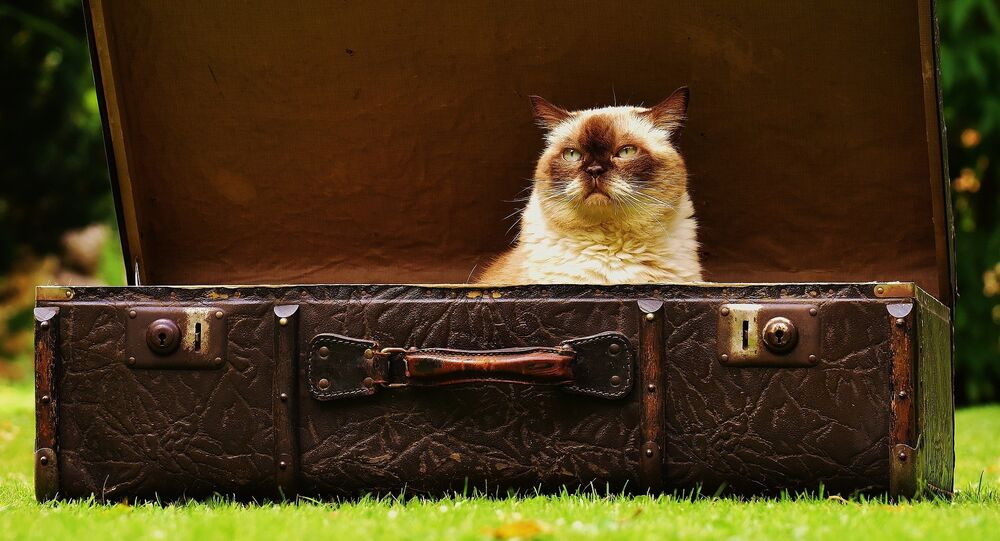 The world's largest genetic study on ancient cats has revealed that the fearless felines conquered the world before the advent of cute internet pics. Our furry friends crossed continents and brought pest control with them. Even the Vikings were found to have taken cats along on their travels.

© Photo : Draken Harald Hårfagre
Transatlantic Saga: Viking Ship Sails Into New York Harbor After Oceanic Voyage
A research team led by Eva-Maria Geigl, an evolutionary geneticist and the Jacques Monod Institute in Paris, analyzed mitochondrial DNA from over 200 cat remains found at more than 30 archeological sites across Europe, the Middle East and Africa. Mitochondrial DNA is only inherited through the maternal line. The samples taken date from the Mesolithic period (15,000 BC) up to the 18th century.

Researchers distinguished two distinct waves of growth of domestic cat populations: the first one occurred around 10,000 years ago when humans first started cultivating crops, and second one happened when mankind took to the seas.

Cats were first approached by mankind around 12,000 years ago amid the dawn of agriculture in the Fertile Crescent. Some 6,000 years ago, cats may have been tamed by Ancient Egyptians — only to be mummified by the millions by later dynasties. The same DNA lineage was later found in ancient cat remains in Bulgaria, Turkey and sub-Saharan Africa from the end of the fourth century BC through the fourth century AD.

© Flickr / Mehmet Pinarci
Back From the Dead: DNA of Deceased to Boost Danish Research
The initial rise in domestic cat populations was based on agricultural progress. Granaries drew hordes of rodents, which subsequently became food for slinky felines. Ancient humans probably welcomed the new arrivals as an effective-yet-lovable means of eradicating mice who were eating away at their crops. A second population explosion seemed to coincide with the advent of boat travel. Again, cats served to protect invaluable victuals from rats and mice that spawned on board. Even Vikings, though infamous for being stern, seaworthy coastal raiders, were not averse to having a kitty on board their longboats, the study showed.

As promised, here is a photo of my cat wearing a viking hat #JJGO #MaxFunDrive pic.twitter.com/3K5jlOgygv

​A cat bone dating back to 200 AD was found in a grave with burnt human remains near Kastrup in southern Jutland, Denmark, which suggests that it was used as a symbolic amulet with protective value.

© Photo : Pixabay
Feline Festival Featuring Cat Videos Comes to London for 'Furrst' Time
It is highly likely that Scandinavians only picked up on the wide popularity of the domestic cat after they had begun coming into contact with other cultures during Viking Age exploration, such as the British Isles, where cats were already widely used for pest control. Subsequently cats made it to Iceland and even across the ocean to Greenland, which was inhabited by Vikings around the year 1000.

During the Viking age, cats were rare, expensive, and connected with Freyja, the Norse goddess of love, who had a carriage driven by a pair of male cats. Another mythological instance of the cat was used as a camouflage to lure hammer-wielding god of thunder Thor, who was asked to lift giant Utgard-Loki's cat, which later turned out to be the dreadful Midgard Serpent in disguise.

Cats Are Possibly the Funniest Pets Ever

Do You Meow Me? Scientists Close to Understanding Cats' 'Language'