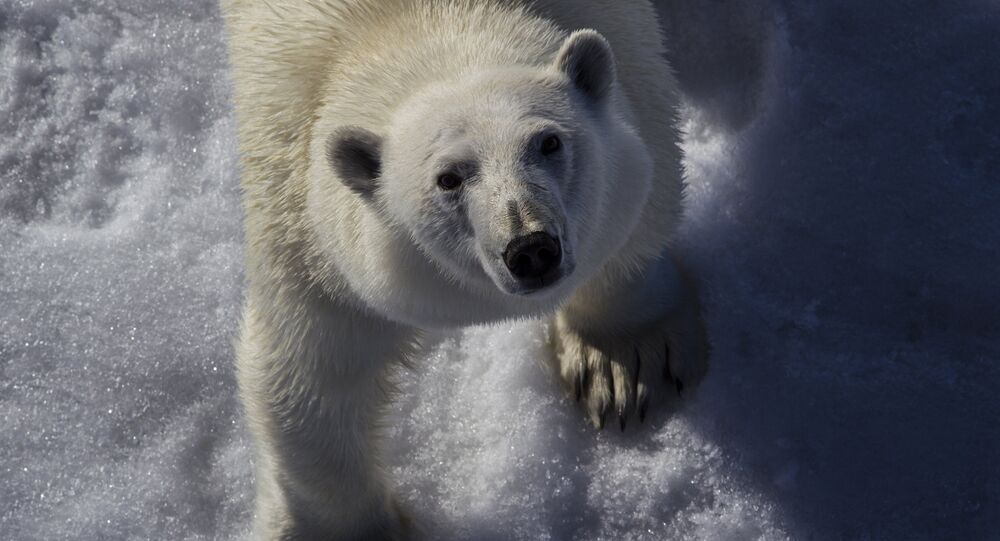 A group of hungry polar bears continue to besiege a team of meteorologists who are currently trapped at a remote Russian weather station near the Arctic Ocean, according to the Russian newspaper Izvestia.

The Izvestiy Tsik weather station is located on Troynoy Island in the southern area of the Kara Sea near the Arctic Ocean.

Station chief Vadim Plotnikov was quoted by Russian media as saying that the polar bears started staking out the weather station late last month after eating one of the scientists' dogs.

© AP Photo / Romas Dabrukas
A polar bear stands on an ice floe near the Norwegian archipelago of Svalbard. File photo

Right now, the five staff have to remain inside the building, because "the female polar bear has actually been spending the night under our window since Saturday and it's dangerous to go outside," according to Plotnikov.

He said that after two bears broke the windows of one of the storage buildings, the scientists had to stop some of their work and that they had already used up all of their supplies for scaring away the bears.

The state research agency Sevgidromet plans to dispatch the ship Mikhail Somov to the Troynoy Island to provide the scientists with dogs and squibs, devices which cause small harmless explosions to prod the bears to leave. However, the ship will only arrive in Troynoy in mid-October.

Russian media quoted Plotnikov as saying that "delivering the squibs from the mainland will require third-party funds, but we need help."

© Photo : Animal Defenders International
Scotland to Become First UK Country to Ban Wild Animals in Circuses
Meanwhile, the station staff have used creative ways to ward off the predators; in particular, the scientists tried to scare the bears by starting a tractor, according to the newspaper Rossiyskaya Gazeta.

It quoted Sevgidromet head Vasily Shevchenko as saying that the polar bears are especially active in the fall and that almost every year they are spotted near the weather stations.

With the ice floes due to be in place in the Kara Sea in late October, the bears will most likely leave the weather station, media reports said.

The polar bear has been placed on endangered species list in Russia and beyond, and hunting them has been prohibited since 1957.

Riddle Me This? People Debate the Nature of Enigmatic Cute Animal