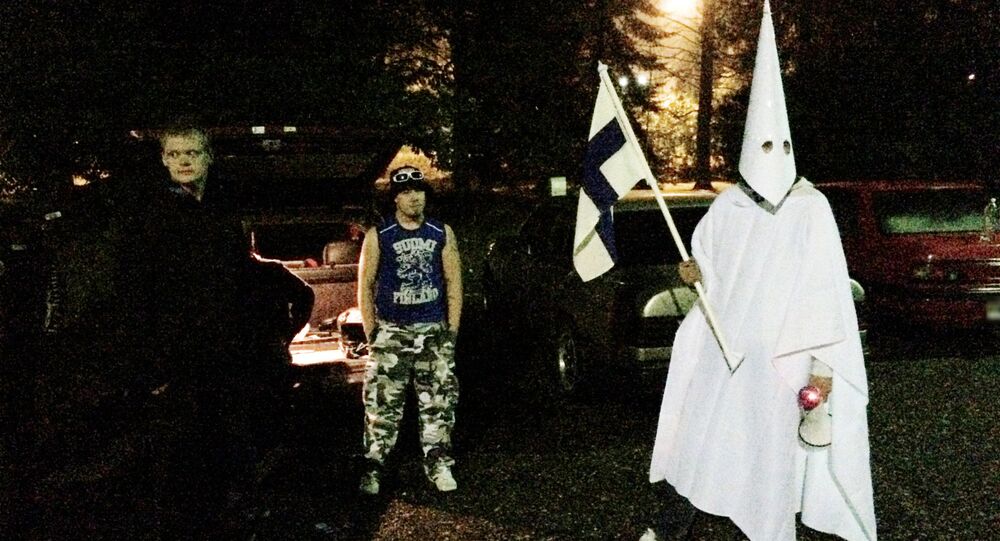 Almost a year ago, an anti-migrant demonstration in Finland's Lahti made international headlines after a protester was photographed sporting a white supremacist Ku Klux Klan robe. Whereas the image went viral across the globe, the prosecution failed to file charges for lack of criminal intent, citing freedom of expression and freedom of speech.

© AP Photo / Kaisa Siren/ Lehtikuva
Finland Hopes to Hold Down the Fort Without Anti-Migrant Agreement With Russia
No criminal charges will be filed against the 19-year-old Finn who appeared dressed up as a Klan member and waved the Finnish flag during an anti-immigrant demonstration outside the Hennala reception center in Lahti, Finnish national broadcaster Yle reported.

The protester was suspected of fraudulent misrepresentation, desecrating the Finnish flag and public incitement to a criminal offense. According to the prosecutor, however, the case did not meet the requirements for filing criminal charges.

During police interrogation, the fortunate Klan fan called his behavior a "stupid momentary stunt." He admitted to attending the demonstration at a friend's suggestion and buying the outfit on the night of the protest.

​The same case involved a 45-year-old Yle reporter, who was there taking photographs and was suspected of instigating the white-clad Lahti resident to display the national flag seen in photograph that later became infamous. Since no evidence of such instigation or desecration of the flag was found, the charges against the reporter were dropped as well.

The anti-immigration demonstration that took place outside the Hennala reception center in Lahti in September 2015 was hardly a single isolated incident. With the migrant crisis reaching its peak last autumn, numerous anti-migrant demonstrations were held across Finland. The anti-immigrant sentiment was exacerbated by a high number of high-profile gang rape cases involving immigrants. The widely-covered rape cases subsequently became a fertile ground for Finnish nationalists.

The public resentment resulted in the appearance of a vigilante group named the Soldiers of Odin (SOO), who on their Facebook page blame "Islamist intruders" for "uncertainty, lack of safety and the surge of crime in Finland." The nationalist movement, which later spread to Finland's neighboring countries with the exception of Russia, started street patrols in a number of Nordic cities to allegedly protect people, especially women, from criminal immigrants, but also "to help everyone regardless of their ethnic background."

​A number of Nordic media later alleged that racism and Nazi sympathizers were rampant among the SOO rank and file, yet no substantial proof has been provided. The group claims to have several hundred members in more than 25 cells across Finland, Sweden, Norway, Poland, Belgium, Netherlands, Germany, Estonia, Hungary — as well as in Britain, Ireland, Canada, and the United States.