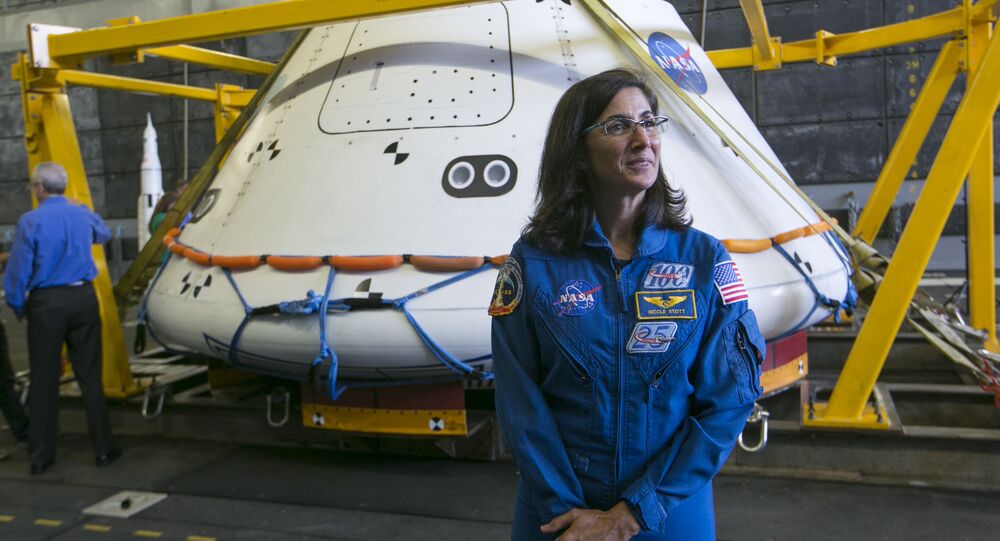 Russian children fighting cancer together with NASA astronaut Nicole Stott and director of the Arts in Medicine Program at the University of Texas MD Anderson Cancer Center Ian Cion are painting pieces for a real NASA space suit at a two-day event in Moscow.

© AP Photo / Chris O'Meara
NASA Astronaut to Hold Art Therapy Master Class for Cancer Patients in Moscow
MOSCOW (Sputnik) — The event, organized by the Rainbow Art Studio of Eurasian Cancer Foundation (EACF) and the Museum of Cosmonautics in Moscow, is part of the US Space Suit Art Project aimed at creating a replica full-sized NASA space suit from the pieces hand-painted by the young patients from around the world. The suit will incorporate over a thousand art pieces.

The patients of the Federal Research Center of Pediatric Hematology, Oncology and Immunology named after Dmitry Rogachev have painted some forty pieces for the suit with Stott, Cion and Russian cosmonaut Fyodor Yurchikhin, on the first day of the event on Monday.

“That was outstanding, so well-done,” Stott told Sputnik. “We had everything from the Russian flag to strawberries or flowers, to the sun and just abstract kind of paintings, as well as some things that when you look at them you would say that a young Russian person painted that. Some kind of traditional designs that you would associate with Russia.”

On Tuesday, the patients of the EACF and Podari Zhizn Foundation (Gift of Life) and their families, as well as doctors, nurses, psychologists, and Russian cosmonauts Oleg Artemyev and Yuri Gidzenko continue painting the art pieces for the NASA suit at the at the Museum of Cosmonautics.

“It’s so impressive to see how the children that are participating are just light up. It’s just like that get strength form working with the art and knowing that they are part of this project is bigger than their one piece,” Stott noted.

Prior to the visit to Russia, Stott and Cion painted with the cancer patients in the United States and Germany. Their next stop will be in Tokyo.

“We are coming to Russia, Germany, Tokyo, and ultimately to Montreal as well as other International Space Station (ISS) headquarter cities to paint with children that are in the local cancer treatment centers, and hopefully paint with local cosmonauts or astronauts to collect their artwork to then build an international version of a space suit that we are calling Unity,” Stott said.

The Space Suit Art Project was launched by Stott and Cion to demonstrate the benefits of arts and science to adults and children fighting cancer. The patients are tasked with hand-painting fabric patterns, which then get stitched together into wearable replica spacesuits at ILC Dover space suit manufacturer.

“Each child paints something very special to them, and it’s beautiful on its own but when you look at the suit and all those pieces together it just becomes a beautiful statement of unity, of hope, and of courage,” Stott said.

© Sputnik / Sergey Guneev
Russian Scientists Use Nuclear Reactor to Fight Cancer
Stott reminded that two spacesuits, named Hope, and Courage, have already been produced by the children, doctors, and nurses at the MD Anderson, and Courage is currently on board the space station.

The Unity suit will be created from the pieces crated by little patients form around the world, including from Russia, to represent cancer issues, spread awareness and give hope to cancer patients across the globe. The goal of the Unity suit project is to show that a victory over a severe illness as well as a space flight is a difficult physical and emotional test that can be accomplished only by working in a team.

Stott said that they hope to finish the Unity suit by January.

EACF is a new Russia-based foundation looking at ways to prevent, detect and treat cancer.

A UK survey published in 2013, reported that 92% of adults with cancer who had used art therapy found it helpful.

Millions of US Citizens Use Potentially Cancer-Causing Tapwater