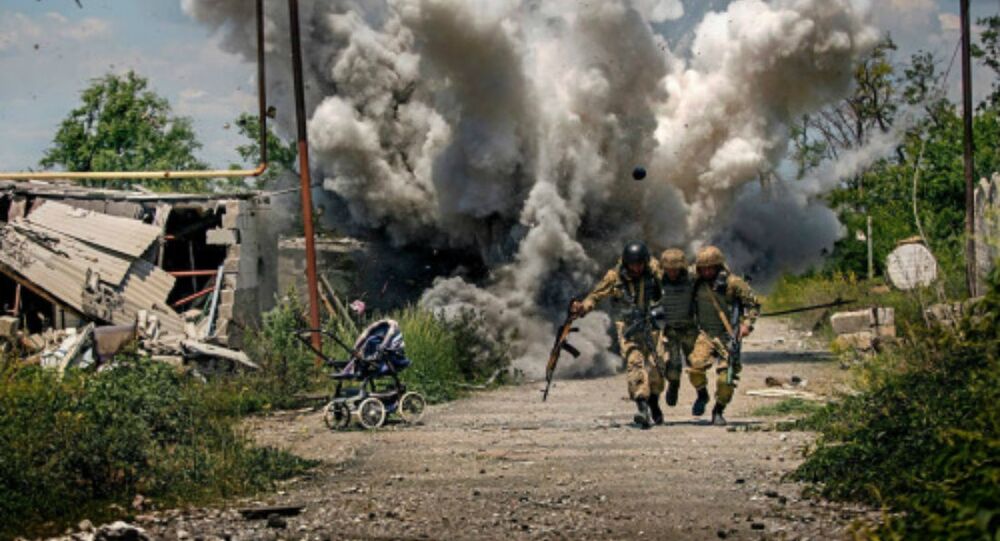 Spoiled By Photoshop: How Photographers Fool the World With Their Fake Shots

On Sunday, the Ukrainian Defense Minister “dismissed from all duties” Dmitry Muravsky, an amateur photographer and advisor to its press department, after the authenticity of a photo he claimed to have taken in the country's war-torn east was “called into question.” Have a look at some other cases of photo cheating compiled by the Russian media.

Twitter: @RFERL
‘Ukraine Invents War That’s Not There’: Local Reporters Claim War Photo Staged
The “photo in question” which depicts two Ukrainian soldiers carrying another, presumably injured, as a bomb or mine explodes in the background, has sparked outrage in Ukraine.

Among the reasons to believe that the photo has been staged is the density of the smoke and close proximity of the running soldiers to the site of the blast.

Such explosion, experts believe, would have killed all three of them.

Russia’s online newspaper Lenta.ru has examined some other prominent cases of fake photos.

The Dark Heart of Belgium

His story, titled ‘La Ville Noir — The Dark Heart of Europe’ claimed to depict the true dark side and social problems of the Belgian city of Charleroi.

However shortly afterwards Troilo was stripped of his award after the mayor of Charleroi, angered with what he has seen, accused the photographer of staging the photos.

Troilo was forced to admit that some of his images were taken of models, staged to recreate issues or scenes which “typify Charleroi” and were taken in Molenbeek, Brussels.

Back in 2013, the image of then-Iranian President Mahmoud Ahmadinejad sparked a storm of controversy in the Iranian press after his performance at the funeral of Venezuelan President Hugo Chavez.

​The Iranian leader came cheek to cheek in a consoling hug with a grieving Elena Frias, the mother of the late president, while clasping her hands.

However according to strict Islamic laws, Muslims are not supposed to touch others of the opposite gender unless they are related or married.

In response, some supporters of Ahmadinejad, including a cleric who was part of his entourage at the funeral and witnessed the interaction, insisted that the photograph of the president apparently hugging Elena Frías, was a forgery, created by digital manipulation.

Others circulated online what they said was the image before it was altered in Photoshop, showing the Iranian leader in the same embrace with an older man.

In the same 2013, South Korea’s largest news agency distinguished itself while reporting on the joint news conference of the country’s President Park Geun-hye with Barack Obama.

It released the photo of the two leaders shaking hands after the event. The photo’s caption read, “South Korean President Park Geun-hye (L) shakes hands with US President Barack Obama at a White House meeting on May 7.”

​The photo would have looked fine except for maybe the extra hands. And the fact that Park and Obama were in different rooms.

Later Gizmodo posted an actual photo of Park and Obama shaking hands and jokingly suggested that someone’s child might have gotten “loose in Yonhap’s office right before press.”

Back in 2008, Iranian news website Sepah News released a photo of the launch of four Iranian missiles, republished by Agence France-Presse (AFP).

The photo ran on the covers of major media outlets around the world before anyone noticed the apparent error.

The experts however were quick to identify that it was a fake shot.

The Associated Press later released an identical-looking photo, except instead of a fourth missile, there was a military vehicle on the ground with a missile on its back ready to fire.

In a statement, AFP said that the missile "has apparently been added in digital retouch to cover a grounded missile that may have failed during the test."

Back in 2006, Reuters dropped a Lebanese freelance photographer after it emerged that he had “doctored” a picture of the aftermath of an Israeli air strike on Beirut.

It showed thick black smoke rising above buildings in the Lebanese capital.

​However some news bloggers claimed that it had been manipulated using Photoshop software to show more smoke.

"The photographer has denied deliberately attempting to manipulate the image, saying that he was trying to remove dust marks and that he made mistakes due to the bad lighting conditions he was working under," Moira Whittle, the head of public relations for Reuters then said.

Combining Two into One

Back in 2003, a US war photographer was sacked for altering the image of a British soldier.

Battlefront photographer with The Los Angeles Time, Brian Walski then released a photograph which showed a British soldier telling Iraqi civilians to take cover from Iraqi fire. The photo appeared on the front page of the newspaper.

​However it was noticed that a number of the Iraqi civilians in the background of the picture appeared twice.

The photographer later admitted that he had used his computer to combine elements of two photographs, taken moments apart, in order to “improve the composition.”

In 1994, former football star O.J. Simpson was charged with the murder of his ex-wife and her friend.

Time magazine decided to use his mug shot on its June 27 cover, but first darkened the photo and reduced the size of his prisoner ID number.

​The magazine’s managing editor James Gaines offered his explanation: “the harshness of the mug shot – the merciless bright light, the stubble on Simpson’s face, the cold specificity of the picture – had been subtly smoothed and shaped into an icon of tragedy. The expression on his face was not merely blank now; it was bottomless.”

However many people responded to the cover charging Time with racism and saying that by darkening Simpson’s features it emphasized his skin color and gave him a more “menacing” appearance.