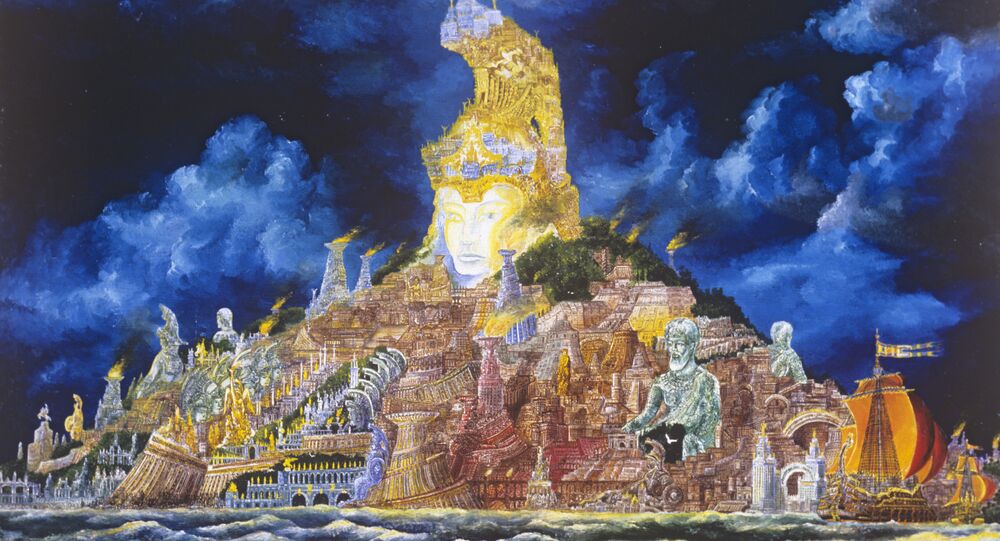 A journalist from the Italian newspaper La Repubblica says he has solved the mystery of Atlantis, a mythical island described by ancient and Renaissance writers.

© REUTERS / Emiliano Grillotti
Italy Quake: 'Migrants Who Have Nothing Help Europeans in Need'
A journalist in Italy believes he has solved the mystery of Atlantis, an island that was first mentioned by ancient Greek philosopher Plato in the fourth century BC.

Sergio Frau, author of "The Pillars of Hercules," believes that the legend of the "lost" island has its basis in reality, and that the key to finding the real island behind the myth lies in locating the pillars described by Plato.

Frau told Sputnik Italia that while the Pillars of Hercules are commonly believed to refer to what is now known as the Strait of Gibraltar, they are actually located in the Strait of Sicily. He says the island referred to by Plato is in fact Sardinia.

"Plato was talking about the island of Atlas, where the rise of Greek civilization took place. Atlas had a brother, Prometheus, who lived (chained to a rock) in the Caucasus Mountains, so there was one brother who lived in the mountains at sunrise and one who lived at sunset in the middle of the sea," Frau explained.

© Photo : fornita da Sergio Frau
A dish from the sixth century BC depicting Prometheus and his brother Atlas
"According to Plato's dialogues, the first thing we see at the entrance to the Strait of Sicily is Sardinia. Plato said that 'the first thing on the other side of the Pillars of Hercules is a huge island, from which you can get to the other islands.'"

Plato wrote the dialogue Timaeus around 360 BC. In it, he referred to "a mighty power… [which] came forth out of the Atlantic Ocean" from "an island situated in front of the straits which are by you called the Pillars of Heracles (or Hercules)."

The island was "larger than Libya and Asia put together," the philosopher wrote.

Frau said that he has used drones to explore Sardinia, and found evidence which corroborates Plato's description of the island.

"Confirming this theory is very important to me. According to Plato, Zeus (Greek god of the sky) wanted to punish the arrogant inhabitants of the island, and sent them a great flood. Homer described the punishment of Phaeacians by Poseidon, who sent a tsunami and thus buried the city 'under a huge mountain because they accompanied Odysseus to Ithaca.'"

© Flickr / Bernard DUPONT
New Theory Claims to Crack Mystery Behind Vanished Ancient Mayan Civilization
"I started studying Sardinia in a different way, and I noticed that on the coast where there could have been a tsunami, there were a lot of Nuraghe (ancient monuments distinctive to Sardinia), which were buried."

"Ettore Tronci and I have been working on this (research) for three years, using drones. Tronci found hundreds of buried Nuraghe in the province of Medio Campidano, discovering this catastrophe for the first time," Frau revealed.

© Photo : fornita da Sergio Frau
A view of Sardinian nuraghe
The researcher said that his theory has gained the attention of the United Nations Educational, Scientific and Cultural Organization (UNESCO), and the Italian Academy of Sciences.

He called for more archaeological research in Sardinia, and for the authorities to better protect the island's heritage.

"We have to understand how this happened, how a once flourishing island suddenly came to be abandoned and only Nuraghe remained," Frau said.

Frau's theory is one of several concerning the possible location of Atlantis. According to German researcher Michael Hubner, the land described by Plato is located in modern Morocco, south of Casablanca. Others believe Plato was describing the island of Santorini in the Aegean Sea, where a volcano erupted and destroyed the Minoan civilization around 1,500 BC.

Russian Emergencies Ministry to Provide Italy With Assistance Amid Earthquake