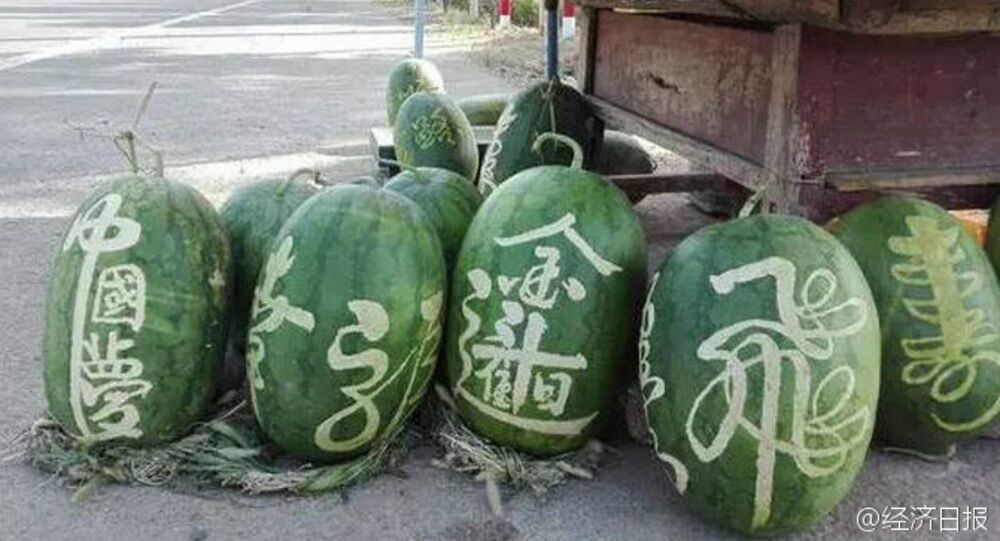 'Lucky' Chinese Watermelons Flying Off the Shelves After Stroke of Inspiration

A crafty Chinese farmer appealed to ancient traditions in order to boost his watermelon sales.

Having realized that his melons and watermelons don't sell well, Gu Xinliang, a 56-year-old farmer from the Chinese province of Henan, came up with an interesting marketing solution that combines the art of calligraphy and ancient customs.

Using his hands only, the enterprising farmer carved hieroglyph 'Fu' (luck) on one watermelon and hieroglyph 'Shou' (longevity) on another; and as both fruits sold in less than an hour after they were put on display, Gu started carving the auspicious characters on the rest of his produce.

As a result, over the course of the following 11 days, Gu managed to sells a total of 3 tonnes worth of his 'auspicious' watermelons along with about a tonne of ‘unsigned’ muskmelons.

And while originally it took the farmer nearly half an hour to carve a single character, it now takes him about 10 minutes to complete this task.

He now even carves custom characters per customers’ requests, but still insists on using only his hands, afraid that tools might damage the merchandise.

Watermelon Gets Turned Into Game of Thrones Arch Villain

Chinese Woman Aims to Pilot Plane Around the World