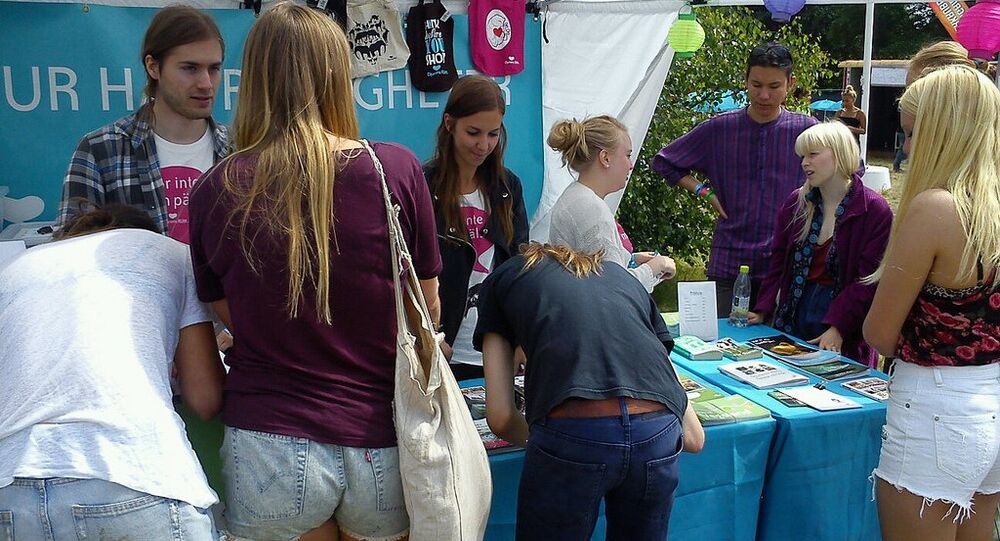 In Sweden, summer is the season for traditional open-air festivals, which gather large crowds. This year, the period of festivities has been marred by a never-ending sequence of incidents involving the abuse of women, which the police have been unable to stop.

© AFP 2021 / JOHN THYS
Off With the Bras! Sweden Legalizes Public Nudity for Humanitarian Reasons
Both the police and the organizers have invested heavily in making this year's festivals safer through increased security. Despite their joint efforts, the number of cases involving sexual abuse has skyrocketed. In addition to the registered rape cases, the police have been receiving an unusual number of complaints of sexual harassment.

At present, up to 40 cases of offensive sexual behavior, which occurred during the Putte i Parken festival in the city of Karlstad alone, are being investigated by the police. Young girls were felt up and harassed; the youngest girl victim was only twelve years old. Last Friday, two underage asylum seekers were arrested for sexually abusive behavior against young girls, only to be later released and handed over to staff at the institution where they live, the Norwegian newspaper Verdens Gang reported.

At the same time, the police have received five reports of rape and a number of cases of sexual molestation during the Bråvalla festival outside Norrköping. The police were again forced to acknowledge defeat.

"Many of the rapes have occurred under circumstances and in places where we do not have access to and have therefore been difficult to prevent," police spokesperson Thomas Agnevik told Swedish Radio.

© Sputnik / Konstantin Chalabov
Forced Marriage Provides Tough Problem for Swedish Judges
Ironically, before the festival season, the Swedish police specifically launched a national campaign to address sexual attacks against women. To combat harassment, bracelets signed "Don't paw me" are being handed out to girls by police officers in connection to summers festivals and other major events frequented by young people.

"The police are taking the reports of sexual molestation seriously, especially when it happens to young people," Dan Eliasson, the head of the country's national police force said in an official press release.

Swedish songwriter and singer Pernilla Andersson lashed out against the current lack of security, in which women now run the constant risk of being sexually molested or raped at public festivals.

​"I've been touring for almost 20 years, first as a musician, then as an artist. I have shared a tour bus with only men, played with men, hung around at many festivals, been in many crowded clubs, sometimes wearing a short skirt. Never have I been involved in any form of abuse. Never have I thought about that I should have no other clothing than just the ones I wanted. Never have I been afraid," Andersson wrote in her blog.

In May, the Swedish police published a report on sex-related crimes in public swimming pools and other public places. Surprisingly for the Swedish media, which has been busy whitewashing the immigration to the country as largely beneficial, the perpetrators in the majority of cases were identified as male asylum seekers. Local media, however, have proven too cowardly to take on the mostly-Muslim migrants and their politically correct apologists, and commonly attribute the sexual attacks on "Nordic alcohol culture," a clear case of blaming the victim.

© AP Photo / David Keyton
Nordic Love of Aquavit Framed for Migrants' Sexual Molestation of Minors
In Sweden, in is otherwise considered appropriate for official statistics to obscure the criminals' ethnic and religious background. According to house rules among Swedish law enforcement organs as well as the mainstream Swedish media, stressing a person's ethnic origin or nationality should be avoided and considered irrelevant to the case, which leads to all criminals being labeled as "Swedes" regardless of their origin.

Sweden's over-lenient immigration policy has together with the failure to properly integrate the migrants led to a surge of ethnic crime in numerous ghettos, which have been mushrooming around metropolitan areas.