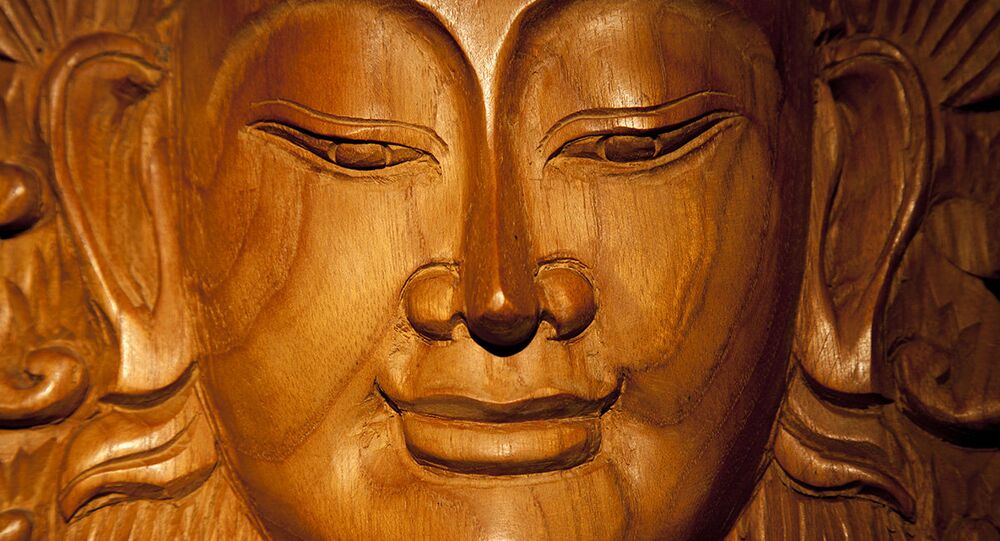 Relics: Section of Buddha’s Skull Said to Have Been Recovered in China

State-sponsored Chinese researchers claim to have found human remains belonging to the Indian ascetic and sage Siddhārtha Gautama, also known as the Buddha, whose teaching is the wellspring of the world religion of Buddhism.

© AFP 2021 / Ed Jones
Dalai Lama Approved: Russia Launching Global Buddhist Messenger for 500Mln People
Presumed to be a portion of the body of the founder of Buddhism, the remains consist of a parietal bone from a skull recovered, along with the remains of other monks, in Nanjing, China, according to a report in the Chinese Cultural Relics journal. The discovery was made during a 2007-2010 crypt excavation under the ancient Grand Bao’en Temple.

In its new writings, the Chinese cultural media outlet stated that the parietal bone was found inside a golden casket that had, in turn, been placed inside a silver casket. The arrangement of caskets was said to have been stored in a larger case modeled on the design of a stupa, a structure that normally serves as a reliquary or meditation chamber.

A skull bone that may have belonged to the Buddha discovered inside model stupa in China https://t.co/ryQxQx3VdL pic.twitter.com/o8gJ4FFZX2

​The four-foot by foot-and-a-half stupa-shaped sandalwood box, as well as the silver and gold caskets, are reportedly decorated with engraved images of birds and gemstones, including agate and lapis lazuli. Researchers said the stupa-shaped container had been placed inside a metal box hidden in a stone chest.

The chest is said to be engraved with writings claimed to be around a thousand years old, by an author named Deming, detailing how a portion of the Buddha’s skull made its way to China.

Presenting himself as "the Master of Perfect Enlightenment, Abbot of Chengtian Monastery [and] the Holder of the Purple Robe,” Deming wrote that the Indian emperor Ashoka (268 –232 BC reign) ruled for the conservation of the Buddha’s body parts, following the latter’s entry to parinirvana, or death.

The remains of the Buddha’s cremated body were split into a “total of 84,000 shares," of which 19 were sent to China, according to Deming.

© AFP 2021 / Kyle Knight
Happy Buddha-sday: Nepal Marks 2,560th Birth Anniversary of Lord Buddha
The new Chinese report suggests that, some time during the seventh century AD, the Nanjing temple in which the skull segment was kept was destroyed during a war, causing the relics to be forgotten. "In this time of turbulence, did no one care for Buddhist affairs?" the inscription rhetorically questions.

However, some five hundred years later, Chinese Emperor Zhenzong ordered the temple to be rebuilt and for any remains to be reburied. In 1011, during a "most solemn and elaborate burial ceremony," the relics were reinterred in a crypt under the temple.

Researchers do not specifically claim to have proof that the engraved story is true.

The story, however, became a sensation in China. When the skull section was displayed in Macau in 2012, over 140,000 “Buddhist devotees” came to see the relic, according to Xinhua.