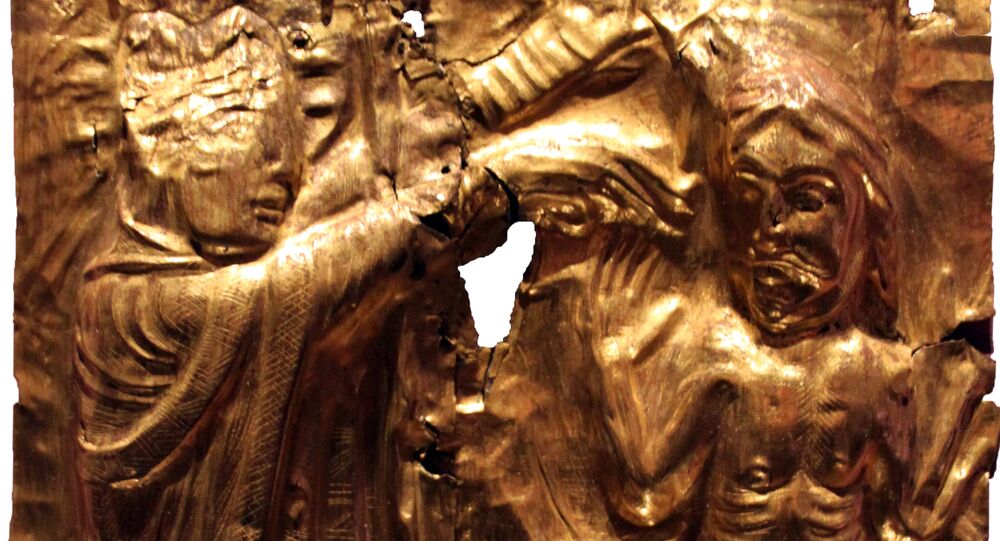 Danish police have reportedly been alarmed over a 1,000-year-old case, as archeologists discovered "clear evidence" that a Viking castle was deliberately set on fire.

© Photo : Youtube/ Draken Harald Hårfagre
Ship Ahoy! Modern Vikings Set Sail for US in World's Largest Longship
The excavation of the Viking fortress Vallø Borgring outside the Danish city of Køge has revealed that the settlement was in fact deliberately destroyed by arson. Following this revelation, archeologists requested help from Danish police.

"Hopefully, they can say more about how the fire was started. We generally have good experience of cooperation with the police. For instance, we have previously used their sniffing dogs to dig out bones from the earth," Sanne Jakobsen, communications manager at Southeast Museum Denmark told Danish Radio.

"All signs indicate that a fire was set at the gates of the castle. The outer posts of the East Gate are clearly charred, whereas the inside is burned," archaeologist Jens Ulriksen, who is in charge of the excavation of Viking fortress outside Køge, told Danish Radio.

© Flickr / Kat
Fighting Bugs With Bugs: Denmark Deploys ‘Organic' Drones Against Pests
The fortress is currently ascribed to Harald Bluetooth, who was King of Danes in the late 900s. According to Danish historian Saxo Grammaticus, Bluetooth was a notoriously harsh ruler, whose cruelty stirred unrest among his people and the army and led to him being killed in a riot.

"Our theory is right now that the country's nobility attacked the castle and set fire to the gates," Ulriksen surmised. The Vallø castle is also believed to be Bluetooth's last before his death, as it only was built halfway and never finished.

Harald Bluetooth ruled Denmark for three decades at the end of the 10th century. He became known for professing Christianity and erecting strategic ring forts across his realm that stretched across present-day Denmark, southern Sweden, as well as seaside Norway, Germany and Poland. At 145 meters in diameter, the Vallø ring fortress is the third largest of the five found in Denmark.

​To establish the truth about the thousand-year old arson, archaeologists have contacted the police to get assistance from a fire investigator. Further hypotheses on the construction and the fall of Vallø will be made after dendrochronology or tree-ring dating on the posts.

New Viking Ring Fortress found in #Denmark, 5th & the first to be found since the 60s! http://t.co/zyxra7WY7K pic.twitter.com/3Nj26aVw2Y