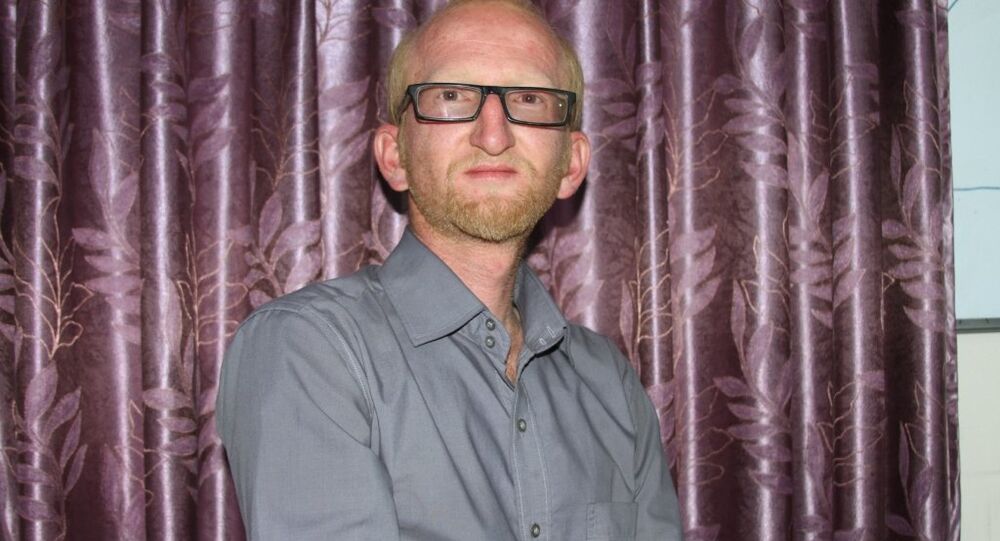 Gholamreza Majidi is not your average Afghan. He stands out due to his atypical looks which are not ordinary for a native of a Middle Eastern country. His skin is white not “green,” as they say in Afghanistan. He has blonde hair and blue eyes. Sputnik spoke to Gholamreza about his life in Kabul.

“Yes, I am often mistaken for a German. Those who were around during the presence of USSR forces believe I am a Soviet. They call me ‘shuravi’ (Soviet translated from Dari). Some people call me English and some think I am from another European city,” Gholamreza said.

His family moved often from country to country. Now his relatives are living in the Afghan city of Sarpol and 30 years ago they lived in Iran, where Gholamreza was born.

He returned to Afghanistan six years ago and now lives and works in one of the firms in Kabul. But he feels lonely in his hometown.

“There were times when people threw stones and shouted obscenities at me. I was forced to run. What can I do, I can’t enter into a dispute with bullies, explaining my nationality to them,” Gholamreza told Sputnik.

He further said that he is forced to carry his ID and passport with him at all times. Police check his papers everywhere he goes and look at him strangely because of his extra ordinary looks.

A curious incident took place last year when Gholamreza went on a trip to the north of Kabul with his friends. On the road the car was stopped at a checkpoint by law enforcement officials. They looked inside the car and saw Gholamreza.

One of his friends decided to pull a joke and without thinking said that Gholamreza was a foreigner and did not have his passport on him. The joke wasn’t funny anymore when the police assumed the friend was serious and took Gholamreza to the nearest police station.

Unfortunately, he actually did not have his passport on him and the police demanded Gholamreza to pay a fine of 5,000 Afghanis ($5,000) in exchange for his freedom.

However, after some bargaining they made a deal, eventually settling at 1,500 Afghanis. Ironically, the police did not realize that it could have been hardly possible for a foreigner to bargain in such a critical situation.

On a more serious note, Gholamreza has been accused of being a spy on a number of occasions. During religious festivals his appearance in or near a mosque always results in many questions from other people.

“Once I managed to break into the mosque. However, before I started reading namaz (prayers) people immediately started making videos and taking pictures with me. Then these guys uploaded photos to Facebook with comments ‘foreigner has converted to Islam and now prays in the mosque side by side with us,’” Gholamreza said.

He recalls the good times back in Iran. According to him being a blonde there was a matter of appreciation. “It gave me signs of attention. Especially from local women, for who light hair color is a sign of a male’s attractiveness. It was easy to acquire new friends there. Here in Afghanistan, my historical homeland, hard times have come my way,” Gholamreza said.

His looks are a disadvantage and even a danger for him in Kabul. “Unfortunately, today in Afghanistan to look European is to expose oneself to discomfort and even danger, to become the object of terrorists or kidnappers,” he said with a sigh and a sad smile.