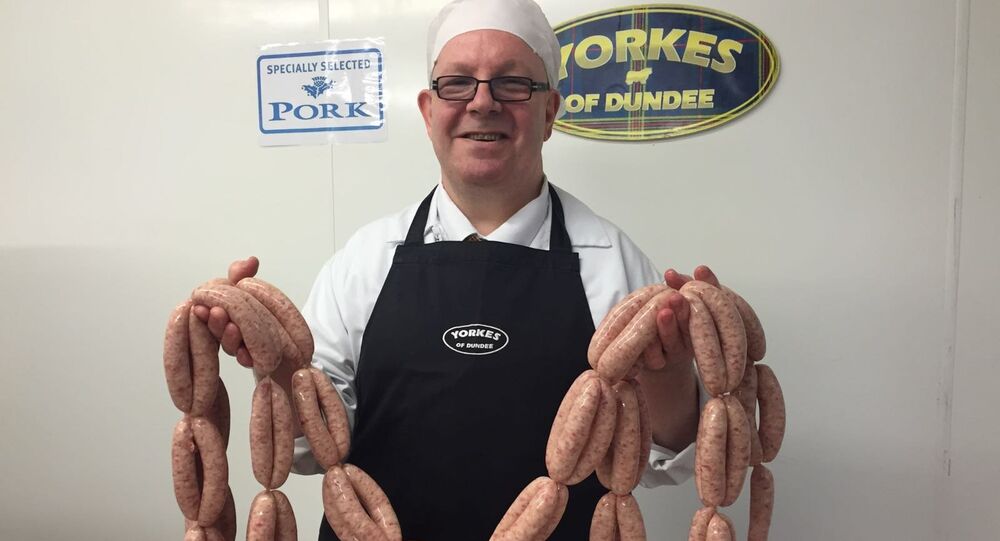 The Battle of the Bangers: World Record Breaking Sausage Attempt

On Saturday two Scottish butchers will battle it out to see who has the fastest sausage making skills. Sputnik went along to find out more about one of the contestant's preparations for the big event.

The Guinness World Record breaking challenge, set up by Quality Meat Scotland, will see David Patterson from Yorke's of Dundee and Steven Cusack from Davidson's Butchers in Inverurie battle it out to earn the title of World's Fastest Sausage Maker at this year's Taste of Grampian Festival.

How does one prepare for setting a #WorldRecord in fastest #sausage making? pic.twitter.com/sQ319ZFp95

David Patterson has been working on his craft for 30 years, but like most young apprentices, sausage linking was one of the first things he learnt on the job. He does however have his own preferred technique.

What does it take to become a world record breaking sausage maker? We visited @yorkesofdundee to find out. pic.twitter.com/JIizLKACnZ

Douglas Scott, Chief Executive of the Scottish Craft Butchers, told Sputnik News that he hopes the event may highlight the importance of craft butchers:

"Just like every sort of craft, machines come along and they do the job for you — it's quite important that this craft is continued and that people can hand link and make sausages in an artisan way as there's still demand for that kind of product."

© Sputnik
David Patterson making sausages at Yorkes in the Hilltown.

And while David, a seasoned pro, made the whole process look simple, just one small split in the sheep intestine outer and the entire attempt could be blown.

This is what happens when the sausage links burst pic.twitter.com/KEXq8Gmse9

According to Mr Scott "it's a relatively easy thing to do, and once you get plenty practice you can quite quickly become very proficient in linking sausages, and can get up to quite a speed."

Though in fear that his competitor may be watching ahead of tomorrow's big event, David didn't quite want to show off his full speed pace.

Is this as fast as you can go? pic.twitter.com/f7rAHWReYb

Both butchers taking part are members of the Scotch Butchers Club, the network of around 300 butcher retailers who support the Scotch Beef, Scotch Lamb and Specially Selected Pork brands.

Who knows what's next for the competitive-butchering world, but both competitors will be hoping to become global leaders in the skill of sausage making at tomorrow's event. As Mr Scott said, it's not just about setting a record, "it's an excellent event to highlight the skills of a craft butcher".