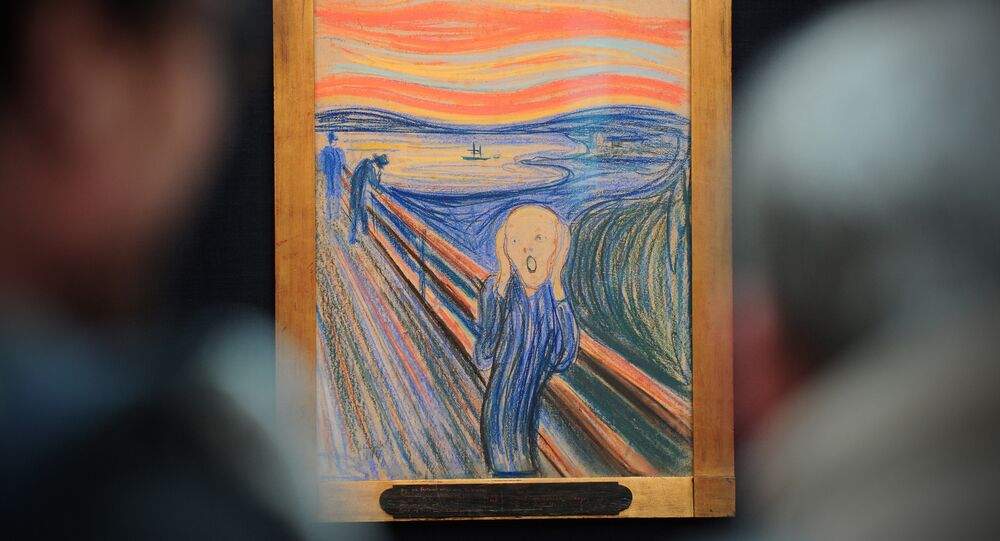 What a Scream! Norwegian Masterpiece Gets Tested for Guano

"The Scream," Edvard Munch's opus magnum, is perhaps Norway's most famous painting. However, the controversial white stain on the Expressionist masterpiece has been a mystery for over a century and still remains the center of hot debate. Today, scientists are eager to answer the question with the help of advanced technology.

© Flickr / Jonathan Urch
The Devil Is Alive: Four Out of Ten Norwegians Believe in the Dark Lord
Numerous experts have discussed the nature of the stain for decades. Now, a unique X-ray machine is ready to give us the answer.

"Some actually believe it is bird droppings, whereas others think it may be stearin or even a meaningful spot left on purpose by the author," Tine Frøysaker, professor at the University of Oslo, told Norwegian broadcasting company NRK.

The white stain on the figure's shoulder is hardly seen from a distance, but becomes perfectly visible upon a closer inspection.

"Samples of the spot have been taken before, but they proved too difficult to analyze. Soon we will get the answer, and then won't have to wonder anymore," Frøysaker said.

© AFP 2020 / Aserud, Lise / NTB SCANPIX
King for a Day: Norwegians Pay Dear for Their Royals
​The answer will be given by means of an X-ray machine, which is going to be used upon the first edition of "The Scream" from 1893.

"We shall scan the entire painting through sending small beams on the surface of the image. This is how we are going to establish what material Edvard Munch used," Dr. Geert Van der Snickt at the University of Antwerp said.

"The Scream" is one of the most admired images at the National Museum in Oslo. Until now, small particles of the painting have been physically removed for analysis.

"Any additional information may prove very important for future conservation and preservation arrangements," Thierry Ford, curator at the National Museum said, praising the new technology, which spares the necessity of further damage to the canvas.

​Earlier, painting conservator Trond Aslaksby colorfully described how the ravages of time have left their mark on the painting that hangs in the National Gallery. According to him, the world-famous painting has suffered damage from dampness and received a couple of powerful slams. In addition, it is full of stains, dust, dirt and small cuts.

"Imagine that you have not washed your curtains for 120 years, and at the beginning they were actually white. How do you think they would have looked like today?" Aslaksby asked rhetorically in an interview with NRK.

© Flickr / Jennie McStotts
Scandinavian Matchmaking: Reunite Norway with Sweden, Norwegian Tycoon Says
"The Scream" is the popular name given to each of four versions of the famous composition, created as both paintings and pastels, by the Expressionist artist Edvard Munch between 1893 and 1910. The National Gallery, Oslo, possesses the original and the most recognizable version.

Remarkably, "The Scream" ranks among the world's most expensive masterpieces, as the 1895 pastel-on-board version of the painting was sold at Sotheby's in London for nearly 120 million dollars in May 2012.

Throughout the late twentieth century, "The Scream" was copied, imitated and parodied countless times, which led to it acquiring an iconic status in popular culture.

That moment when you realize that you're a really weird art kid #andywarhol #thescream pic.twitter.com/pGZ8z4Tq0l