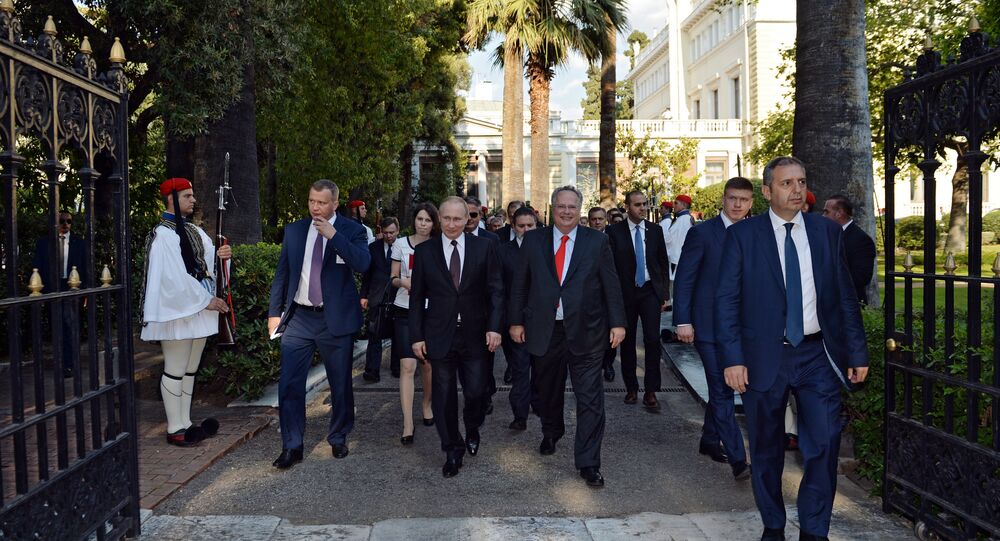 Russian President Vladimir Putin paid a two-day visit to Greece on May 27-28. On the eve of his arrival, Greek media described the measures taken for the security of the Russian president with deep interest and even admiration.

During the visit of the Russian President to Greece, two thousand police were deployed on the streets of Athens, while parking in the city center was banned, local media reported.

Each step of the high-ranking guest was closely guarded by seventy "supermen" from the Russian special forces, whose skills have been ‘a subject of numerous legends', one of the local newspapers wrote.

Russia and Greece are celebrating 2016 as a cross-cultural year, marking the millennial anniversary since the first Russian settlement on the Holy Mount Athos. The Russian President visited Greece to commemorate the historic date and strengthen spiritual traditions and shared values.

© Sputnik
Don't Get Lost: Curious Happenings at Putin's Sochi Summer Residence
The group of experts who prepared the visit of the Russian leader landed in Greece two weeks before Putin's arrival to check all main visiting points of his route. A luxury hotel on the east coast of Attica, where Putin was to stay in for a night, was turned into a fortress to which ordinary people had no access.

Greek media have also debated the fact that the Russian president would use one of three armored limousines to move from one place to another. The cars were especially prepared for the occasion. However, to the great disappointment of the Greeks, Putin was being driven around by his usual motorcade, which, as always, was taken to Greece by plane from Moscow.

Despite numerous posters critical of Putin that were seen on the streets of Athens the relations between Greece and Russia remain traditionally good. According to social surveys, the Russian president is far ahead of European politicians in terms of Greek citizens' feelings towards him.