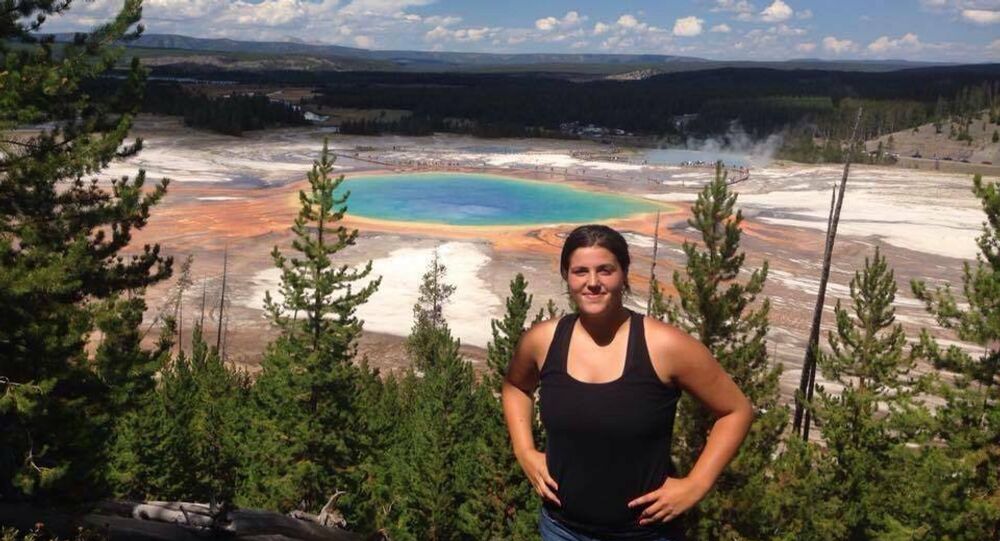 22-year-old Stephanie Tavares of Vaudreuil, Quebec is an ambitious young woman, planning to beat three Guinness world records while visiting every country on earth (that's 201 UN-recognized states!) in a three year period. Speaking to Sputnik, Tavares shared the details of her trip, and explained what it was that motivated her to make the journey.

Tavares' journey will begin in late June, shortly after she graduates from university.

"Traveling to every country in the world is a dream I've always had, but it seemed very unrealistic," she explained in a written interview for Sputnik. "This year I started to think about it more and more, since I knew I was graduating in June. I started to read a lot more about travel and plan it slowly all year, but it is only this past April that I made a definitive decision regarding this journey," the young woman added.

Tavares' will begin the arduous trip in Reykjavik, Iceland. After that, flying to Ireland, she will make her way across Europe, zigzagging north to south and west to east to make it to every country on the continent, before heading south and ending up in Portugal, her mother's ancestral homeland, in about December 2016.

From there, she will move on to Morocco, northwest Africa. "I will then head to the Middle East, Asia, Oceania, South America, Central America and the Caribbean, and I will end my journey in the United States."

© Photo : Youtube/Dude Perfect
11 World Records: Dude Perfect Lands Ball in Basket From 533-Foot Skyscraper
When asked what it is that motivated and inspired her to make the grueling trip, Tavares noted that part of it has to do with spreading the message that travel is not something that should be feared.

"Many people are afraid of traveling, and afraid of faraway nations. When I [say] that I am going to travel, especially as a solo female, most people are concerned and warn me about all the potential dangers."

"What I want to show with this trip is that the world is a much better place than we imagine it to be. And that we, as women, can travel anywhere in the world. I want to empower women to believe in themselves and in their dreams!"

Noting that travel is her biggest passion, Tavares added that to her, it's "a way to open up new cultures, and to learn about the world. There is no better education than being immersed in a new culture and learning about its geography, politics, problems, joys, food, religions, etc."

Asked what the criteria she's using for counting a country 'visited', the young woman explained that she plans on doing a minimum of a couple activities in each country, and to visit the capital.

"There would be no point in me sitting in a train all day and saying I've been to 10 countries in a day…With 201 countries, over three years, I have an average of around 4 days per country. Some I will spend a bit less time in, some I might spend a week or two, but my goal is to spend at least 24 hours in each country."

© Wikipedia / NoPlayerUfa
Russian Cathedral Named One of Top 10 Landmarks in the World by TripAdvisor
Asked whether her Portuguese ancestry and Portugal's proud history as a nation of explorers, including Ferdinand Magellan, has anything to do with her thirst for travel and adventure, Tavares said there may be something to be said in that regard. "It is an amazing thing to think that some of my ancestors were great travelers. I hope that with this expedition, I too can leave a traveling legacy to future generations."

Asked about the cost of such a trip, the young woman explained that given the scope of the trip and many difficult-to-calculate variables, she estimates that it will cost anywhere from $30,000-$70,000. "I am now looking at corporate sponsorships to help fund my expedition. So far, Jet Setter (a Montreal travel store), and Eureka! (a camping company), are providing me all my gear for the trip. I hope that over the course of my expedition I gain more sponsors as well." Tavares also plans on setting up a crowdfunding webpage, saying many people have already encouraged her to do so.

Tavares told Sputnik that social media users would be able to follow her along all during her trip. "Right now, I have a Facebook page, Instagram and Snapchat set up for this expedition…Once I have some footage I will also start a YouTube channel."

During her trip, the young woman noted that she hopes to raise some money for Tostan, a US charity encouraging sustainable development and community empowerment. "I wish to raise some awareness and money for this worthwhile cause," she said.

Asked about how she plans to travel through dangerous and war-torn countries such as Somalia, Syria and Iraq, Tavares noted that her plan "is to continuously stay aware of the local situation as well as having a quick entry and exit strategy."

"So far, I have spoken to some people who currently live in Syria, with regard to the current state of the country. They have informed me that there is one safe route at the moment, from Beirut, Lebanon to Damascus, Syria. Once I get closer to such countries, I will make sure that the routes I wish to take are still safe for me to use."

Ultimately, Tavares emphasized that she hopes the trip will see her "grow as a person, learn more about the world, and enjoy my time as a free human being. What I expect on a bigger scale is to inspire people not only to travel, but also to believe in themselves, and in their dreams, no matter how impossible they might seem."

Moves Like Jagger: Top-10 Politicians Who Rocked the Dancefloor (VIDEOS)

Spanish Ballerina Turned Cyborg Senses Every Earthquake in the World