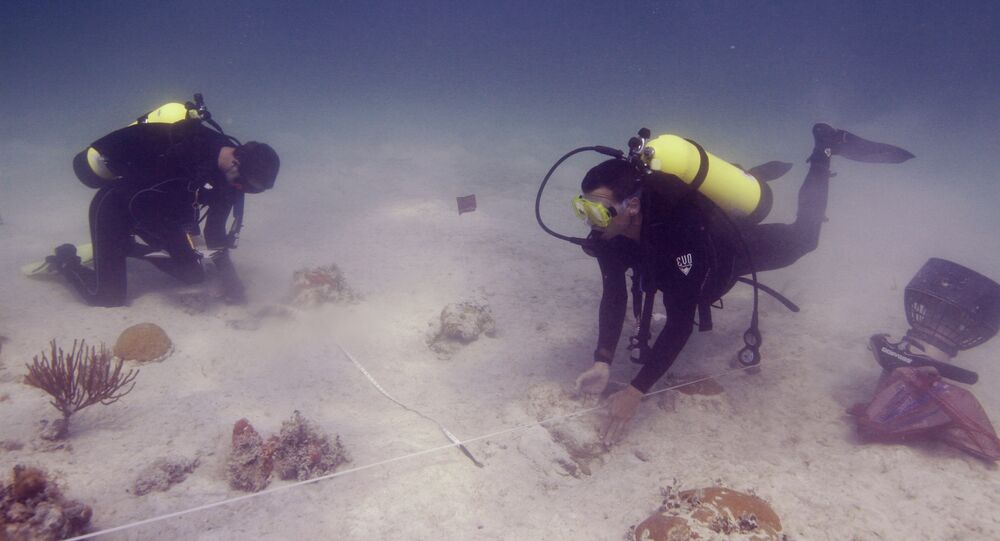 Underwater excavations of a Florida sinkhole suggest the first human settlers arrived in Florida from Siberia at least 1,500 years before the so-called "Clovis culture" of ancient humans came to dominate the North American continent.

© Photo : youtubify.ru
Building a Human: Scientists Prepare to Synthesize Human Genome Within a Decade
Kristian Rouz — Several artifacts which were recently recovered from a Florida sinkhole might be evidence of the first human settlers who arrived in the area from Siberia across the Bering Strait roughly 14,500 years ago, at least 1,500 years earlier than previously thought. A team of researchers from Texas A&M University and Florida State University made the discovery while working on the archaeological site 30 miles southeast of Tallahassee, FL. They have confirmed theories which have existed for about ten years that humanity arrived earlier in the modern-day Southeastern USA than was earlier believed.

Archaeologists from Texas A&M University conducted excavations at the Page-Ladson site, a cave filled with water in Florida, between 2012 and 2014. They found, among other things, a stone knife and other tools, along with mastodon bones and fossilized excrement. As reported by Science Advances magazine, the findings date back to at least 14,500 years ago, providing clues about the earliest stage of human colonization of the Americas.

Previously, scientists believed the first humans reached Florida no earlier than 13,000 years ago, when the so-called Clovis culture of ancient people formed. The Tallahassee sinkhole has been "just politely ignored" in the paleo-historical debate in the past ten years since it was first discovered, Mike Waters of Texas A&M University said.

The 200-foot wide sinkhole, as suggested by researchers, might have served as an assembly point for animals, which, in turn, attracted hunters, for whom the prey "probably would have been easy pickings," Waters said. Today, the sinkhole is 30 feet deep and "as dark as the inside of a cow, literally no light at all," Jessi Halligan of Florida State University said. During her work at the site, Halligan dove into the sinkhole 126 times, wearing full diving gear and a headlamp. The discoveries were worth the effort, but would necessitate the further examination of the artifacts which were retrieved.

The stone tools found in the sinkhole include a knife that's an inch-wide and several inches-long, as well as a ‘biface' — a flat stone with edges sharpened on each side. The mastodon bones, also found nearby, bear traces of human manipulation; the ancient people presumably pulled the animal's tusks out of its skull in order to get to the meat.

"Each tusk this size would have had more than 15 lbs of tender, nutritious tissue in its pulp cavity," said Daniel Fisher of the University of Michigan, who previously worked with mammoth remains found in a Siberian congelation.

As for the "biface" tool, the researchers are confident of its manmade origins. "There is absolutely no way it is not made by people. There is no way that's a natural artifact in any shape or form," Halligan told Smithsonian magazine.

© Photo : Institute of archeology RAS
Medieval Moscow Calling: Archaeologists Dig Up Tale of Woe From Middle Ages
The researchers suggest the group of humans who left traces of their presence near Tallahassee 14,500 years ago were forced to move south by dire winter conditions across the North American continent during that era. The migration transpired more quickly than previously assumed. While the first humans arrived in North America from Siberia roughly 32,000 years ago, they settled all across Alaska only 26,000-18,000 year ago. While previous studies alleged the human settlers arrived in Florida 13,000 years ago, the Tallahassee waterhole provides evidence of a more complex migration pattern: the first humans in the area might have been nomads, moving south in winter, and north in summer.

"The evidence from the Page-Ladson site is a major leap forward in shaping a new view of the peopling of the Americas at the end of the last Ice Age," Waters of Texas A&M University said. "In the archeological community, there's still a terrific amount of resistance to the idea that people were here before Clovis."

Since the first discovery of pre-historic human activity near Clovis, NM, in the 1930s, scientists have believed the "Clovis culture" of ancient humans, dated back to 13,000 year ago, were the very first colonists in North America.  However, the Page-Ladson findings now open a new chapter in the history of human settlement in the Americas.

"I think this paper is a triumph for underwater archaeology and yet another nail in the coffin of the Clovis-first theory," Jon Erlandson of the University of Oregon said.

The Florida sinkhole discoveries also confirm that humans and megafauna coexisted in North America for 2,000 years before mastodons became extinct.

Doomed? For the First Time in Human History, Old Will Outnumber Young