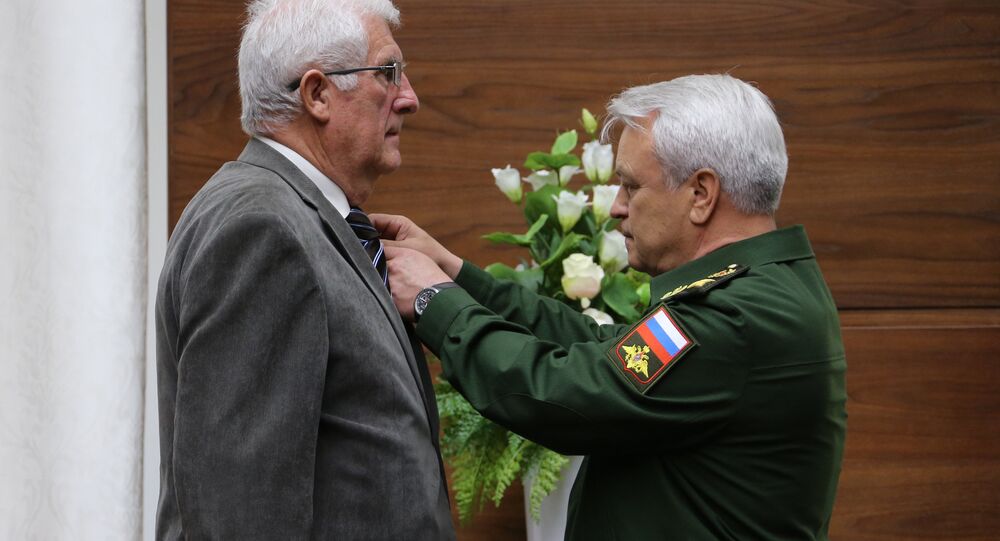 The Russian Defense Ministry awarded its departmental medals to the Magues, a French couple that sent their WWII-era military decorations to the family of Russian soldier Alexader Prokhorenko, who died in Syria.

"The leadership of the Russian Defense Ministry is grateful for your compassion and your desire to share the grief with the family and friends of hero Alexander Prokhorenko… Let me, on behalf of the Russian Minister of Defense, present you the awards from the Russian Ministry of Defense for your personal contribution for the strengthening of friendship and understanding between our nations," Deputy Defense Minister Nikolai Pankov said during a meeting with the Magues.

"We didn't even expect to have such hospitality," Mrs. Mague said.

During the meeting the Magues personally handed their own medals to the family of Prokhorenko. One of the medals is the Legion of Honor and the other the War Cross with Bronze Palm Leaf. The medals were given to family members of the Magues who fought against Nazis as part of French resistance groups during World War II.

Last month, the Magues sent the medals and a letter of gratitude to the Russian ambassador in France, asking him to forward the medals to the family of Prokhorenko.

© Sputnik
French Couple Who Sent Medals to Russian War Hero Say He Reminded Them of Own Son
In response to their gesture of solidarity and support, Russian President Vladimir Putin invited the French couple to visit Moscow to attend the Victory Day Parade on May 9 and said that he would like to meet them personally. Upon the invitation, the Frenchmen asked the Russian Embassy if they could give their medals to the family of Prokhorenko themselves, in person.

The parents of Prokhorenko thanked the Magues and everyone who supported them after the death of their son.

Prokhorenko, the 25-year-old Russian senior lieutenant, was killed during the military operation to liberate Palmyra from the terrorists who had defaced, dynamited and looted its ancient treasures. He was working on the ground, providing intelligence and working as an airstrike spotter to assist in Russian attacks on Daesh targets in the city.

During the operation, Prokhorenko's location was tracked and he was surrounded by terrorists. To avoid being captured, possibly tortured and interrogated, the young man called an airstrike on his own position.