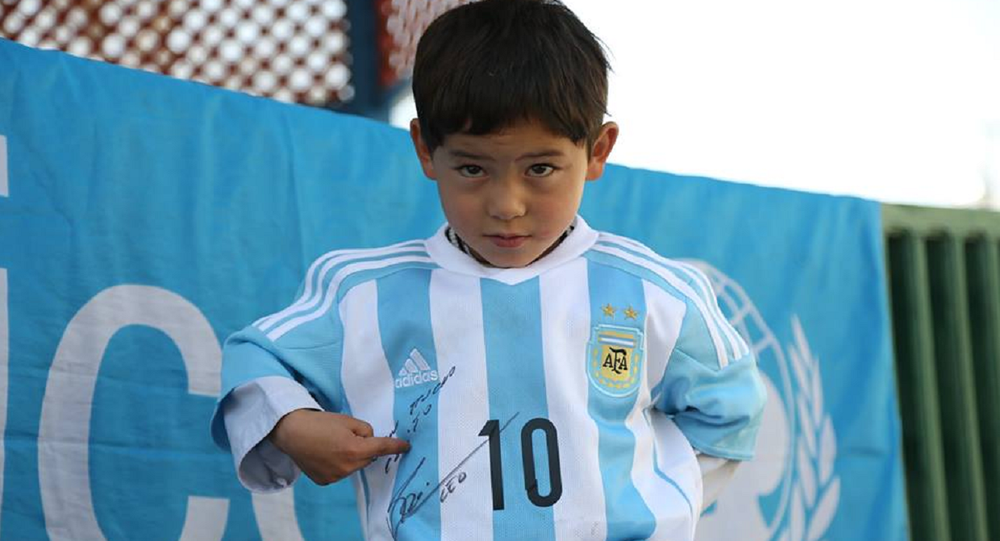 A five-year-old Afghan boy who became famous after making a Lionel Messi jersey out of a plastic bag was threatened by the Taliban and was forced to flee Afghanistan.

© AP Photo /
Taliban Announces 'Spring Offensive' in Afghanistan
It all began when Murtaza Ahmadi from an impoverished Afghan village captured the world's attention after making a football jersey from a plastic bag, drawing the number 10 and the word Messi on it. Eventually, the boy's pictures caught the eye of Lionel Messi himself and the football superstar ended up sending Murtaza an autographed shirt.

It seemed like a dream come true for little Murtaza. He not only received a shirt from Messi himself, but also grabbed the attention of international media.

But trouble soon came unexpectedly. Shortly after the media spread photos of Murtaza wearing the Argentine's shirt and created a huge interest on the Internet, the Taliban began sending threats to the boy's family.

The Taliban wasn't happy that instead of learning the Koran, the little boy was playing football and posing for the international media.

According to Murtaza's father, Muhammad Arif, his family received threats and now fears the terrorists would kidnap his son.

© Photo : Facebook/ Unicef Afghanistan
Father of Afghanistan's 'Little Messi' Hopes for Boy's Bright Future
The family had to flee their home province of Ghazni, as the situation was getting very dangerous for the little boy to be there. Arif quickly sold everything he owned and fled from Afghanistan to Pakistan.

Currently, Murtaza is staying at his uncle's place in Quetta, Pakistan's Balochistan province.

"If my nephew was kidnapped, his family wouldn't be able to pay a ransom. Murtaza's father is a man with limited financial means. That's why he thought that the best way out of this situation would be to send his son here. Right now, Murtaza is safe," Vahid Ahmadi, Murtaza's uncle, told Sputnik over the phone.

Ahmadi also added that the family already contacted the Afghani and Pakistani governments, as well as the UN and various football federations to help make the little boy's dream of meeting Lionel Messi in person come true.

Earlier the boy's father said he hopes Murtaza would be able to use his new fame to train and become better at playing football.

'Messi Loves Me': Afghan Boy After Putting On Jersey Sent by Football Star