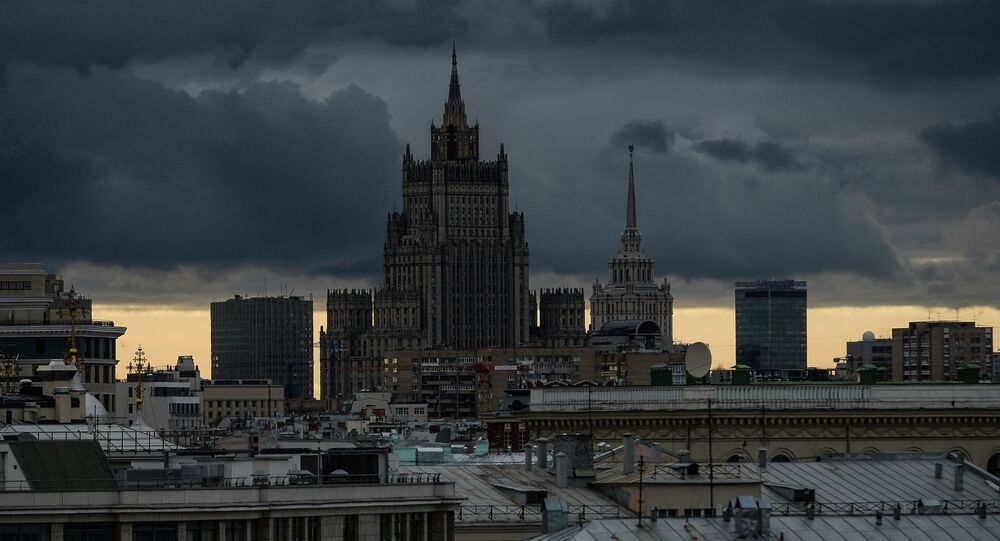 Russian design and architectural journalist Andrei Zakharchenko ponders the mysterious reason for the creation of the seven sisters, the penultimate projects of the Stalinist Empire style. Why were they really built, and what kinds of urban legends surround them today?

In his piece, published in the independent Russian newspaper Svobodnaya Pressa, the journalist begins by recalling that the official reasons for the buildings' construction are actually pretty boring.

© Sputnik / Anatoliy Garanin
Back to the USSR: Seven Legendary Soviet Brands
"In the resolution of the Council of Ministers No. 53, dated January 13, 1947, the first paragraph reads, in the dry official language, that the organ has adopted Comrade Stalin's proposal to build eight high-rise buildings within a five year period, five of which are to have 16 floors, two 26 floors, and one 32 floors. The following paragraphs concern the buildings' planned location, and specify that their proportions and silhouettes must be of an original design, and should not be similar to other well-known examples of high rise buildings abroad."

"There are several possible answers to the question as to why Stalin required the construction of such buildings, at a time when the country's economy was still in ruins following the Second World War," Zakharchenko notes.

"According to one version, Stalin did so simply as a nod to gothic architecture, which he liked. According to another, more common version, setting out a construction project of this magnitude, he wanted to 'catch up and overtake America' and to show the world that the soviet Union had not been bled white, but stood firmly on its own two feet."

© Sputnik / Sergey Guneev
A view of the Hotel Ukraina from across the Moscow River.

"But some researchers," the journalist added, "take particular note of the fact that the foundations of all of the buildings were laid not only on the same day, but even at the same hour, on September 7, 1947 at exactly 1 pm, and that all other construction works in the city were halted on that day."

"Perhaps this was done to emphasize the seriousness of the moment, but, according to Moscow astrologer Vladimir Ivantsov, the date of the commencement of the construction of the buildings was hardly accidental. During this period, he says, the arrangement of the celestial bodies imbued the buildings with a special energy and an extraordinary fate."

Furthermore, "linking the number of stations in the Circle Line of the Moscow Metro (12, the same as the number of signs in the zodiac horoscope), and the number of planned high-rise buildings (8, including the never-built Zaryadye Administrative Building off of Red Square), followers of esotericism believe that Stalin wanted to rebuild Moscow to generate cosmic energy on its territory, which is why he insisted that all the buildings were topped by spire antennae. And the energy was intended to be used to prolong the lives of the party elite."

© REUTERS / Ints Kalnins
Skrunda-1: Top Secret Soviet Base Turned Into Ghost Town
11
Speaking to the newspaper, Sergei Petunin, organizer of a local historical club, said that "proponents of this legend point to the fact that all the party bosses to ever stand on the podium of the Mausoleum had a long life. For example, [administrative genius] Lazar Kaganovich would live age 98, [foreign minister] Vyacheslav Molotov to age 96, and [military commander] Semyon Budyonny to age 90. After all, the Mausoleum is in the shape of a pyramid, even if it is a little one," Petunin noted.

And, according to Mikhail Lebedev, a design engineer and graduate of the Bauman Moscow State Technical University, the Stalinist Seven Sisters were to serve as the 'big pyramids,' oriented toward the location where it was planned to build the never-completed Palace of the Soviets, a gigantic, 495 meter tall building featuring a giant rotating statue of Lenin.

© Wikipedia
The never-completed Palace of the Soviets.

"Such a system," Lebedev noted, brings to mind associations with a [giant] rotor fixed in a stationary housing, which fuels rumors that, in place of the Cathedral of Christ the Savior, the communists planned to build a giant torsion generator."

"According to psychics," Zakharchenko continues, "radar frames near the skyscrapers now behave unpredictably, and, at certain times, the walls of buildings begin vibrating spontaneously."

"All of this occurs because the Palace of the Soviets, to which the Seven Sisters aimed to give their accumulated energy, were never built," Stanislav Verzev, a student of the Hamburg School of Astrology, told the newspaper. "It is for this reason that a portion of one of the towers of the Hotel Ukraina collapsed in 2007."

In addition to legends about their purpose, a series of fantastical legends also exists about the grounds on which the Seven Sisters are built. For example, ghost sightings are a common occurrence at the side towers at Moscow State University. "According to students, they often appear in slippers, and are always silent."

Moreover, "one of the most popular legends about university high rise building says that, from time to time, a so-called 'wandering lecture audience' appears. Spread by student word of mouth, the legend goes that the audience appears only to those who are poorly prepared for their exams." After a visit from the spirts, "students successfully pass their tests, but asking them how they were able to do so is pointless, because their memories have been wiped."

"Another ghost, according to legends, can be seen in the high-rise at the Red Gates Administrative Building, this one nicknamed the 'howling laugher'."

"The legend goes that this is a low-level official from the Ministry of Transport Machine Building Industry, which was once housed here," says Sergei Derevschikov, literary critic and collector of modern urban folklore. "Falling in love with the wife of a supervisor, he once told her a spicy political anecdote, and the women, having a good laugh, relayed the joke to her husband. Failing to see the humor in the joke, the husband reported the junior official, who was taken to a psychiatric hospital, where he died. Soon, the building's occupants would meet him again, laughing in the walls of the high rise."

Whatever else might be said about the Seven Sisters, and the legends that surround them, there's no doubt that they add grandeur to the Moscow skyline, and remind Muscovites that even as times change, legends, like the buildings themselves, will remain.

Do You Know That Russians Live Upside-Down and Dine in Barrels? Have a Look