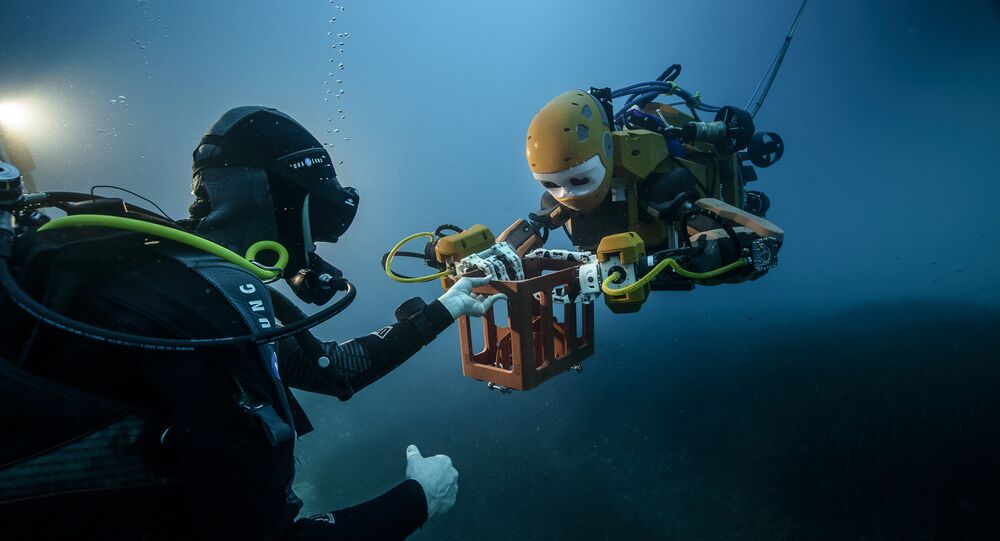 A group of US researchers have managed to create an articulated robot that can dive and explore underwater shipwrecks, according to news reports.

Pinewood Studios
'Yes My Lord, What Can I Do for You?' China Unveils 'Robot Goddess'
A robot with rotary joints which is capable of diving and exploring underwater shipwrecks has been developed by a team of researchers from Stanford University in California, media reports said.

Called OceanOne, the robotic diver is powered by artificial intelligence and haptic feedback systems, which gives its human operators an unprecedented ability to explore the depths of the oceans in high fidelity.

Even though the five-foot-long OceanOne has a basic level of artificial intelligence and autonomy, a human pilot is still needed  to ensure that the robotic diver's arms doesn't damage delicate corals or the disintegrating haul of a ship.

"You can feel exactly what the robot is doing. It's almost like you are there; with the sense of touch you create a new dimension of perception," Oussama Khatib, a professor of computer science at Stanford, said.

It is worth noting that although oceanographic researchers have been using remotely operated rovers for decades, their underwater abilities were often limited to just a crude robotic arm and pincer for grabbing objects.

© Photo : NHK
Educating Pepper: Japanese Robot Celebrates First Day at School
In this regard, OceanOne appears to be almost as capable as DARPA's ATLAS robot, but tailor-made to easily maneuver underwater, according to the news website Gizmodo.

"Its compact size also means it can squeeze into parts of a shipwreck that are too deep for human divers and too small for a submarine," the website said.

Meanwhile, it was reported that during its very first dive, the OceanOne humanoid robotic diver helped researchers recover a whole array of treasures and artifacts from King Louis XIV's wrecked flagship.