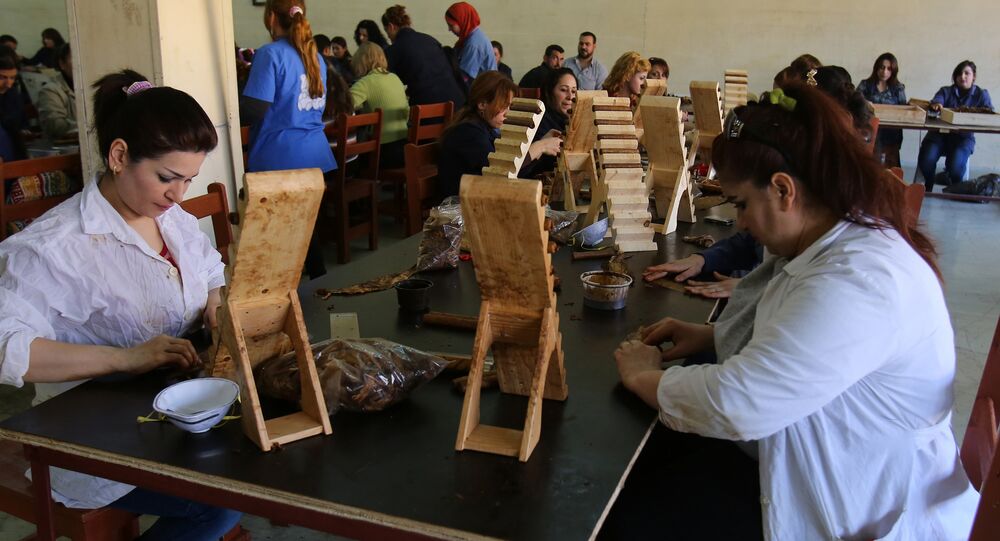 For over 5 years war has rocked Syria killing about 250 thousand people. Currently, a fragile ceasefire has been established in the country. Parliamentary elections are scheduled to take place on April 13 in Damascus and several other Syrian cities.

© Sputnik
Sisters-in-Arms: Syrian Women Fight Daesh to 'Take Back Their Homeland'
The country lies in ruins and there is massive devastation of infrastructure but Syria has loyal civilians who have stood their ground throughout the war and are now making every effort to rebuild their beloved home country.

As it often happens in times of war, the task of family preservation which is the foundation of any society rests on the shoulders of women.

Due to the damaged economy and non-functioning public institutions, many women have become completely dependent on non-governmental organizations.

One of the largest institutions operating in Homs is called ‘Martyrs' Association’. To help women get back on their feet, the organization has founded several companies, including a textile factory.

Women who lost their husbands, sons and brothers have found some kind of solace in their work.

“We were hit hard by the death of my husband. After that, our life changed. It is very difficult. Me and my children have lost their support,” factory worker Ibtisam told RT in an interview.

© Sputnik
Meet the Head of Syrian Kurds' Women Fighters, Who Kill and Humiliate Daesh
The factory sews military uniforms and civilian clothes. The first stage of the production process is the straightening of the material and then cutting it.

“My daughter was studying at a university. She had to quit her studies because I did not have enough money. What I get here is my only income,” another employee said.

This factory employs about 200 people. Each month they receive a base salary and a portion of profits from the products made. The majority of workers are women who lost their husbands, fathers, sons or brothers in the war.

“My son died at the age of 27. He was shot in the head by a sniper. I have a second son, he is married with two children and he serves in the army. We all feel the need,” local resident Samira told RT.

The factory management tries to take care of its employees. There is a place where one can leave small children who have not yet enrolled in school. The company also has a medical center where doctors are ready to provide medical assistance to employees who are injured at work or are experiencing health problems.

These women carry a heavy burden of grief. They are the unknown heroes of Syria. Despite the heavy blows of the war, they continue to hope for the best and are working hard for a brighter future for their families.

Syrian Women Unite to Save Christian Towns From Daesh