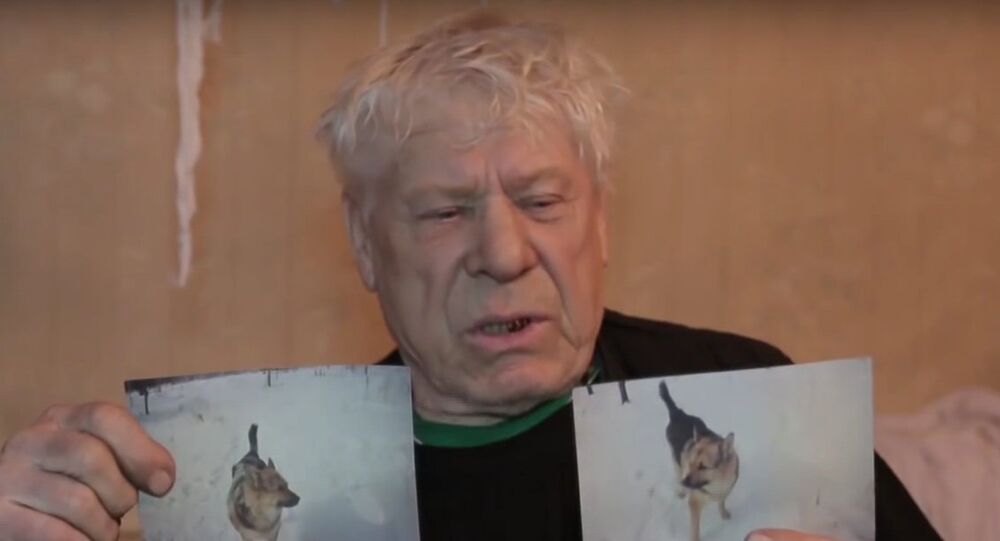 Died of a Broken Heart? Elderly Man Passes Away Failing to Find His Friend

A 77-year-old Russian man, who had been searching for his only friend, a German shepherd named Yan, who went missing two months ago, died of a heart attack in a hospital.

© Photo : Noyev Kovcheg's vkontakte
A Man About a Dog: Devastated Widower Searches for Missing Friend
Vladimir Davydov, 77, was taken to hospital in late March and died of a heart attack on April 1.

Up to his very last day the elderly resident of the Russian city of Bratsk in Siberia has been searching for his only friend, an 11-year-old German shepherd, who went missing two months ago.

Ever since Yan disappeared, who was allegedly stolen by dog thieves, the man would pace the streets each day wearing a sign saying 'Help Me Find My Friend' with a picture of the missing dog attached below the caption.

His sad story attracted hundreds of volunteers eager to help the old man, however the joint search produced no results.

​His supporters are now appealing on social media to raise the money for his funeral, as the man apparently had no savings.

According to one social media group, which helped the pensioner in his search, his only relative, a sister, resides in Ukraine and it will take quite a time to locate her.

The group has asked users to donate just 50 rubles each (less than a dollar) for his funeral.

“Let’s help his sister have a normal funeral and bury him decently. We all know how expensive it is now,” the post reads.

Ever since Davydov’s wife passed away, the dog has remained his only companion, providing him with crucial emotional support and helping him cope with his otherwise lonely existence, according to Russian media reports.

Media reports suggest that volunteers plan to resume the search for his missing four-legged friend and to solve the mystery of his disappearance.

They also want to make a small monument to honor the man, his pet and their true friendship.

Yan ended up in the old man’s care purely by chance and literally grew up in the playground.

The old man used to reminisce that some of the kids who played with him now have kids of their own, but they still used to come to visit him.