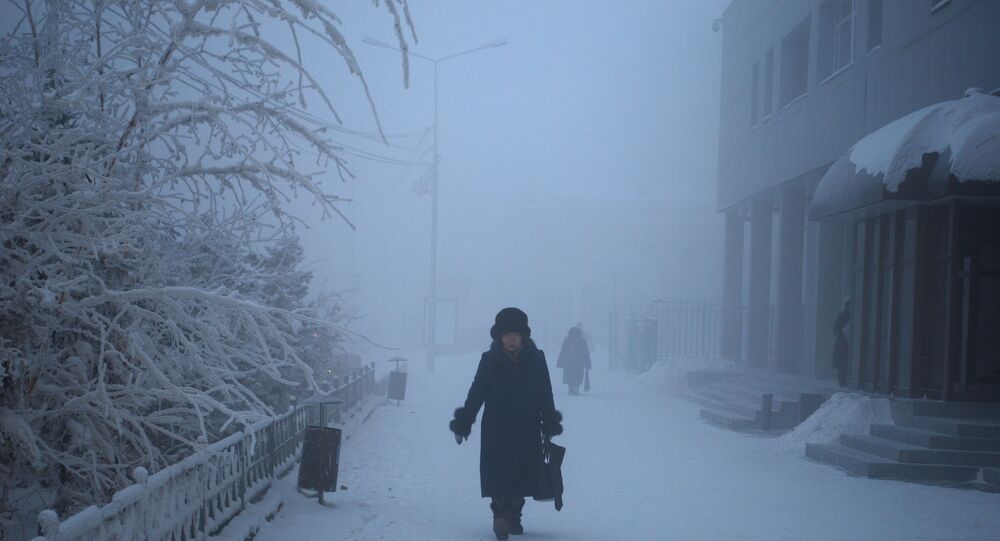 Coldest Place on Earth: Russian City Where -45 is 'Pretty Warm'

While many in Moscow complain that the spring hasn’t been warm enough, people living in the northeastern Siberia are happy with -35ᵒ C [-31 Fahrenheit], as it’s much better than last month when temperatures dropped to -45ᵒ C [-49 Fahrenheit], a Die Welt correspondent wrote after visiting the city of Yakutsk.

With a population of 300,000 people, Yakutsk is the largest northernmost city in the world. In comparison, the northern Canadian cities of Yellowknife and Whitehorse, for example, which are situated roughly on the same latitude as Yakutsk, are home to a little over 20,000 inhabitants.

Extremely cold temperatures are common in Yakutsk and the Sakha Republic in general. The Verkhoyansk Range, the coldest area in the northern hemisphere where the lowest naturally occurring temperature at —71.2ᵒ C [-95.8 Fahrenheit] was recorded, is situated not far from Yakutsk in the Sakha Republic.

"It's pretty warm today," a local resident told Die Welt. "Several days ago it was —45ᵒ C [-49 Fahrenheit]. You brought some warm weather with you!"

During the long and cold winter seasons, locals survive by wearing fur clothes. When it's below —45ᵒ C [-49 Fahrenheit] other kinds of clothes simply won't keep the body warm. Western anti-fur organizations would be thought out of touch here.

© Photo : REX/Amos Chapple
A young student poses for a portrait at a bus station in Yakutsk

The city is the capital of the Sakha Republic (Yakutia) which is by the way the largest geographical federal subject within Russia. Though geographically, Yakutia is nine times bigger than Germany, its population is only about one million people, Birgit Schmeitzner wrote for the German newspaper Die Welt.

The republic is mostly populated by Yakuts, a Turkic ethnic group speaking a Siberian branch of the Turkic languages, and ethnic Russians, making up roughly the half of the population of the Sakha Republic.

© Photo : Youtube/SCIENCE and LIFE
Russian Scientists Find Ancient Bacteria That Can Lead to 'Elixir of Youth', Destroy Industrial Waste
Today, Yakut people are mostly Orthodox Christians after missionaries, who came to Yakutia with Cossack settlers during the 16th and 17th Centuries and converted the local population to Christianity.

Nevertheless, some Yakut people practice their original pagan traditions, including Shamanism and other spirit-based local beliefs. Oftentimes, Paganism is practiced alongside with Orthodox Christianity.

During her visit, the German correspondent was taken to the countryside of Yakutia where she traveled on a dog sled. Dogs used to pull a sled are the local breed of hunting dogs, known as Laikas. On the outside, Laikas resemble Huskies. In fact, the two are closely-related, but aren't exactly the same breed.

"These are Yakut Laikas — the very ancient Northern breed of dogs. Due to their thick fur they can spend entire winters outside. They aren't as wild as Huskies and at the same time they're very tough and friendly," local woman Lena Sidorova explained to Die Welt.

In some parts of the Sakha Republic roads are virtually non-existent. That's why locals use dog sleds and four-wheel drive offroad vehicles to travel where possible. During short summer seasons, river travel becomes available.

© Sputnik / Alexander Lyskin
Global Warming Could Lead to Home Destruction in Russia’s Arctic Circle
Yakutsk has a number of exciting sights that might interest tourists. The city has a beautiful old quarter built in the 17th Century. Unfortunately, it's soon due for demolition as city authorities are planning to build new apartment buildings instead of the historic area, Die Welt reported.

"We're seeking our own style. But Yakutsk needs modern housing which wouldn't damage the permafrost soil. We must try to survive in this cold," said Irina Alekseeva, one of the city's architects, as cited by Die Welt.

Despite its isolation and extreme temperatures, Yakutsk is one of the cultural centers of the Russian Far Eastern District. The city has a number of theaters, museums and has a big, federal university with over 23,000 full-time students. During summers, the city wakes up from the long winter hibernation and transform into the place of festivals and celebrations.