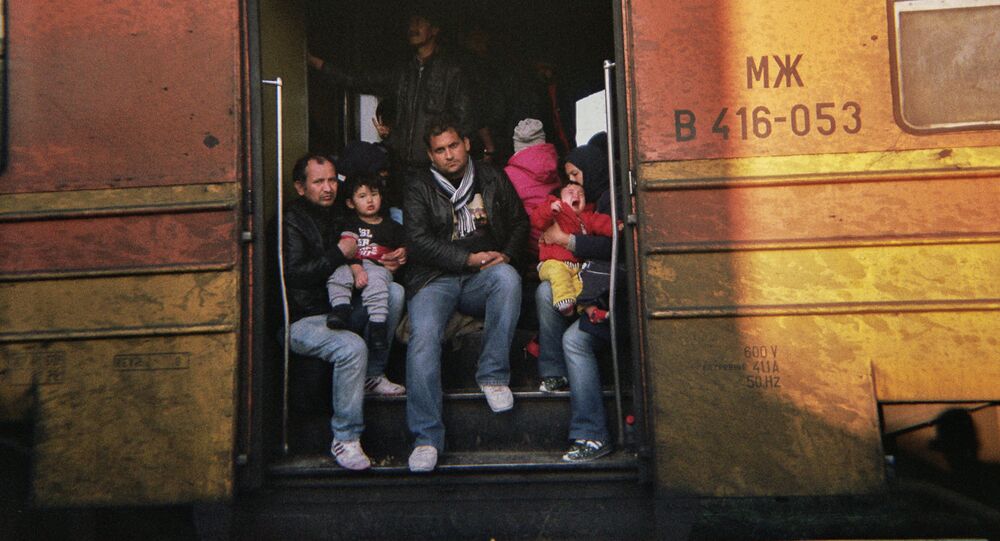 Late last year, German photographer Kevin McElvaney decided to conduct a unique experiment: giving single-use cameras to refugees he came across in Turkey and Greece and asking them to document their journey to Europe visually. Since then, cameras have been trickling in; Sputnik interviewed McElvaney to ask about the inspiration behind the project.

© REUTERS / Alexandros Avramidis
New EU-Turkey Deal Refugee Deal Runs Into Problems on the Ground - NGO
Meeting refugees in Izmir, Turkey, and Lesbos, Athens and Idomeni, Greece in December 2015, McElvaney gave out 15 disposable cameras, along with prepared postage envelopes, to refugees, as they prepared (or continued) their journey to Western Europe. Since then, his website notes, the freelance photographer has received back 7 of the cameras, and been informed that 5 more were either lost, confiscated by border authorities, or still in Izmir, because the would-be refugees failed to make it to Greece. 3 more cameras and refugees are yet to turn up.

The project, McElvaney writes, "is an attempt "to give one of the best documented historic events of our time a new perspective," with "the refugees themselves [given] the opportunity to document their own journey through photography."

© Photo : Kevin McElvaney
Photo from the RefugeeCameras project.
Speaking to Radio Sputnik on Monday, McElvaney expanded on what he meant. "It's a kind of honest voice from them because it's more or less a first person view; it shows that this journey is a terrible one, and that many people suffer from it." At the same time, he added, "you see that there is also a positive attitude, and I more or less think you will see it when you look at the pictures which refugees took near the end."
The mainstream media's coverage of the refugee crisis, the photographer suggested, is often careless in its portrayal of the situation. "I think we have to be careful for example with showing these kinds of drone footage where you see a huge amount of refugees walking over the fields of Serbia; some of these pictures reminded me of medieval knights movies or something where you see knights marching over the fields; I think this gives many people a negative and [uncertain] feeling, and maybe this leads to the situation we have right now."
© Photo : Kevin McElvaney
Photo from the RefugeeCameras project.

Ultimately, the photographer said, apart from his curiosity in 'just seeing what happens' with the project,  his goal is to offer a uniquely new perspective.

"Usually, we always want to tell the story and we have our photographers, who take the pictures; but I think these people can also have a voice themselves and show what they want to share," McElvaney concluded.