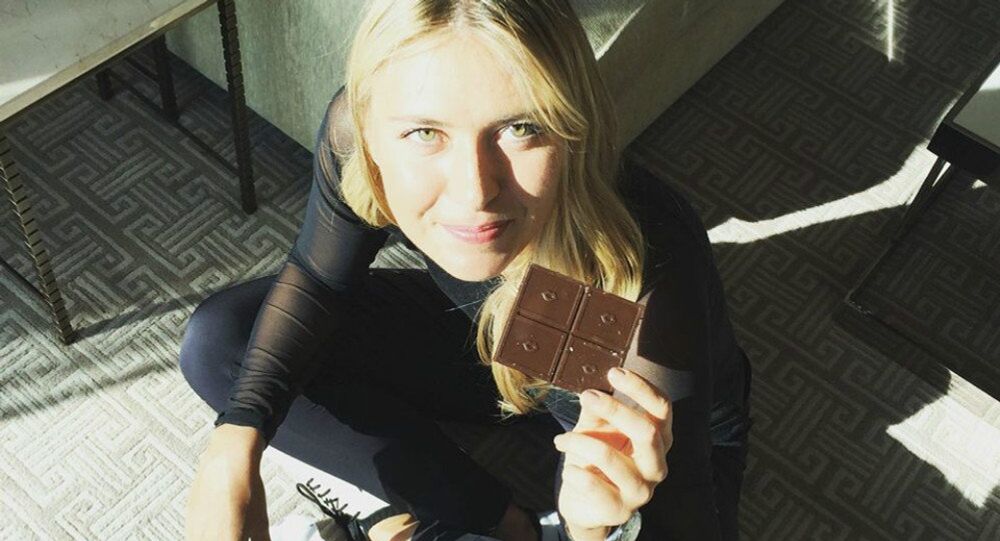 Confectionary manufacturer Baron Chocolatier has announced that it will not follow in the footsteps of some other big-name sponsors of Maria Sharapova, and is going ahead with the upcoming launch of a new line of premium chocolates for the "Sugarpova" brand.

© AFP 2021 / ROBYN BECK
Show of Support: Fans and Tennis Players Extend Sympathy to Sharapova Over Drug Scandal
Chocolate manufacturer Baron Chocolatier is maintaining its support for Maria Sharapova, and will continue to produce chocolates for her Sugarpova brand of confectionary.

"Maria has been a role model for millions of people and she is a woman of integrity," Christopher Mattina, Baron Chocolatier’s senior vice-president, told the Guardian.

"We think she made an honest mistake and she deserves credit for being open and direct about it. We hope she will be allowed to play tennis again but no matter what, we are proud to stand by Maria and to support her in this venture."

On March 7 Maria Sharopova called a press conference to announce that she has been provisionally suspended from competitive tennis after testing positive for the banned substance meldonium during a drugs test at the Australian Open.

The World Anti-Doping Agency (WADA) added the drug to its list of banned substances on January 1 2016; it was not prohibited previously. On Friday  the agency revealed that it has recorded 99 positive tests for meldonium from different sports since the beginning of the year.

© Photo : mariasharapova.us
Maria Sharapova
"I did fail the test and take full responsibility for it," said Sharapova, and explained that she knew the drug under another name, mildronate, and had been taking it for the past ten years having been prescribed it by a family doctor because of health issues including signs of diabetes.

While sponsors Nike, Tag Heuer and Porsche have suspended their collaboration with Sharapova, racket manufacturer Head has also stood by the five-time grand slam winner.

"We question Wada's decision to add meldonium to its banned substances list in the manner it did; we believe the correct action by Wada would have been to impose a dosage limitation only," Head stated.

© REUTERS / Thomas Peter
Sharapova Thanks Fans for Support Amid Doping Scandal
"In the circumstances we would encourage Wada to release scientific studies which validates their claim that meldonium should be a banned substance."

On Wednesday the inventor of meldonium, which was developed to treat diabetes and various heart-related diseases, criticized the decision to add it to the list of banned substances.

"We will see many deaths on the field," Ivars Calvins told the BBC.

"This drug was on the market for 32 years — as a self-protective agent — and now suddenly it becomes forbidden."