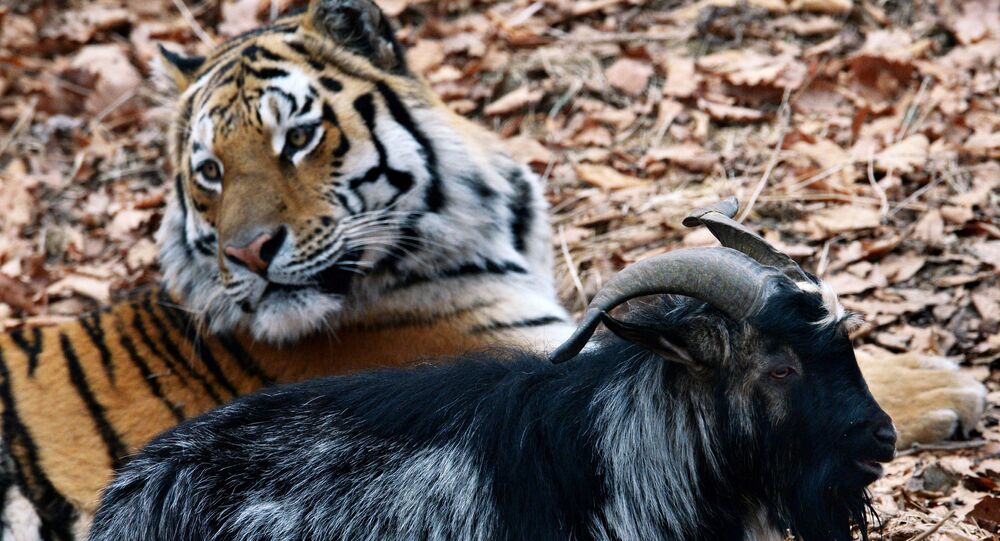 You've Goat to Be Kidding! Timur’s Dark Past Revealed

The truth is finally out: Russia’s most famous goat – Timur - once used to go by a different name and, on top of that, he was a polygamist too!

© Sputnik / Vitaliy Ankov
Old Friendship Dies Hard: Goat Timur Sticks with Tiger Amur, Ignores ‘Fiancées’
The details of Timur’s dark past surfaced when the horned celebrity was picking his future spouse during a recent contest at the safari-park in Russia’s Far East.

It all started with the arrival of Lady – a she-goat who happened to be Timur’s ex — and their offspring. They were brought along by Yevgeniya Kovalyova, who revealed that Timur once went by the name Baron and was born near Vladivostok on July 8, 2014.

“His mother was absolutely jet black… He was her only child, so he was well fed and grew up big and strong. A real bully,” Yevgeniya said.

She also spilled the beans about Timur’s family life, saying that Timur was going to wed for the fourth time. He and Lady bore two children and the five others were brought into this world by two different mothers.

“Yevgeniya sold Baron to the safari-park on November 2, 2015, which means that he could have fathered these five kids… We are still going to make sure with a DNA test,” the park’s director Dmitry Mezentsev said.

© Sputnik / Vitaliy Ankov
Crime and Punishment: Cheeky Goat Timur "Disciplined" by Tiger Amur (VIDEO)
Late last year the animal park’s authorities gave the goat to the tiger in his cage as a meal but instead of devouring it, the tiger seemed to have developed a bond with the goat.

The pair turned into a huge tourist attraction for Russians due to their unlikely relationship, which involved tiger Amur giving up his bed to goat Timur, with the videos of their peaceful cohabitation going viral on the web.