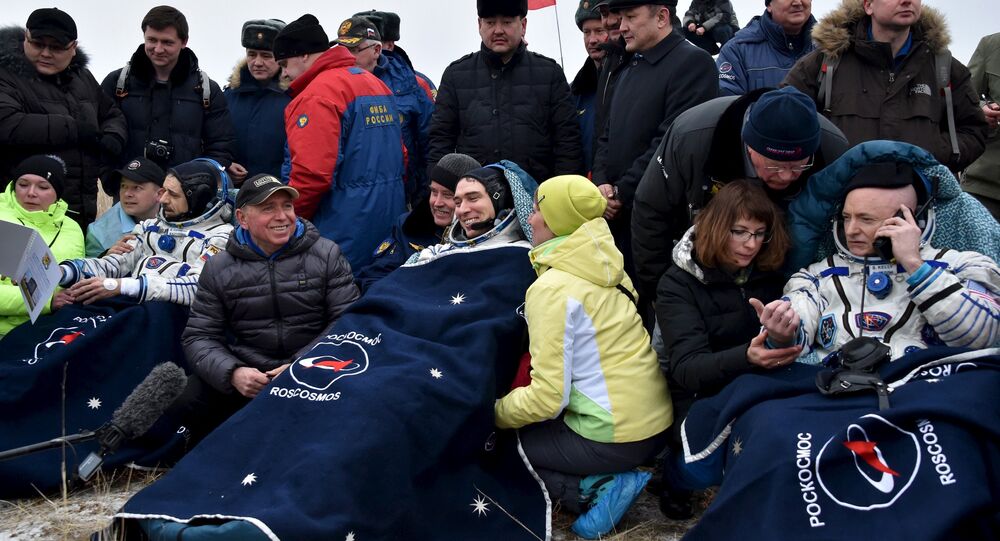 "The reentry vessel has landed 147 kilometers [91 miles] away from the city of Zhezkazgan, Karaganda Region, in the Republic of Kazakhstan," the representative told RIA Novosti.

Some 200 servicemen, as well as 12 Mi-8 helicopters carrying special equipment, four An-12 and An-26 transport planes and 18 all-terrain vehicles were involved in the spacecraft search-and-recovery operation.

"The crew members are feeling well. The returned space travelers will be examined by doctors, and later Kornienko and Volkov will return to the Star City, while Scott Kelly will fly to the United States," the spokesperson said.

#Thanks for following our #YearInSpace The journey isn't over. Follow me as I rediscover #Earth! See you down below! pic.twitter.com/7byNy6fMG4

During the mission, the crew carried out a number of important scientific experiments.

Scott Kelly published the photos of the first flower ever grown in space.

NASA underscored that this successful experiment paved the way toward a manned Mars mission.

Moreover, European scientists collected tiny mushrooms growing in Antarctic rocks and sent them to the International Space Station. The Cryomyces antarcticus and Cryomyces minteri were planted aboard the station in conditions close to those on Mars and kept in cells on a platform for experiments.

My one-year crewmember Misha Kornienko and I on day 300 aboard @space_station! #YearInSpace pic.twitter.com/qny9h29mVP

After 18 months, more than 60 percent of the mushrooms' cells remained intact, namely with functioning DNA. According to the authors of the study, these results will help in a further search for life on Mars.

The ISS members shared their New Year wishes in an exclusive interview with Sputnik.

Russian cosmonauts Yury Malenchenko and Sergei Volkov conducted a spacewalk on the ISS performing an experiment called "Restoration" to repair the spacecraft. And they took mesmerizing photos. This is probably the best selfie ever.

Scott Kelly amazed the world by playing Ping-Pong in the conditions of microgravity with two hydrophobic paddles and a sphere of water.

Using a 4K-camera, the crew filmed a stunning footage of an effervescent tablet dissolving in a floating ball of water.

Scott Kelly took a series of photos of the Earth from an altitude of some 400 kilometers. Just look at the beauty and fragility of the world.

Needed a little humor to lighten up a #YearInSpace. Go big, or go home. I think I'll do both. #SpaceApehttps://t.co/Ift8VdDR4C

By the way, Tim Peake, in his turn, unintentionally trolled an unknown woman on the Earth after he had mistakenly dialed her phone number.

I'd like to apologise to the lady I just called by mistake saying 'Hello, is this planet Earth?' — not a prank call…just a wrong number!

Undoubtedly, the crew's work in space made a great contribution to science.

The crew members are expected to be replaced by Russia’s Aleksey Ovchinin and Oleg Skripochka, as well as US’ Jeffrey Williams, who are scheduled to take off aboard the Soyuz TMA-20M on March 19.