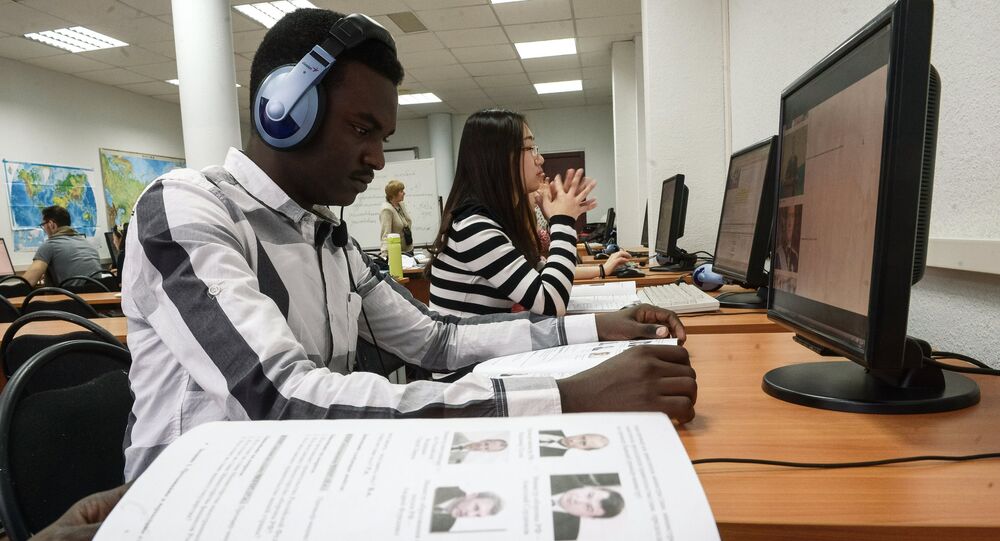 Those who've always wanted to read the untranslated literary masterpieces of Pushkin, Tolstoy and Dostoyevsky now have the opportunity to study Russian online: the Institute of the Russian Language has presented a new internet-based teaching platform which makes the best use of modern communication technology.

© AFP 2021 / JONATHAN NACKSTRAND
'Edward is Fine': Snowden's Russian Improves After Over 2 Years of Living in Russia
All those who are eager to learn Russian have now got a chance: the Institute of the Russian Language has presented a new teaching format, an online educational platform which is part of a developmental learning environment — a portal for studying Russian.

A presentation was made on Saturday at the international forum “The Russian language: History and modernity”, held at the official office of Russia at the UN in Geneva.

Another goal of the new web domain is to unite the Russian-speaking diaspora around the world and preserve the Russian language for bilingual children, the children of the Russians living abroad, according to Mikhail Osadchy, the Institute’s Vice-Rector for Science.

“The Russian language is one of the major languages, and the language is beginning to vary,” he noted.

“English has dissolved, dispersed into such variants which are not similar phonetically, lexically or grammatically. In fact, exactly the same is happening with the Russian language.”

So the linguists started thinking about how they can ensure the overall standardization of Russian language teaching in the world as a second and as a foreign language, as a native language and a second language for bilingual students.

According to the scientist, the problem of providing schools which teach the language with textbooks and providing libraries with Russian literature in a timely manner will probably always be “insurmountable and intractable”.

“There will always be barriers of cost, transport, logistics, etc. The only tool to solve this problem in the very beginning is the development of modern communication technologies, the development of e-learning, in the online mode, with a constant presence to ensure those who are studying the Russian language do so with modern materials, modern developments,” he said.

“Many foreign language teachers continue to believe that a language cannot be taught via the Internet. Still, the best way of studying a language is either a mother or a live teacher. But we probably need to take the best from any innovation. Surely the Internet, remote forms of learning and the transmission of information have their advantages, which in combination with traditional methods can bring great benefits,” Osadchy said.

© Sputnik / Vladimir Viatkin
Moscow State University Professor: Russians Stay Russians Even When They Speak English
“Now we are entering a new phase of the project, the final stage: the development of the educational platform itself, we are beginning to implement it throughout the work of the centers for the study of the Russian language, but also by introducing it in the educational systems of other countries,” Osadchy said.

The institute is also working on a program to train officials and civil servants for public appearances, now that the Russian State Duma (the lower chamber of the Russian parliament) has made the participation of candidates in debates compulsory.

Interestingly enough, some linguistic studies suggest that to an English speaker, for example, Russian grammar is more alien than German, but, since it's still part of the Indo-European family, less alien than Japanese.

However, if one is used to the grammar of languages such as English, French, German, or Spanish, then it can come as a bit of a nasty shock. It can be highly logical and literal while simultaneously being esoteric and indirect.

It will have more familiar features (such as genders, inflections, and some grammatical aspects) for those who are familiar with Classical Latin, as well as those who know other Slavic Languages.