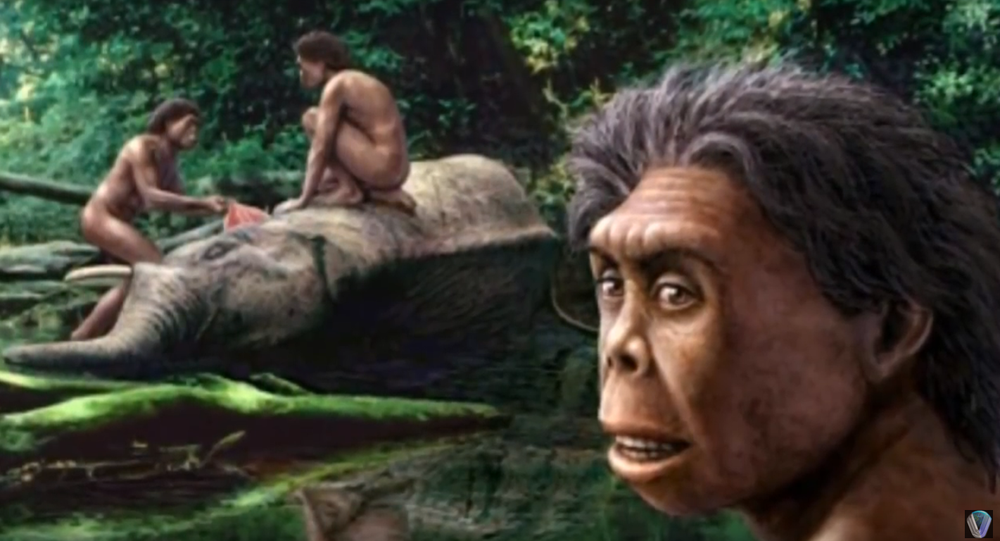 A claim from French researchers that enigmatic “hobbits” - tiny people that lived on an Indonesian island thousands of years ago - were not Homo sapiens has split the scientific world, fueling discussion over the nature of these mysterious creatures.

The dwarf people, named Homo floresiensis, after the island of Flores in Indonesia where they were discovered, were about one meter tall and weighed some 25 kilos. The unique hominids are believed to have walked the island over 15,000 years ago.

​Since the first detection of the so-called hobbits in 2003, scientists from around the world have put forward contradicting theories of the genesis of the miniature people.

© Flickr / OetziTheIceman
Europeans Were Just Another Wave of Migrants, Scientists Say
​One major conjecture suggests that the Flores species were initially representatives of Homo erectus, but evolved into a sub-species as a result of a process known as “insular dwarfing.” The process suggests that once animals get into an isolated environment with limited resources, such as food, they gradually downsize over time to survive.

Under this theory, some Homo erectus could have been cut off by rising sea levels from the mainland, during migrations over land bridges.

Another hypothesis suggests that the Flores people were actually ancestors of contemporary humans but suffered an unspecified disease. This explains why the “hobbit’s” brain was the size of a grapefruit, according to postulate.

© Flickr / Allan Ajifo
Don’t Fear the Crazy, the Mini Brains Are on the Way!
But adherers of the grapefruit theory can’t agree on what the tiny people may have suffered from. Some researchers point to genetic disorders, others say it was either dwarf cretinism, commonly caused by a lack of iodine in the organism, or a form of microcephaly that usually leads to shrinkage of brain.

The latest study published in the Journal of Human Evolution has stunned the scientific world; it says the hobbits are a species altogether different from Homo sapiens.

To come to this conclusion a group of researchers examined the skulls of the ancient creatures using high-resolution images generated in Japan.

“There were no characteristics from our species,” Antoine Balzeau, a scientist at France’s Natural History Museum, said to AFP, after analyzing information contained in skull bone layers.

The researchers still maintain the possibility that the hobbit could be a reduced-size type of Homo erectus, which showed up on the neighboring island of Java several million years ago. It is not known whether Homo floresiensis belonged to a species of its own.

You're One in a Million: Manchester Mom Gives Birth to Black & White Twins