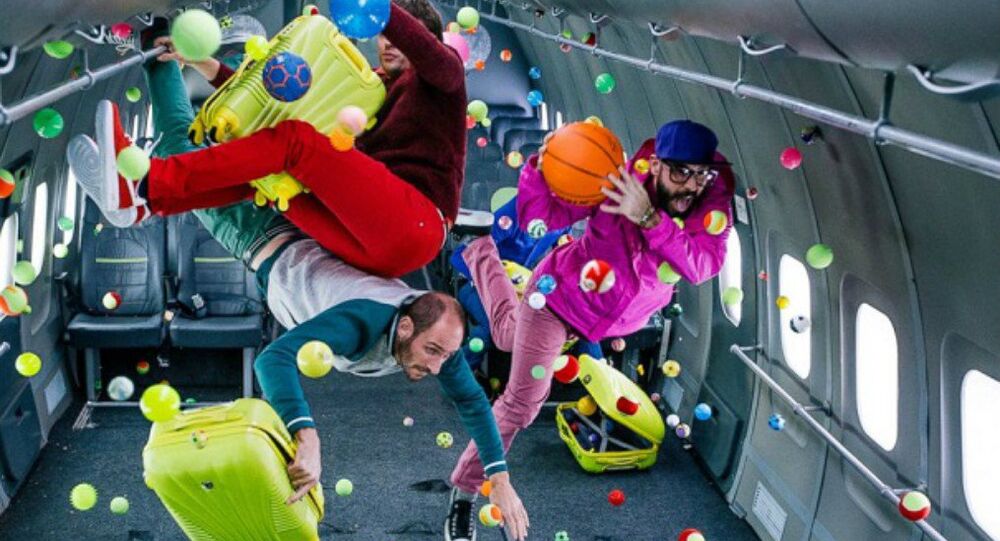 In their new music video, OK Go, an 'alternative rock' band known mostly for their sponsored content-wave commercial success generated through advertisements and music videos have now made a music video filmed in artificially generated low gravity (a first in the industry), using a Russian airline's plane.

According to S7 Airlines' press release, the video was filmed on an Il-76MDK passenger liner, with each flight giving the group 15 30-second intervals of "low gravity" during a rapid downward descent by the plane at 45 degrees. A total of 21 flights were made — thats more than actual cosmonauts in training perform in a year! Overall, the band and crew spent two hours and 15 minutes in low gravity.

OK Go — Upside Down & Inside Out

Hello, Dear Ones. Please enjoy our new video for "Upside Down & Inside Out". A million thanks to S7 Airlines. #GravitysJustAHabit

The two dancing flight attendants in the video were professional air gymnasts Anastasia Burdina and Tatiana Martynova, who shared their thoughts on this unusual filming process. Anastasia says her life will never be the same again.

"The first flight was incredibly hard — the instructors could barely catch us after every performance, but at the same time, it was amazing! It's impossible to describe the feeling: you're weightless, but have total control over where you go and why. You just fly, with a huge smile on your face! Now I keep telling everyone I know my life will never be the same!"

And Tatyana is incredibly proud of taking part in such a historic project.

"This was a unique, difficult and amazing experience. I'm so happy that we were the first people in the world to attempt such a feat! Its a honor — and a dream come true, because now I'm one step closer to the space industry!"

The filming was done in Russia, at the Gagarin center for cosmonaut training. Professional instructors from the center worked with the musicians and crew, and were on board for the entire 'flight', offering assistance and helping turn the band's creative dreams into reality.