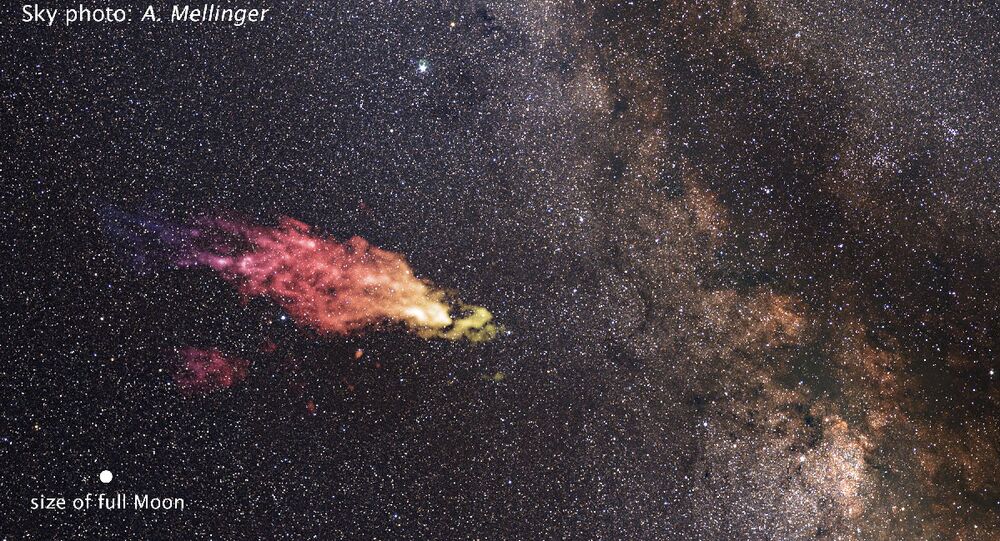 An invisible gas cloud of spectacular proportions, moving at some 700,000 mph, is believed to be heading for a collision with our galaxy, releasing enough energy to form over two million new stars.

​But nobody alive on Earth today should worry, as it is expected to occur some 30 million years in the future, according to research published in the Astrophysical Journal Letters.

© NASA . ESA
In a Galaxy Far, Far Away: Hubble Captures First Ever Predicted Supernova Images
The cloud was discovered in 1963 by American astronomer Gail P. Smith, and later named after him. Since then, the “Smith Cloud” has been thoroughly examined by various astronomers using the Green Bank Observatory and the Hubble Telescope.

According to estimates, the cloud formed on the outskirts of the Milky Way during the period when dinosaurs walked the Earth, approximately 70 million years ago. The Smith Cloud trajectory has been poetically described by astronomers as: “what goes up must come down.” After forming, cosmologists note that the cloud was blown away from the Milky Way and then, reaching its farthest point, turned back.

“It’s [the path of the cloud] telling us that the Milky Way is a bubbling, very active place where gas can be thrown out of one part of the disk and then return back down into another,” Andrew Fox, of the Space Telescope Science Institute in Baltimore, Maryland, leader of the research team said, outlining that movement of gas reflects changes constantly occurring within our galaxy.

Using the Hubble Telescope, astronomers have distinguished chemical components of Smith Cloud, including a rich sulfur content, indicating that it was formed in the Milky Way.

According to astronomers, the gaseous region is approximately 11,000 light-years long and 2,500 light-years wide. If it was visible to the naked eye from Earth, it would span across the night sky at a distance equal to 30 times the diameter of the full moon.

Our Milky Way galaxy contains some 100 billion suns and, when the cloud hits it, there will be "a spectacular burst of star formation,” releasing an amount energy thought to be able to create up to two million new stars.

© NASA . NRAO/AUI/NSF; Dana Berry / SkyWorks; ALMA (ESO/NAOJ/NRAO)
'A Beast in the Infrared': Brightest Galaxy Is Ripping Itself Apart
“Our galaxy is recycling its gas through clouds, the Smith Cloud being one example, and will form stars in different places than before,” Fox said.

Astronomers are still attempting to explain why the cloud moved away from our galaxy in the first place.

“There are theoretical calculations suggesting that a dark matter satellite could capture gas as is passes through the Milky Way disk and that may be the amazing circumstance we are witnessing,” Jay Lockman, an astronomer with the National Radio Astronomy Observatory (NRAO) said.